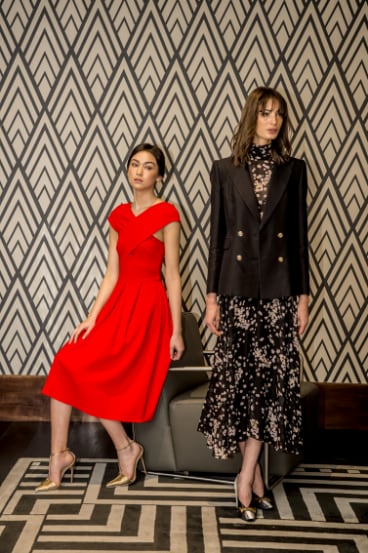 There is almost no doubt that Meghan, the Duchess of Sussex, will wear at least some local designers during her visit to Australia with Prince Harry this week.

But what has fashion pundits in a flutter is which designers she will wear, given strict protocols around dress standards and the fact the palace buys the clothes for the royals.

One fashion PR insider, who spoke on condition of anonymity, recalled a time when an order for a dress by a top-name Australian designer arrived through its online shop, to be sent to "M Markle" at Buckingham Palace. Unsurprisingly, the designers initially thought it was a prank. Not so.

Gazing into her crystal ball, David Jones' head of womenswear and accessories, Bridget Veals, predicts Meghan will mix favourites with brands she has never worn before.

"We are hoping to see her in some more Camilla and Marc and Karen Walker. We think she will be a fan of Scanlan Theodore and Zimmermann, which she can also wear for evenings," Ms Veals said.

"Meghan is very 'wearble' … she's sophisticated, her approach to fashion is very accessible. She has a nice style. It's quite inclusive, really," Ms Veals said.

"She will also be dressed appropriately but she may choose cottons and silks that [Australia] does particularly well. It's down to a sleeve length." 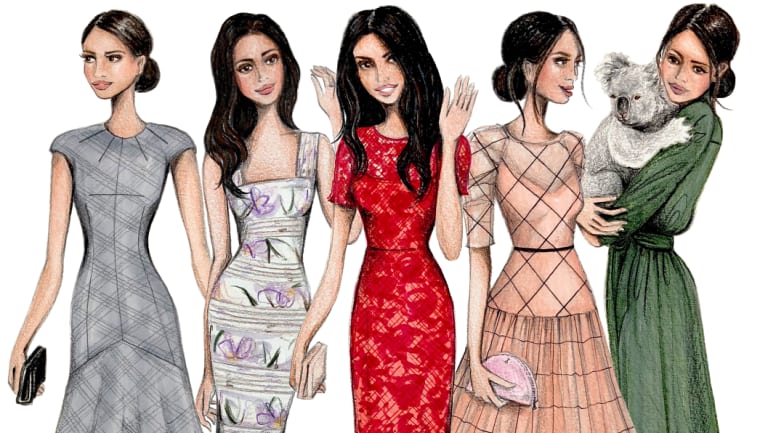 Illustrator Alexandra Nea has captured a series of ‘fantasy’ outfits for Meghan Markle’s Australian visit to coincide with Frocktober.

Illustrator and royal sketcher Alexandra Nea has turned her imagination – and pencils – to her own version of Meghan's fantasy tour wardrobe.

"[Meghan] goes for classic silhouettes that are figure conscious but very flattering. She knows how to dress for her figure. I think that comes from being an actress, being in Hollywood," Nea said. "Her style has changed a lot since becoming a royal but she still knows how to enhance her own figure."

Nea said she has watched Meghan for some time and says her most flattering looks "are tailored on the top half and a fluted skirt. Her legs are very slim but it adds a little movement to her figure".

Embracing the royals' penchant for mixing high street brands with designer, Nea has sketched the Duchess in labels including Witchery, Ginger and Smart, Lover, Zimmermann and Camilla and Marc, the last of which Meghan has already worn in public.

Nea said she purposely sketched Meghan in some looks that "are a little brighter and bolder than I have seen her wear but coming to Australia, I think she should relax her style a little bit".

She hopes the illustrations, which she will continue once the royals arrive, will also raise awareness for Frocktober, the annual fundraising drive to support ovarian cancer research that encourages women – and men, if they choose – to wear a dress to support the cause.

While any designers dressing the duchess are remaining tight-lipped about their coup, brands have been scrambling for months to try to get a piece into Meghan's hands.

But freebies don't fly with the Royal Family, which buys everything its members wear.

So it remains to be seen which brands Meghan will choose during the tour. Suffice to say, some designers are going to be in for a very pleasant surprise.

Jessica Simpson overcame this huge hurdle to publish her memoir

Jessica Simpson overcame this huge hurdle to publish her memoir