Home » Fashion » I spent nearly £1k preening myself for labour – I got my bikini line waxed, a full body tan the day before & fake lashes

MUM Darryl Baker loved getting glammed up for a Saturday night snap with her mates.

And she knew after delivering her baby girl, who arrived in June, there would be a lot of snaps. 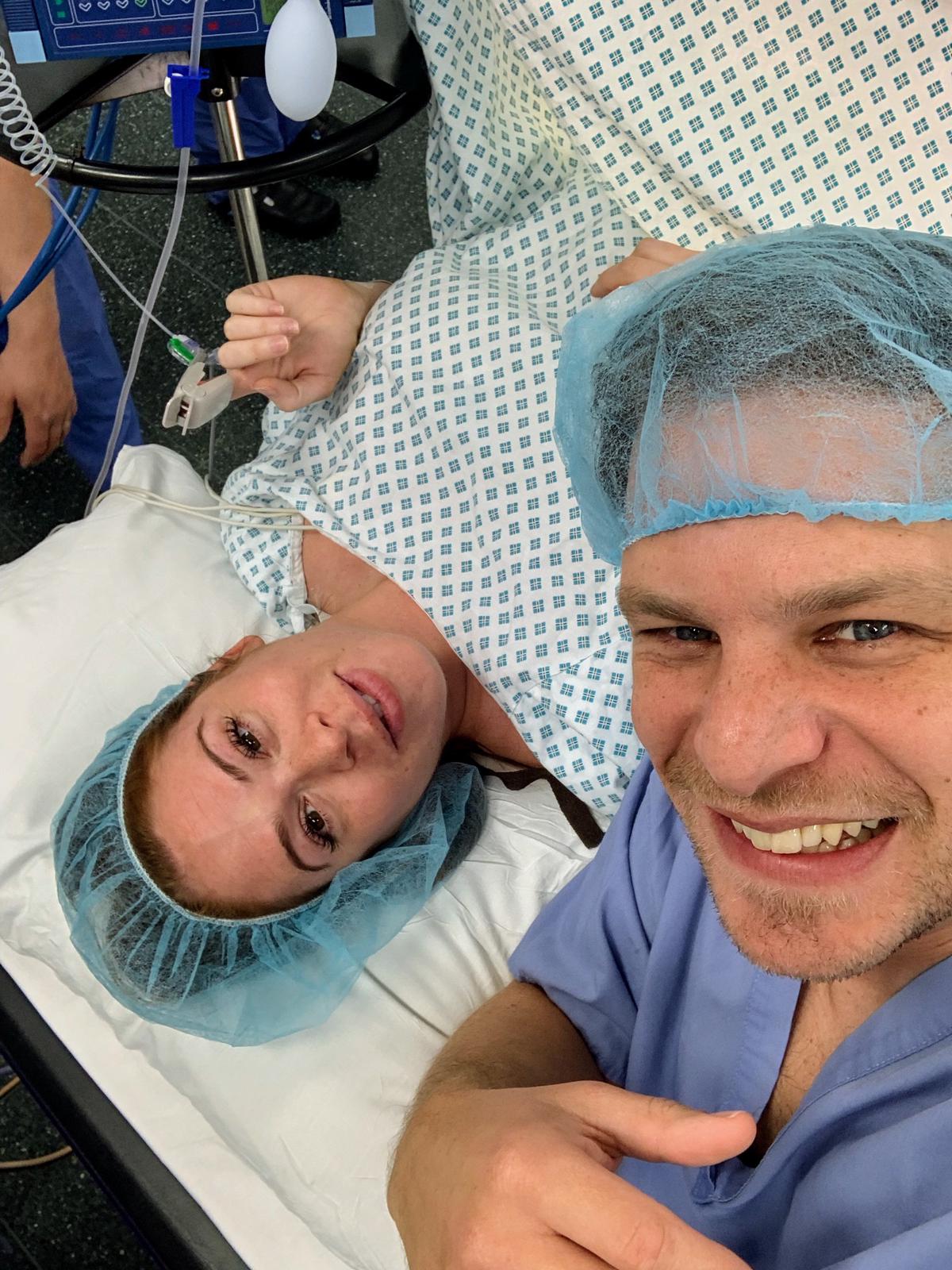 So beforehand 33-year-old Darryl, a writer from London, spent an astonishing £800 prepping herself for labour.

She had her eyelashes extended, hair dyed and the day before she was scheduled for a c-section even coated herself head to toe in fake tan.

Darryl, who is married to 41-year-old sales manager Lee, would have even had Botox had she been allowed.

Now mum to Blake, who arrived weighing 6lb 10oz at Barnet Hospital, she tells her story: 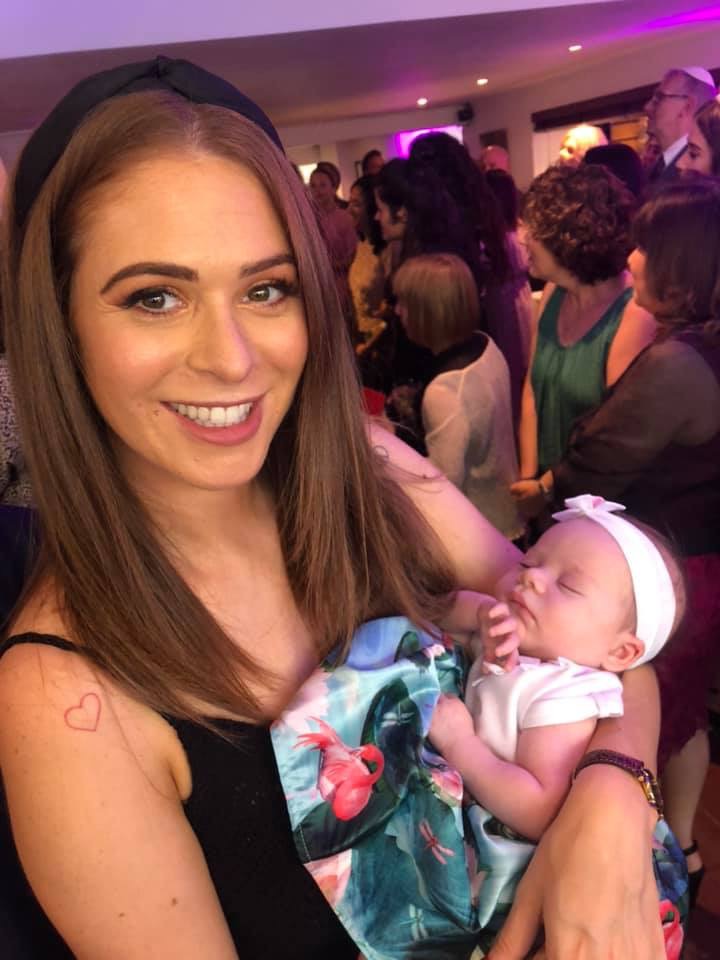 WHEN I was told midway through my pregnancy I couldn’t give birth naturally as my placenta was blocking my cervix, my first thought was ‘do whatever you need to get her out safely.’

But it was quickly followed by, ‘well at least that means I can get fake lashes for the birth’.

A caesarean wasn’t my birth plan of choice, but there was no other option so I made the best out of the situation.

Or should I say I made myself look the best for the situation?

I was never planning a smokey eye and red lip, but there were plenty of ways I could add some subtle glamour to my hospital look.

A few years back my sister had lashes put on just before her due date, but because my niece decided to stay put for an extra 12 days, her extensions ended up looking more glum than glam. 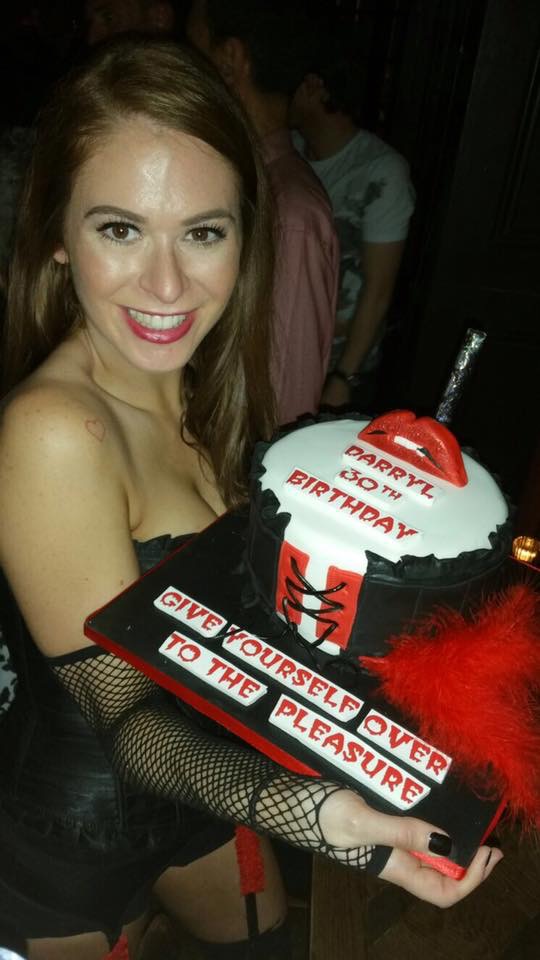 But with a C-section thrust upon me there was no danger of that happening to me: I could be primped and preened to perfection.

As soon as I got my delivery date, I put pen to paper and made a list of beauty treatments I wanted, and set about ticking them off one by one – it ended up costing me around £800.

I booked a lash and hair appointment, as well as a brow tint and thread and a cheeky bikini wax thrown in too.

I wasn’t about to be the most exposed I’d ever been in public looking like a ‘70s throwback.

Admittedly, lying still for hours on a hard beauty therapist’s bed having individual lashes glued to my own wasn’t the most comfortable thing for my very pregnant body, but the back ache and leg cramps were totally worth it.

Beauty is pain as they say.

I spent a good £500 on lash prep and upkeep, getting the initial treatment months before to make sure I liked the results and knew how best to maintain them.

This was the last bit of pampering time I was going to get and so I really went for it, including a massage just before C Day.

I wasn’t about to be the most exposed I’d ever been in public looking like a ‘70s throwback.

And the way I saw it, a hell of a lot of photos were going to be taken on that special day – including as I lay waiting to be cut open – and I wanted to look nice in them.

It’s as simple as that. I was more than happy to spend time and money on this, and the end pictures aren’t just your standard Saturday night snaps, these are my most treasured photos ever.

The final task the night before my section was to fake tan, which I did at home as spray tans aren’t allowed while pregnant.

I decided on a natural glow, but only on my face and arms as I’d done a full body weeks earlier for my baby shower and at nearly full term, it left me a panting and sweaty mess like I’d done an hour in the gym.
Working your mitt around a giant bump is nearly impossible.

I was about to drop another £60 on a mani and pedi, but nail varnish has to be removed before surgery. 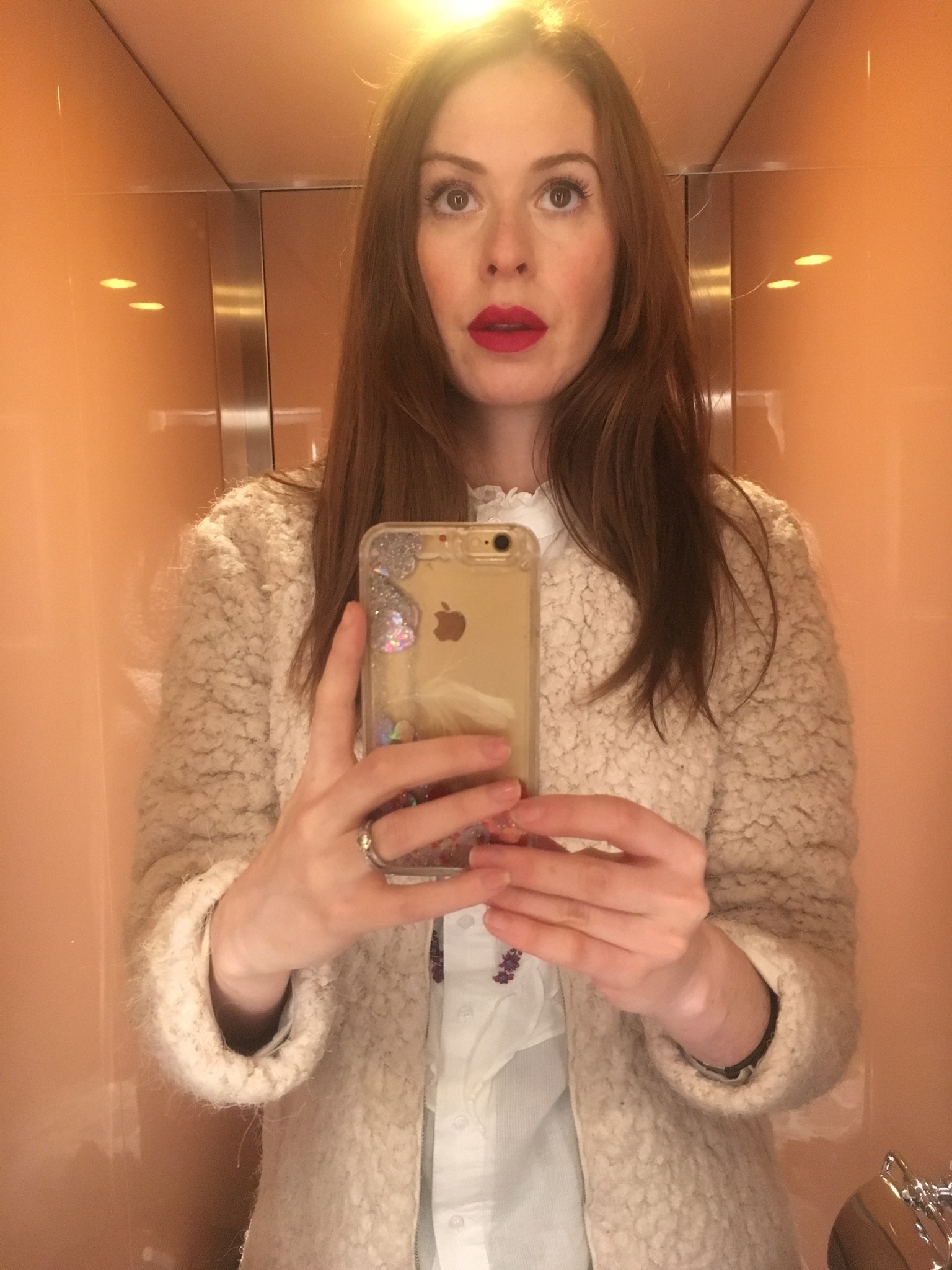 Honestly, if I’d been allowed Botox (another pregnancy no no), I would have smoothed out my crow’s feet without a second thought.

Looking at the photos seven months on, I’m pleased I went all out. A caesarean meant there was zero chance of me getting a sweaty, red face with frizzy hair plastered to my head, so why not look like the type of me I like to see in photos?

And past the lashes, brows and bottle glow, is the look of pure love, tinged with just a hint of new mum fear.

Unfortunately I also look high as a kite in some of the photos thanks to all the drugs I was pumped with, but still, lashes are spot on.

The only tiny regret I have is the wax. I’m not sure if it was a botched job, sensitive pregnancy skin or a mix of both, but that was not a pretty sight.

I spent the days leading up to motherhood with a bag of frozen peas between my legs worrying what the team of doctors would make of my red-raw nether regions. 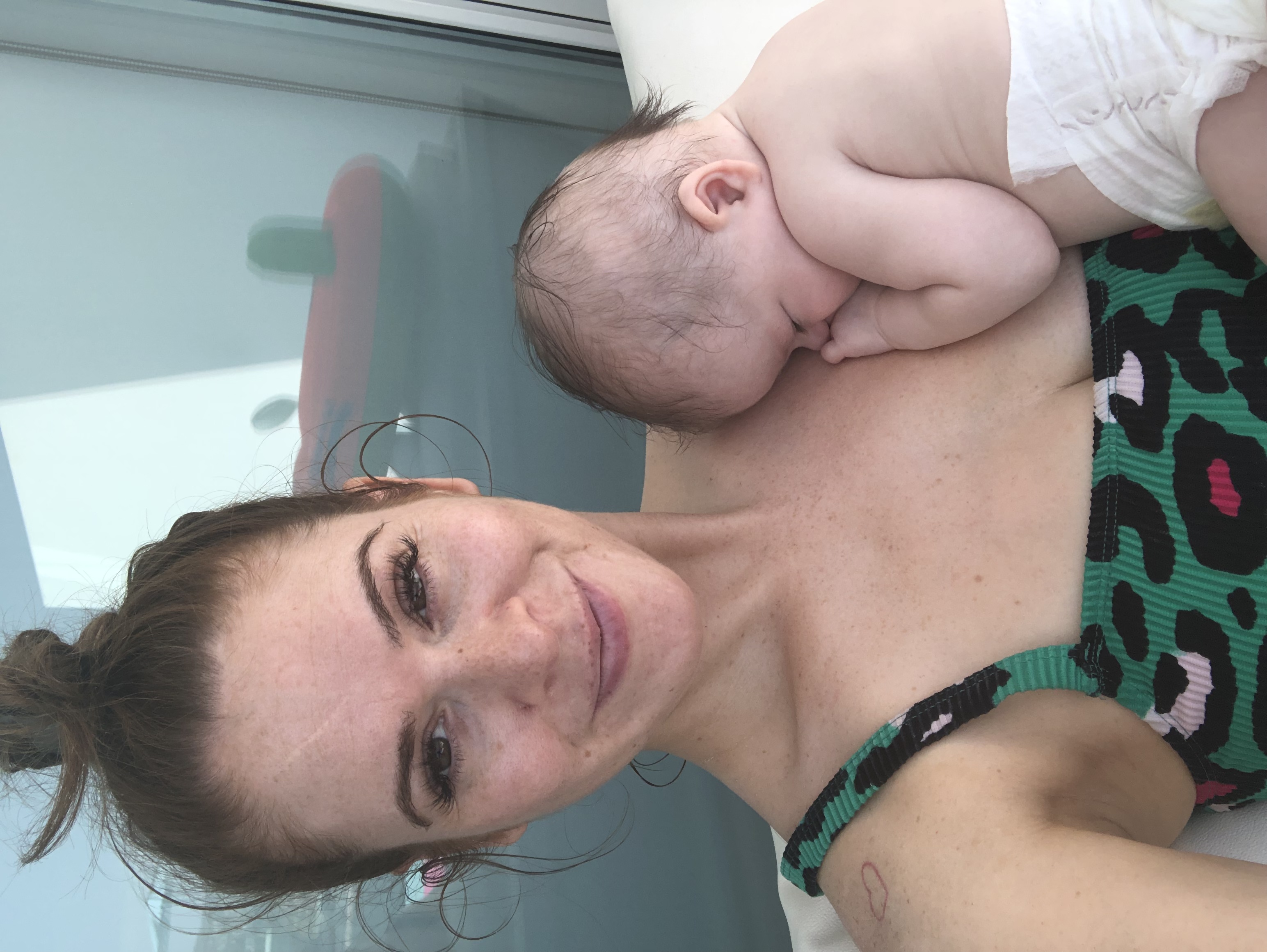 Thankfully, no medical staff commented on my bikini line. But seriously, it was a mess.

No one that I know personally criticised, but did get comments on how good I looked after child birth, so it paid off!

Also I lost a lot of blood and needed a transfusion and a few midwives told me they were surprised as I looked so well.

But since then, my hair’s lucky if it gets washed once a week and my fake tan bottles have gathered an impressive layer of dust.

I’ve kept up my lash game, but I go weeks between appointments meaning I often look like a couple of spiders have curled up and died on each eye. That, paired with a load of under eye concealer, is the only make-up I tend to wear now.

And I’m still patiently waiting for my Botox treatments, because although I’m vain, I’m a mum first and foremost and injectables are strictly off limits while breastfeeding.

A mum who gave birth in a forest delivers sixth baby without a midwife or pain relief next to playground in her garden – and 1.4 million people watched, including her kids

Meanwhile, meet Simone who gave birth in a STREAM.

And this mum gave birth outside a strip club… we bet she didn’t expect that.