Home » Fashion » I stockpiled dozens of eggs, fruit & sauces but had to bin it all – I don’t care I’m doing the vulnerable out of food – The Sun

WHEN the coronavirus crisis first started to rear its ugly head, single mum-of-two Emmie Shute, 47, bulk bought everything she could think of.

Despite only having three mouths to feed, the factory worker from Bournemouth, Dorset, spent a whopping £250 on one shop and grabbed as much fresh fruit, veg, eggs and meat off the shelves as she could. 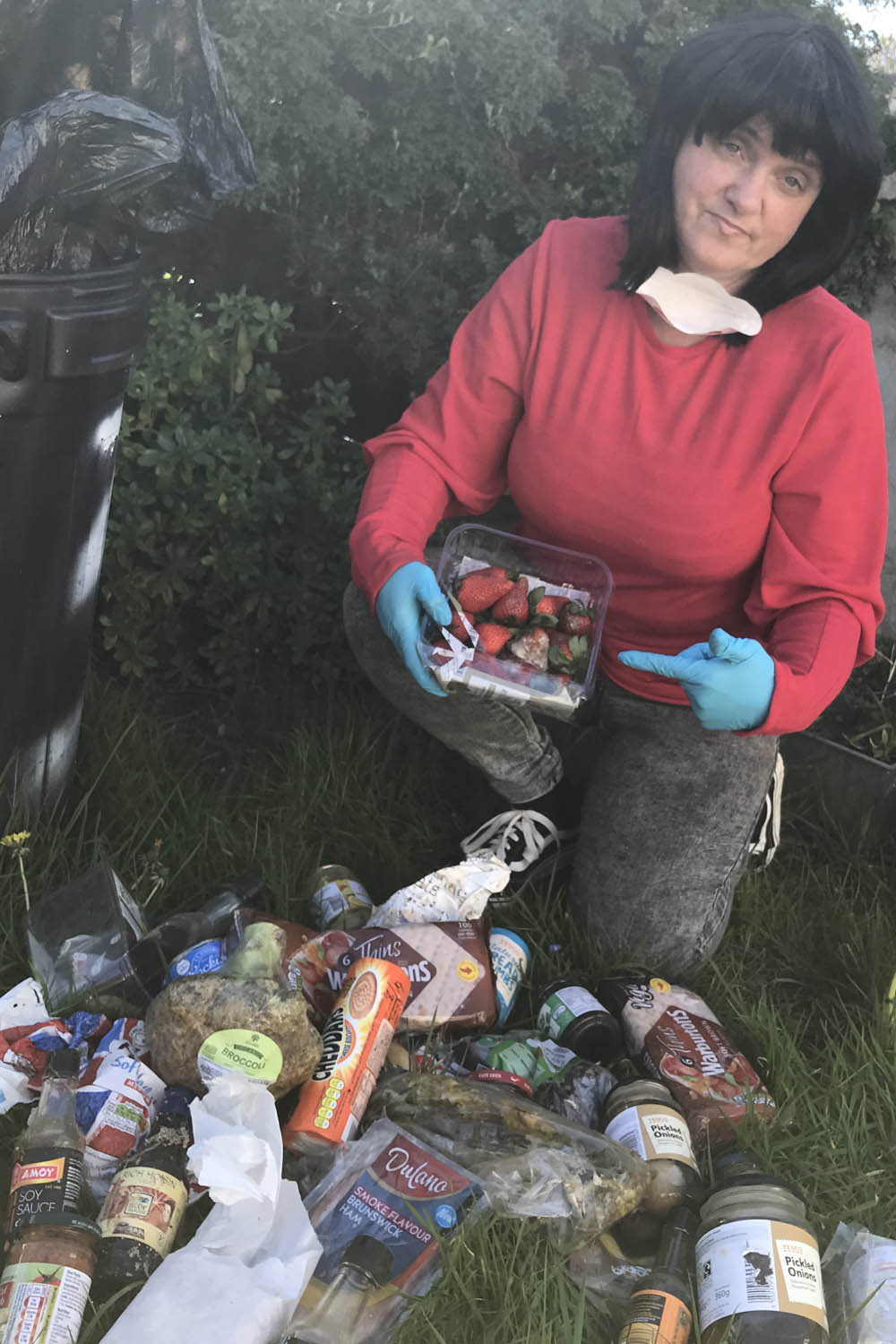 Unsurprisingly, she was soon having to throw most of it out after it went mouldy sitting untouched in her cupboard, but it's not stopped her buying more.

Here she tells Fabulous why she's a shameless stockpiler and won't stop, despite all the desperate pleas.

The bin bag was groaning under the weight of unused food I’d stockpiled when the coronavirus crisis hit. 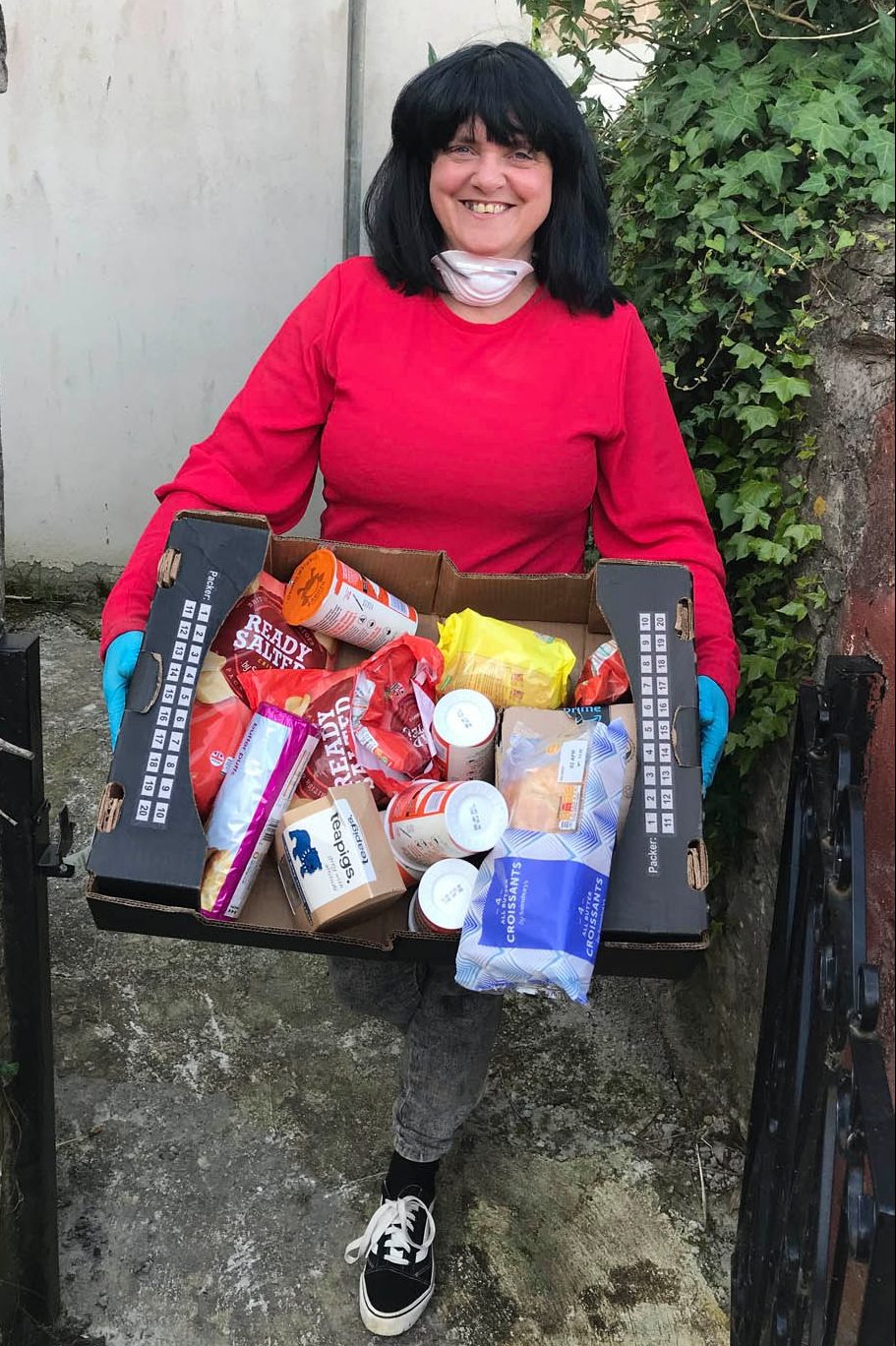 But as I heaved it into the already overflowing bin, I didn’t feel a shred of remorse.

A single mum, I’d do anything to protect and provide for my children, Henry, 15, and Katie, 11 – especially now.

I’ve never been a hoarder in the past, but when the panic buying started, I just did what everyone else was doing.

In the first week, I packed my fridge and cupboards full with £250 of groceries, including lots of fruit, veg, biscuits, eggs, tinned food, pasta and 50 toilet rolls.

Like the rest of the country, I was terrified of what was to come. 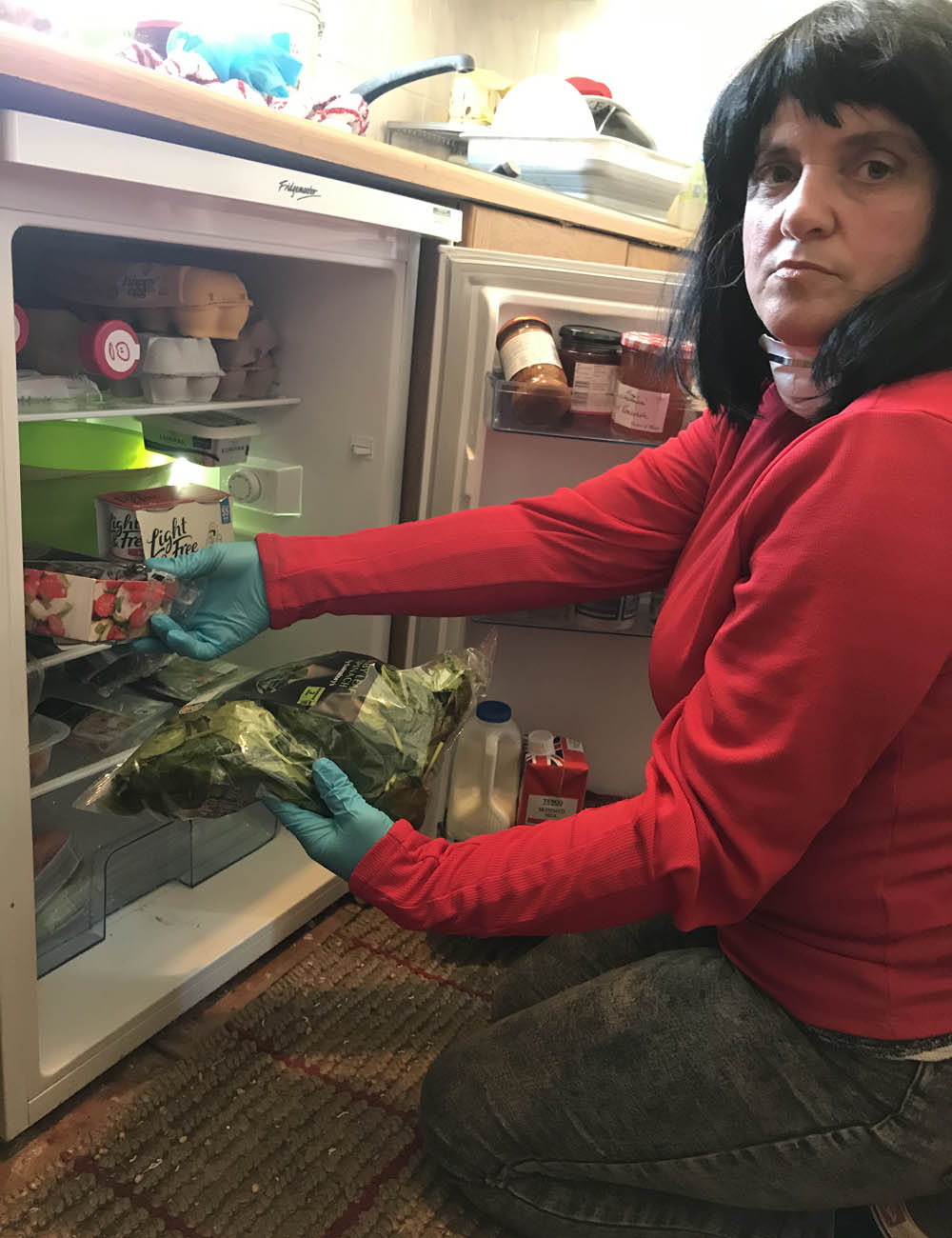 The Government was telling us not to panic and only buy the essentials, but what if I got sick and couldn’t go to the shop? Would food deliveries stop, and the supermarkets run out of food to sell?

All of a sudden it was like we were plunged into a disaster movie.

With only a small freezer, however, I wasn’t able to store the vast majority of the fresh produce, so it went off and had to be binned within the week. 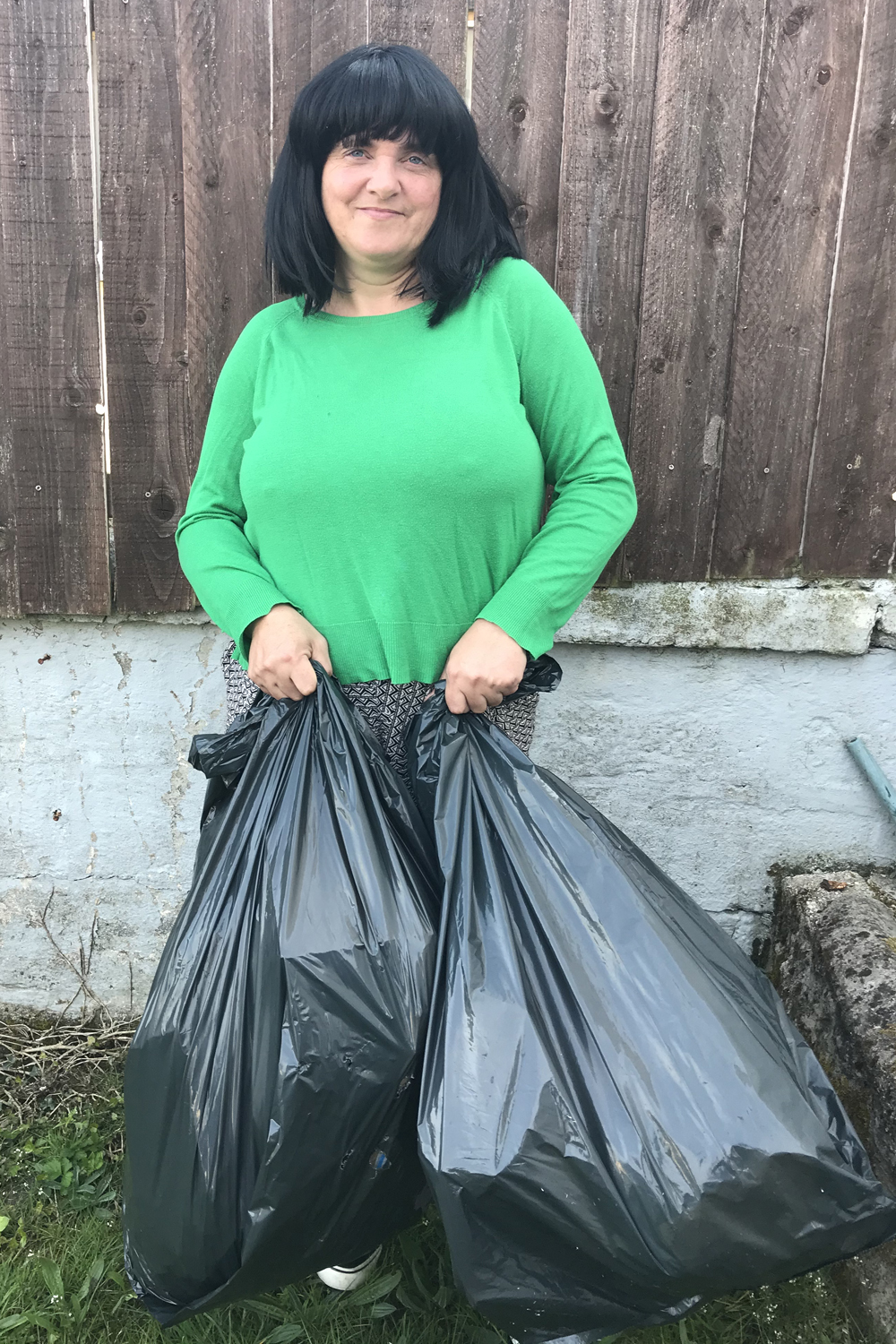 The kids, who normally eat things like spaghetti bolognese or sausages and chips for tea, simply refused to touch a lot of the other things – like cans of chickpeas, pickled onions, and teriyaki sauce, which I wouldn’t normally buy, but I thought I should stock up on non-perishables.

Needing to make room for things they did like, I tried to donate them to a local homeless charity and women’s refuge, but whenever I rang they never answered the phone.

When I offered them to friends, they were too scared to accept them in case they contracted coronavirus – even though we have no symptoms – so as a last resort, I put them in a box on the street with a sign to say they were free, but my neighbours didn’t want them either.

Judging by their similarly overflowing bins, they’re in exactly the same situation as me.

With only a small freezer I wasn’t able to store the vast majority of the fresh produce, so it went off and had to be binned within the week.

As well dumping those cans, I’ve also had to chuck away dozens of toilet rolls, which got wet by accident from the shower, Jaffa Cakes and Bourbon Creams – because I was worried I saw a mouse bite on one, and panicked that all the extra food lying around was attracting rodents – plus a dozen eggs that got cracked when the dog tried to eat them while my back was turned.

But having to chuck £60-worth of food hasn’t stopped me stockpiling even more during each weekly shop.

Even though the factory where I worked in admin closed two weeks ago and we’ve been living on my savings while waiting for my Universal Credit to come through, I’ve been using my savings for supplies.

Money is tighter than ever, but I refuse to scrimp on food now. 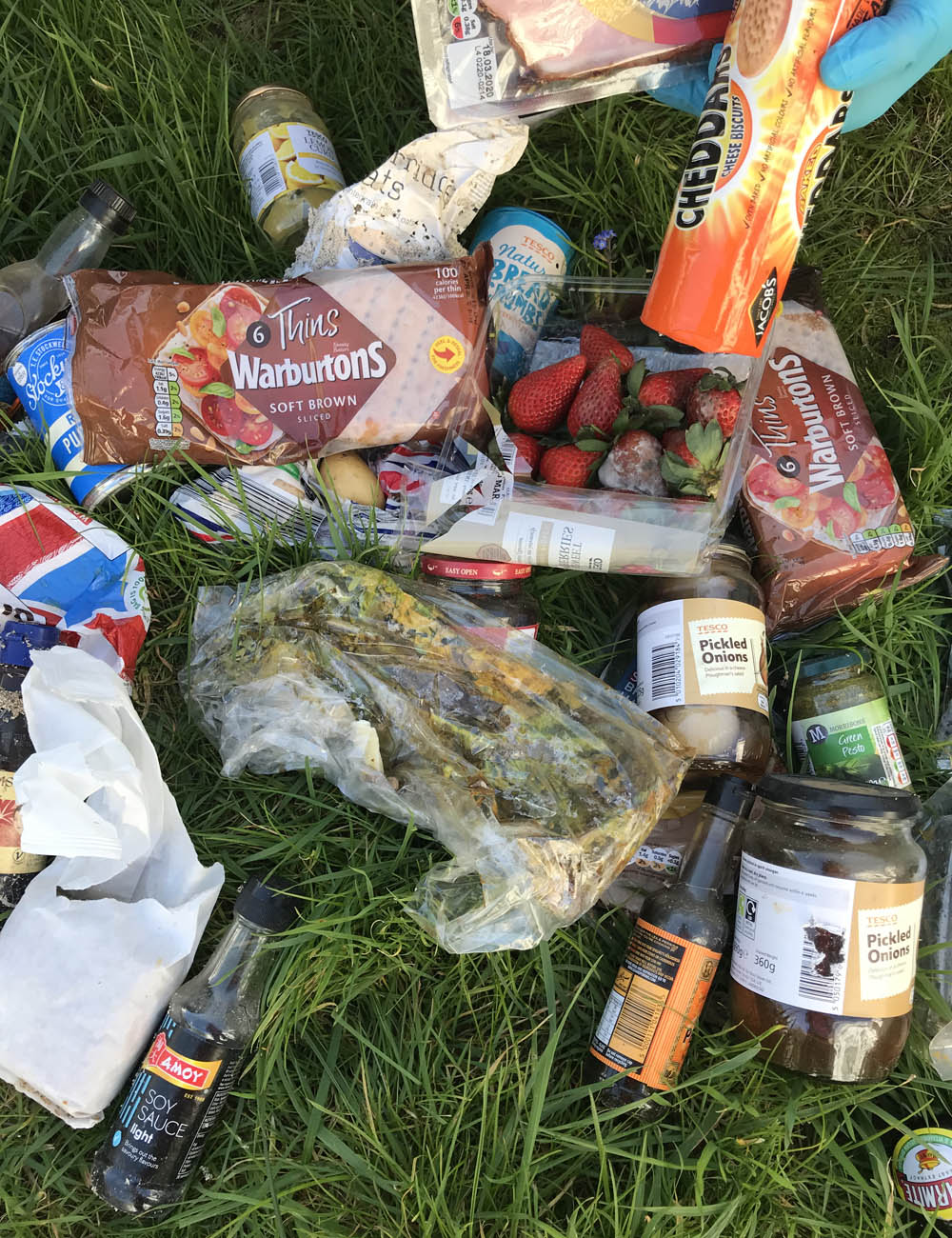 I still want the kids to have treats like biscuits and Easter eggs – now more than ever, I want to spoil them.

Their lives have been turned upside down.

They can’t play football or netball or go to the cinema like they used to; they’re anxious and confused, and food is one of the only pleasures we have left.

It gives a structure to our day, it’s something to look forward to, and I don’t want to frighten them into thinking food is running out and we’re all going to starve.

I still want the kids to have treats like biscuits and Easter Eggs – now more than ever, I want to spoil them.

In the last week, many supermarkets have also stopped allowing children in, so I need to make sure I get enough in that one shop because I don’t want to leave them home alone more than is absolutely necessary.

On average, I’m now spending around £100 a week and throwing out around £10-worth.

I understand the criticism about food not being left for vulnerable people and key workers, but I don’t feel bad – it’s the supermarkets’ responsibility to order more and make sure they have enough stock in.

Besides, I truly believe everyone is stockpiling and having to dump more food than usual right now – just not everyone will admit it.

CORONAVIRUS CRISIS – BE IN THE KNOW

Don’t miss the latest news and figures – and essential advice for you and your family.

To receive The Sun's Coronavirus newsletter in your inbox every tea time, sign up here.

Get Britain's best-selling newspaper delivered to your smartphone or tablet each day – find out more.

The fact that Boris Johnson is currently in intensive care just reinforces my decision to keep doing it.

Even he isn’t immune from Covid-19 – it could strike any of us down at any time.

If I had to self-isolate for 14 days and there was no one who could drop food round for us, at least Katie and Henry would have enough in to keep going.

None of us knows what’s around the corner, for the country or ourselves.

And I’m not willing to take that gamble when it means my children could end up going hungry."

We previously brought you the story about the stockpilers who are protecting their huge hauls with everything from BB guns to chainsaws.

Plus, read about Georgia, who's self-isolating with her ex for the sake of her kids.

And finally, devastated mum Sarah shared a heartbreaking photo of her husband, who found out she'd lost their baby while isolating.