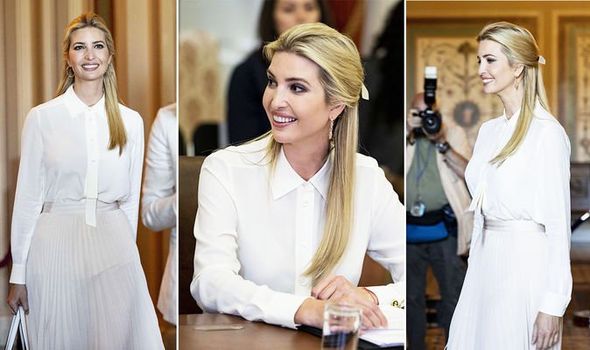 Ivanka Trump attended a roundtable discussion with the Senate Foreign Relations Subcommittee in Washington, USA today. The First Daughter sported a bold outfit choice for the meeting. Ivanka chose a sheer pleated skirt which she has been photographed in before. The $516 skirt featured a nude silk waistband which emphasised her svelte figure.

Although the material left little to the imagination, the number fell to her mid-calf.

On her top half, she wore a semi-sheer white blouse buttoned all the way up.

The summery look was completed with pointed white slip-on flats.

The blonde held a large with handbag in her hand before sitting down for discussions. She was also seen studiously listening to others at the meeting, as a file lay in front of her.

Her make-up was kept relatively natural with a slight smokey eye and a pink lip. 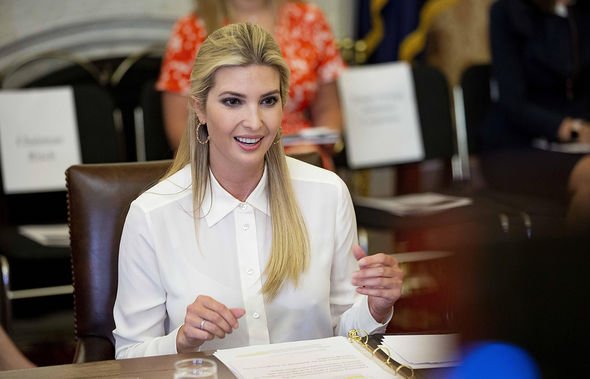 The meeting concerns the US strategy for implementing The Women, Peace, and Security Act.

With this legislation, the US hopes to increase women’s leadership in political and civil life by ensuring that women are empowered and have the resources needed to participate in political processes including preventing and resolving conflict negotiations.

Ivanka posted on Twitter ahead of discussions: “Today, I will be on the Hill unveiling the Administration’s comprehensive Women, Peace and Security (#WPS) Strategy #WGDP.

“Almost 20 years after @UN Resolution 1325, the U.S. is proud to show leadership as the first and only Country in the world with a comprehensive law on Women, Peace and Security, #WPS; bipartisan legislation signed into law by @POTUS Trump.” 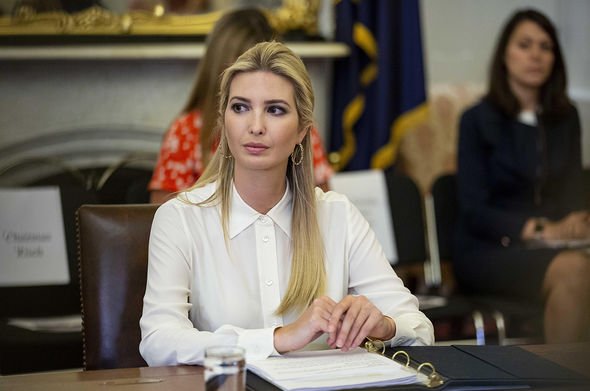 Ivanka flew to the Netherlands on Wednesday, again in her official role as senior advisor to the US president.

She wore a gorgeous dress with a bright and pretty floral pattern.

The white dress had a flowing midi skirt and voluminous sleeves with long cuffs.

The dress was pulled in with a belt that had ornamental flowers.

Its floral pattern has green foliage, with blue, pink an purple flowers.