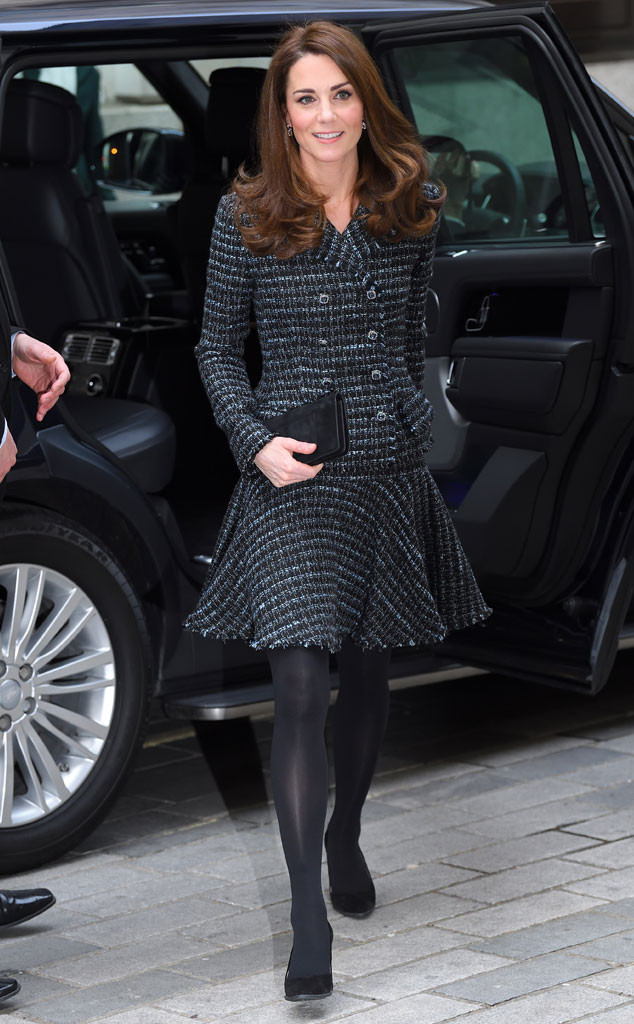 The Duchess of Cambridge arrived at Mercers’ Hall in a chic and sophisticated tweed suit consisting of a matching blazer and skirt. She also kept warm by wearing a pair of black tights and accessorized her look with a coordinating black Mulberry shoulder bag and pair of Tod’s black suede block heel pumps. In addition, she rocked her signature blowout and fans could just spot a pair of Kiki McDonough 18K yellow gold classics cushion-cut morganite and diamond drop earrings behind her luscious locks.

To see more of Kate’s best looks, check out the gallery below.

The conference brings together delegates from various mental health and education sectors to discuss how they can better tackle mental health issues in schools. During the event, Kate sat in on a number of panels and was welcomed by presenter Kate Silverton. Later on, Kate will attend a Gala Dinner to benefit Mentally Healthy Schools—a website she founded that gives teachers and staff lesson plans and tools to help promote mental health in their classrooms.

The royal has been a longtime champion of this initiative. As royal admirers will recall, she launched the Heads Together campaign with Prince Harry and Prince William in 2016. In fact, the two princes credited the duchess with coming up with the idea. She’s also supported organizations that address other health-related topics, including postpartum depression and children’s mental health.

It certainly has been a busy time for the mother of three. Just a few days ago, Kate attended the BAFTA Film Awards with her husband. The Duke of Cambridge has also had a packed schedule. While Kate attended the conference, William visited The Passage, the UK’s largest resource for those who are homeless. During his visit, the duke, who was just named patron of the organization, helped serve lunch and met with several volunteers.

Meghan Markle and Harry have also been busy. In addition to preparing for their first child, the Duke and Duchess of Sussex have attended several royal engagements. On Tuesday, for instance, the couple visited London’s Natural History Museum for a gala performance of The Wider Earth.