If you ever think you’re being a little too extra, just remember that Kim Kardashian exists. The selfie queen is known for wearing some pretty extravagant outfits, but this most recent one might take the cake. Kim Kardashian’s Gucci thong in her Instagram photo was the star of her outfit, and get this, it’s purportedly a vintage thong, as in, undergarments that aren’t not new.

Kardashian loves to rock underwear, and not much else. She posts countless nearly nude selfies and often wears only a bra as a shirt. Not that there’s anything wrong with that – Kardashian is open about her challenging workouts and she deserves to show off her body if that’s what she wants.

In a fresh Instagram post, the mother of three decided to shine the spotlight on her assets as well as her wardrobe choices. In true Kim K. fashion, the post was technically a promotion for a KKW Beauty product, but I’d venture a guess that few eyes were actually on said product. My eyes, at least, went straight to Kardashian’s thong, which was pulled up above her skirt to show off a Gucci logo. As People reports, the thong looks to be from Gucci’s 1997 Spring collection. I mean, I love vintage fashion but I’m going to need some convincing before trying vintage underwear.

"@kkwbeauty Contour Singles Available NOW kkwbeauty.com," posted Kardashian. If you look closely, you can see that she’s in fact holding a contour palette, but you have to really look. The focal point of the photo is truly her Gucci logo thong peeking above her neon skirt.

You can see a photo of Kardashian’s thong going down the runway in 1996 here. Fashion collections are shown before their intended season, so even though it’s from Gucci’s 1997 collection, it actually went down the runway in 1996. Additionally, designers often create their garments up to a year ahead of time, meaning that the thong could have been produced in the year 1995, making it possibly 23 years old!

To put this into perspective, Kardashian is 37 years old. She was born in 1980, a full 15-16 years before that thong came to be. The underwear is even older than Kardashian’s youngest sibling, Kylie Jenner! Jenner was born in August of 1997, almost a full year after the thong in question went down the runway. Perhaps Kardashian’s thong was produced after the show, maybe it’s that exact one, but either way, those are some old undies! 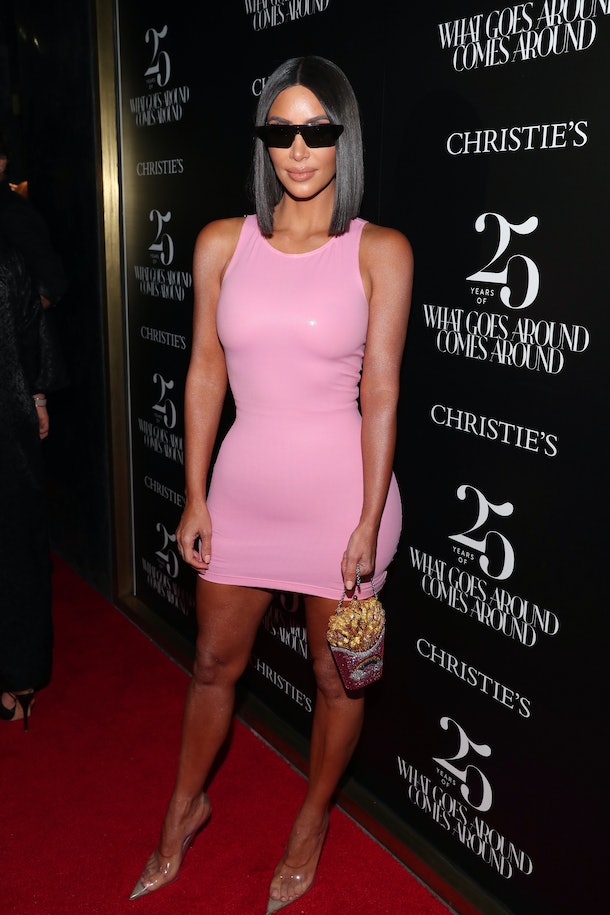 If you want to get Kardashian’s (almost) exact look, there are a couple of vintage Gucci thongs being sold on eBay. This GUCCI by TOM FORD 1997 G String Thong claims to be a true archival item and can be yours for the price of $1,799 (ebay.com). A similar option is this Gucci by Tom Ford Vintage ‘G’ Back Sheer Thong which has a slightly smaller back logo but is (slightly) more affordable at $579 (ebay.com). Just as I hope Kardashian did, be sure to wash any vintage underwear before you wear it, please and thank you.