Rosanna Davison and her husband Wes Quirke, who welcomed their first daughter Sophia last November via gestational surrogacy,  are "absolutely thrilled" to fall naturally pregnant, with their tots due in November this year. 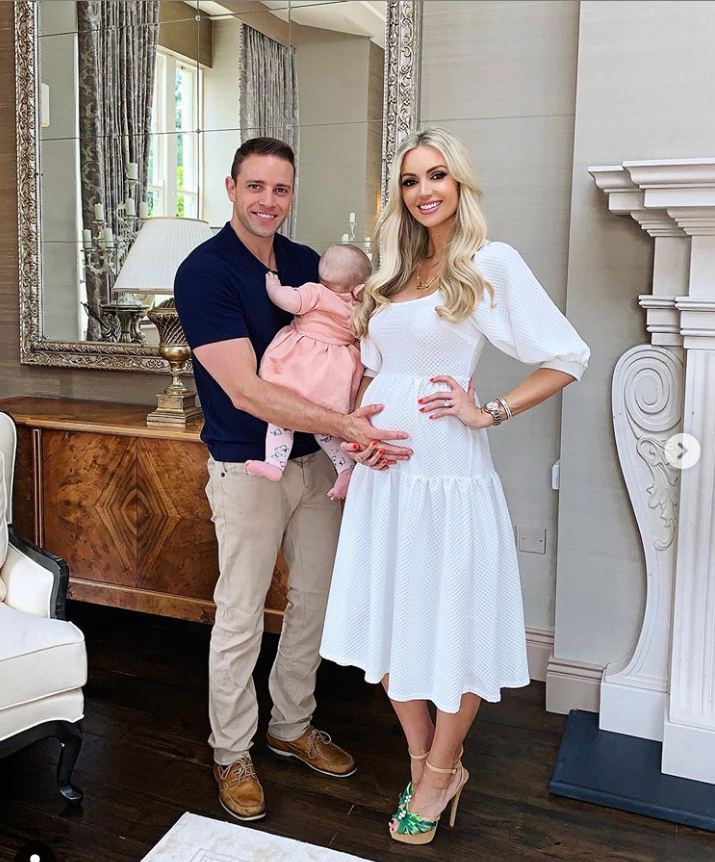 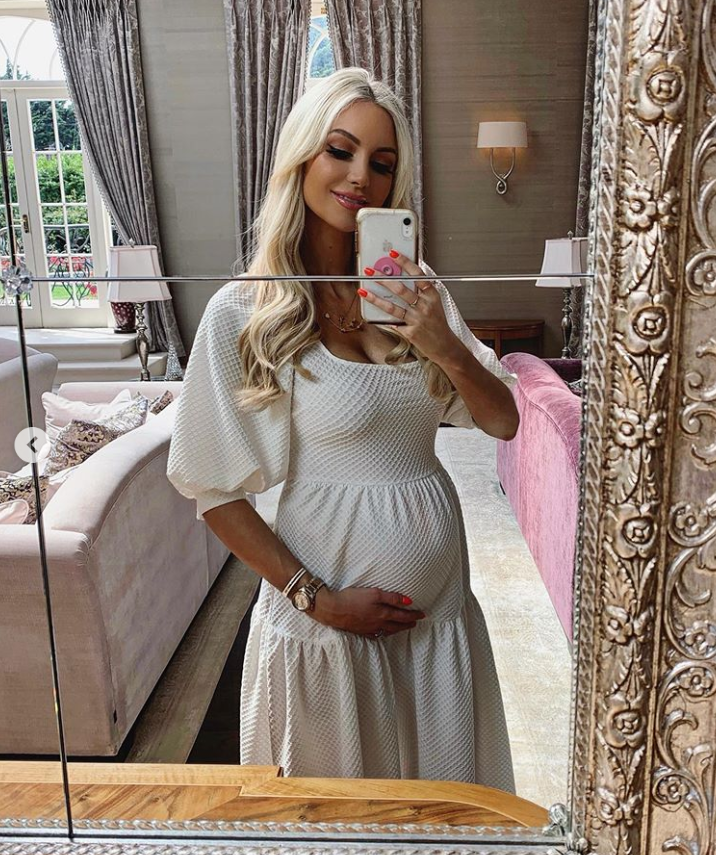 The former Miss World – who previously struggled to conceive naturally due to a rare medical condition – showed off her bump on Instagram.

The 36-year-old said: "We have some news! @Wesquirke and I are beyond overjoyed to announce that we’re expecting identical twin boys this November.

"We’re absolutely thrilled to complete our family and for our daughter Sophia to have two siblings so close in age to her."

Rosanna – who is halfway through her miracle pregnancy – said doctors couldn't explain it after she'd been told she would probably never carry her own child.

Rosanna continued: "As I’ve spoken openly about this year, we struggled with fourteen pregnancy losses over the past few years and a challenging fertility journey before finally welcoming Sophia last November by gestational surrogate.

"I was told that I would probably never be able to carry my own baby due to a suspected immune system dysfunction, which numerous different medical treatments failed to rectify.

"So for this to just happen naturally, and to have twins too by complete chance, is an absolute dream come true for us."

Rosanna found out that she was pregnant after the first month of Covid-19 lockdown.

She added: "My doctor can’t offer a medical explanation for why I have been able to sustain this pregnancy and it will probably always remain one of life’s mysteries.

"However, we found out I was pregnant after the first month of lockdown when I was far more physically relaxed than I’ve been in years and enjoying the slow pace of family life at home, despite the anxiety and sadness in the outside world.

"So perhaps that time out from the stress of busy everyday life made all the difference. 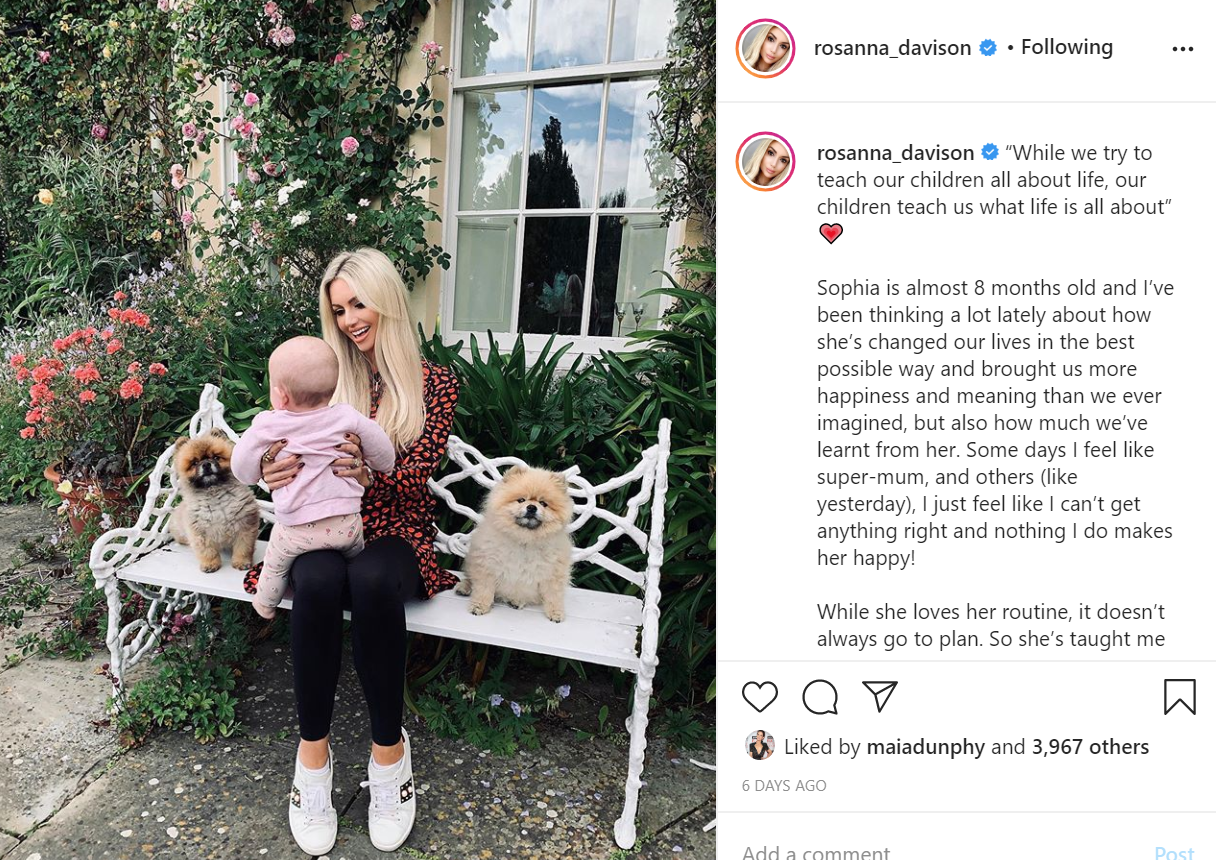 "We still can’t quite believe it ourselves and it’s taken a long time to properly process it and feel ready to share the news. As if 2020 hasn’t already been packed with enough surprises!"

She sent her love out to others who are still on their "baby journey" and she encouraged them to "never give up hope."

She concluded: "Fertility miracles may take some time, but they really can happen in the most unexpected and magical ways.

"As always, sending so much love to those of you still on your baby journey. Never give up hope."

And Amy Huberman wrote: "Oh my goodness this is just incredible news. Congratulations and sending love to you and your family xx."

This summer, I’ll be mostly hanging out beside the pool. The ball pool 🔴🟣🟢 #playcation

This summer, I’ll be mostly hanging out beside the pool. The ball pool 🔴🟣🟢 #playcation

Rosanna recently told how husband Wes "bottled up" his feelings when she suffered miscarriages – and admitted that fertility struggles are "just as tough for partners".

Suffering the loss of so many pregnancies took its toll on Rosanna, who admitted that she began to blame herself.

She told Sile Seoige on her Ready To Be Real podcast: "For the first year and a half or whatever, until we got the answers about my immune system, I was blaming myself.

"I was in this really negative cycle thinking 'Should I have done that gym session?' or 'Should I have had that cup of coffee?' or 'this is all my fault, I'm dysfunctional as a woman'.

"Not that I put everything I am into my ability to procreate by any means but I did feel that my role maybe as a woman and as a partner to Wes was to have a family with him.

"That did make me question my role as a woman. Thinking if I'd been born with the biological equipment I need to have a baby that doesn't work, it's not functioning then what am I? What am I to him?

"It's that awful guilt you feel towards your partner knowing how badly Wes wanted to become a dad."

Sophia, can you please stop growing so quickly – even for a few weeks! 😅

Sophia, can you please stop growing so quickly – even for a few weeks! 😅

'FOCUS ON FEMALE SIDE'

She added: "I think the issue as well of looking at the male side is a big one because we do focus so much on the female side of fertility, both from a medical perspective but also from an emotional perspective.

"But of course these were Wes' babies as well we were losing. He was very strong and supportive throughout, I couldn't have gotten through it without him, he was brilliant.

"But the focus was very much on how was I feeling, how was I doing but people didn't ask him enough about how he was doing.

"I think unfortunately he probably did bottle it up a little bit too much and I knew how desperate he was to have a baby and he was watching his friends have babies as well all around him.

"It's just as tough for the partner having to go through that and to be the one to support somebody going through miscarriages.

"To be the strong one really, to hold everything together but also feeling devastated.

"I think as well, as couple you're obviously going through it together but I think as individuals you need to process it yourselves in your own individual way and figure out how to get through that time."