Princess Beatrice has arrived at Windsor Castle wearing a navy lace garment and white headpiece.  The royal has turned up at St George’s Chapel ahead of the wedding of Lady Gabriella Windsor and Tom Kingston.  Beatrice arrived wearing a lace design to help celebrate the marriage.  The lace dress had a revealing top and full ruffled skirt.

Princess Beatrice stepped out for the wedding wearing a navy dress which had a cross design over the chest.

The dress nipped her in at the waist with a thick black belt and underneath a full skirt could be seen.

The skirt had a three tiers of ruffled lace fabric which cut off just above the knee.

A piece of sheer lace fabric could be seen poking out from underneath as it continued down to just above her ankle.

Underneath the crossed top, Beatrice had a thin floral lace design which continued half way down her arm. 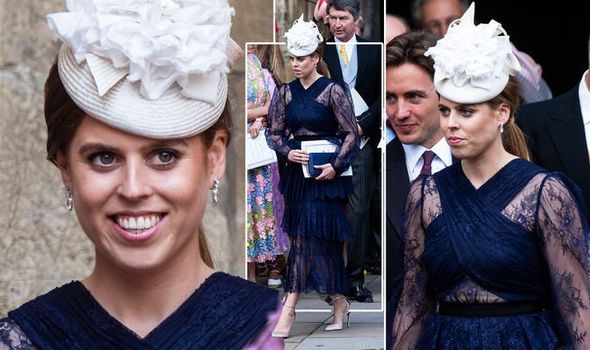 The sheer design showed of a glimpse of the royals stomach and she carried a matching navy clutch bag.

Princess Beatrice dressed up the outfit with a simple gold bracelet and a pair of pearl earrings.

She opted for a pair of nude strappy stiletto heels as she arrived with her boyfriend, Edoardo Mapelli Mozzi.

The royal wore a white hat which had white cap with feather detailing.

She wore her hair pulled back into a low ponytail showing off the full design of the dress. 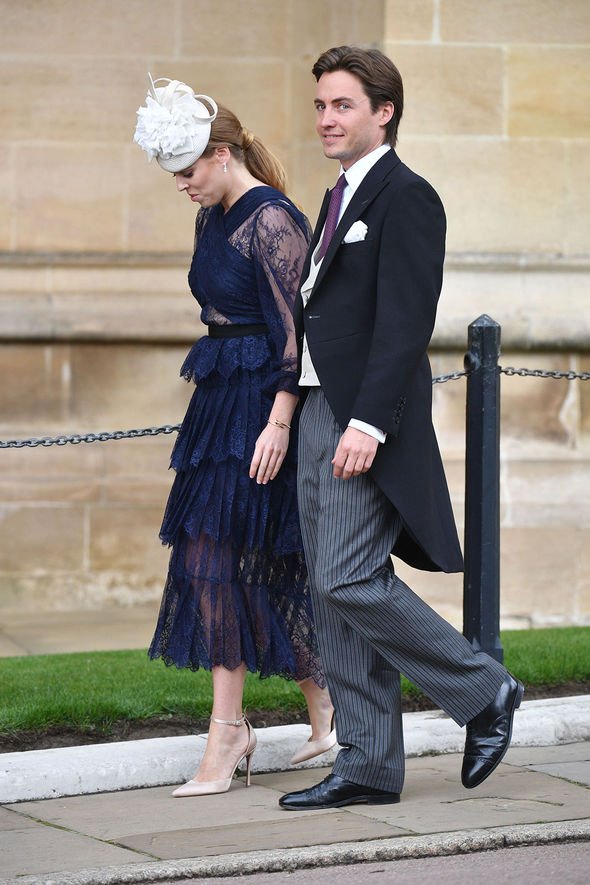 Guests have been arriving at the wedding in their best outfits, including Carole Middleton and Sophie Winkleman.

Pippa Middleton also arrived in a stunning blue floral dress with a matching headpiece and shoes.

Who is Lady Gabriella Windsor?

She is the daughter of Prince and Princess Michael of Kent and is 52nd in line to the British throne.

Her father, Prince Michael, is the first cousin of Queen Elizabeth II.

Gabriella’s mother is Baroness Marie Christine von Reibnitz, who is of Greek an German descent.

The royal studied Comparative Literature at Brown University in Providence, Rhode Island, graduating in May 2004.

Now she is a director on the board of numerous companies including the Branding Latin America, the Playing for Change Foundation and Toucan Ventures. Additionally she writes as a freelance journalist for The London Magazine.

Previously the royal dated British journalist Aatish Taseer, who she met while studying in the USA.

He went on to work as a writer, and is a freelance journalist who has written across a number of publications including Time and the New York Times.

He wrote a controversial piece about Lady Gabriella and her parents for Vanity Fair.

The royal and Aatish were together for three years in the early 2000s.

Gabriella married her partner financier Thomas Kingston on 18 May 2019 at St George’s Chapel in Windsor. The pair because engaged in on the Isle of Sark in August 2018.

When the engagement was announced, the palace released an official statement which read: “The wedding of Lady Gabriella Windsor and Mr Thomas Kingston will take place at St George’s Chapel, Windsor Castle on Saturday May 18 2019.”