FLORENCE, Italy — Art is a gamble at longevity beyond the artist’s earthly years — yet every artwork also has vulnerabilities and its own uncertain life span.

In Florence, which arguably has the world’s largest concentration of Renaissance masterpieces, art restoration is a civic virtue. The laboratories of the Uffizi Gallery and the Opificio delle Pietre Dure, Italy’s most distinguished institutions for restoration and scientific analysis, prolong these artworks with a combination of centuries-old skills and state-of-the-art technology, administered by their ranks of assiduously trained conservators. 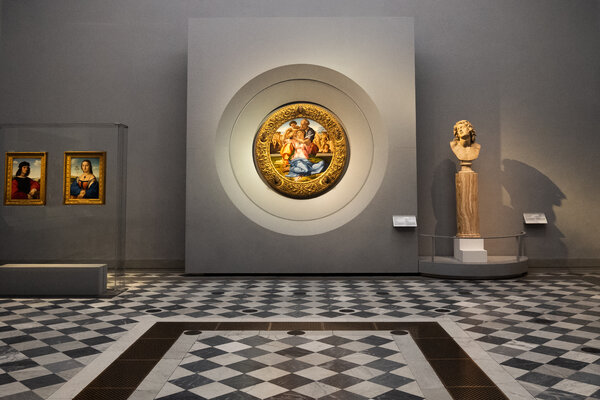 In the last century, the Uffizi’s collection has faced a succession of calamities. During World War II, many of the artworks were hidden in the damp cellars of castles and villas throughout the countryside. In 1966, the Arno river overflowed its banks, submerging a floor of the riverfront Uffizi where art was stored. A car bomb placed by the Mafia exploded near the museum in 1993, damaging a quarter of its collection. And, throughout, time continued its own unrelenting assault. Half a millennium after their creation, these fragile, sublime remnants of the past have survived, thanks to luck and the talent of conservators.

“They’re simply objects made of wood, gesso, paint and varnish,” said Cecilia Frosinini, the art historian who heads restoration at the Opificio and a professional who reacts more impassively to the artworks than the average viewer. A journalist, she recalled, burst into tears at seeing some of the museum’s precious works left sitting on easels and lying on workbenches in the Opificio’s sprawling main laboratory. “I’m almost ashamed to say I feel no special emotions for the pieces, but a conservator has to work like a doctor, without any bias for who the patient is.”

In March Ms. Frosinini showed me round the Opificio, which primarily works with the Uffizi but also consults with other institutions, and has its own academic program for graduate level study. There were carts filled with old-fashioned sable paintbrushes and brown glass apothecary jars of burnt sienna pigment, white lead and beeswax. There also were ranks of contemporary tools adopted from the fields of optics, physics and dentistry: a 32-color band infrared spectrometer, a fluorescent X-ray system, a portable detector of organic materials, lasers and microscopes.

Technology has revolutionized how conservators operate, allowing them as scientific sleuths to examine the original layers of a work and its materials, and to understand what was added or altered by previous restorers.

Just in recent years the Opificio has discovered the many false starts sketched by a doubtful young Botticelli before he applied his paints to the “Sant’Ambrogio Altarpiece.” A five-year rehabilitation of Leonardo da Vinci’s muddied “Adoration of the Magi” revealed a painting teeming with 90 distinct figures and more than 30 animals.

And Raphael’s “Leo X” proved to be a much different portrait underneath its clumsy 19th-century restoration, which had smoothed over the Medici pope’s jowls and the heavy five o’clock shadows on all three faces in the painting with the vigor of a Photoshop editor. Infrared inspection exposed Raphael’s charcoal preparations for this unorthodox portrayal of the most powerful man in Christendom; simple solvents eliminated the previous restorers’ work and uncovered what Ms. Frosinini described as a rich “symphony of reds” in the papal garments.

“Raphael is viewed as a sweetheart artist with his little cherubs,” she said. “And there were so many things hidden under the retouchings that probably didn’t jibe with the restorers’ idea of Raphael.”

Early this year the painting was the star of a landmark exhibition in Rome marking the 500th birthday of Raphael — a show almost immediately interrupted by Italy’s nationwide lockdown in the spring, and allowing only half the number of daily visitors when it reopened. Then in October, the painting returned to the Uffizi for an exhibition to celebrate its three-year restoration, scheduled to run until Jan. 31 in the museum’s Palazzo Pitti but now closed as part of Italy’s new anti-Covid measures.

The pandemic has not only affected exhibitions, but also the work of restoration itself: The Opificio closed during the three-month lockdown, and its 109 employees now spend only half of their work hours on-site.

As the first British retrospective of Artemisia Gentileschi, the rare female luminary of 17th-century Florence, opened at the National Gallery in London in early October, her famed “St. Catherine of Alexandria” was still undergoing the slow process of restoration in Florence. (Last year the Opificio determined through ultraviolet, infrared and X-ray inspection that the artist had based the saint’s image on her own countenance.)

The Opificio lab was founded in 1932 by the renowned Florentine art scholar Ugo Procacci, at a time when restoration began to shift from artistic guesswork to scientific inquiry. When its original location on the Uffizi’s ground floor was engulfed by the 1966 floods, the lab relocated to the 16th-century Fortezza da Basso, to a space to large enough to accommodate the international restoration teams that arrived to salvage Florence’s many waterlogged artworks.

Maurizio Michelozzi, who graduated from the Opificio’s school with a specialization in paper and parchment conservation, returned to Florence, his hometown, in 2019 after years of working abroad to join the Uffizi restoration team, one of the museum’s two hires after a multiyear candidate search.

Mr. Michelozzi oversees the museum’s collection of more than 180,000 drawings — among the most fragile artworks to preserve — in the Gabinetto dei Disegni e delle Stampe, the Uffizi’s archive where its works on paper are stored in rows and rows of wood-slatted cabinets.

After spying the fountain pen I was using to take notes and replacing it with a less risky pencil, Mr. Michelozzi brought out eight drawings by Raphael — fluid sketches in red and black chalks, composed on the Renaissance era’s typical paper pulped from cotton, hemp and linen rags. The drawings, damaged by overenthusiastic 19th-century restorers, were preparations for “Saint John the Baptist as a Boy” and other paintings — their white highlights restored by Mr. Michelozzi’s delicate application of peroxide to reverse the oxidation that had darkened them, and the furrowed paper flattened with the help of an ultrasonic humidity chamber.

“The act of restoring is a privilege,” Mr. Michelozzi said. “You’re able to study a work and the artist’s techniques firsthand. But every phase requires extremely slow progress and a lot of thought.” It was early spring, and he had just finished preparing the drawings for their restored debut at the Raphael show in Rome, after which they would be put away for five years, a customary repose to protect the works after so much exposure to light.

In another of the Uffizi’s labs, inside what once was a large potting shed in the Boboli Gardens, Flavia Puoti delicately applied an acetone gel to the varnish of the small shells and crab claws that composed a jaunty male figure in a piece of 17th-century shell art. Ms. Puoti, the second new hire at the Uffizi, specializes in organic and mixed materials, and she was the first of the now six-person restoration team whose skills matched the work.

Restoration often calls for such a distinct knowledge set — in fabric, frescoes, the wood used for painted religious panels and the like — that experts working in Florence outside the institutions’ teams are frequently called in for special projects. “Probably no other city in the world — not London, not New York, not Rome — has as many conservators as Florence,” said Eike Schmidt, the director of the Uffizi, speaking a few days before Italy’s lockdown began.

But then, Mr. Schmidt added, the rewards of the profession are also found in the city. “The Uffizi’s collection is so vast and rich that conservators here make important discoveries many times a year, like that of Artemisia’s ‘Saint Catherine’,” he said. “In other collections a discovery that significant might come along once in an entire career.”