Blair Archibald was designing menswear that was finding a growing popularity with a female clientele long before it was a "thing". 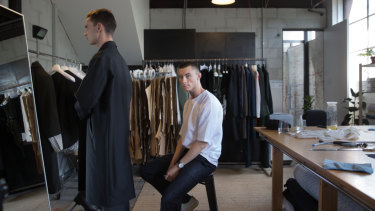 BT Emerging Designer Award winner Blair Archibald: ‘Unisex can conjure a one size fits all model and that’s not what I’m doing.’Credit:Simon Schluter

But the 30-year-old designer is at pains to point out that the whole unisex trend has been misinterpreted by some as "one size fits all".

"For me it’s always been about how you facilitate the conversation around what unisex means," he says. "It’s not always about producing something that men and women can wear. My philosophy is always driven by menswear [that is] accessible to a certain kind of woman.

"Unisex can conjure a one size fits all model and that’s not what I’m doing. I blur the lines in that it’s built off a men’s block but put on a female body – that’s where there’s the transformative element."

Archibald has had a big 12 months. He made his Mercedes-Benz Fashion Week Australia debut last year (he's choosing to not show this May), and was one of the finalists for the National Designer Award in March.

"I wanted to start [my brand] small and it accelerated faster than I could manage it, but it was all worth it for the exposure and pushing myself beyond what I thought I could achieve," he said.

On Thursday, he was named the winner of the BT Emerging Designer Award, a prize previously won by Albus Lumen, Kacey Devlin and Macgraw.

Archibald wins $10,000 cash, international travel and other prizes totalling $100,000, but it is the mentoring opportunities to grow his retail presence that have him most excited.

"What it offers is something I couldnt obtain by myself with my own contacts and networks. [Competing in awards] shows you are active in the industry. Why wouldn’t you want to take advantage of that? There is always talk that there isn’t support for local designers but there clearly is."

His decision to sit out this year's fashion week was in part driven by the cost of staging a show, although he still values his experience last year.

"If I am going to do it again I want to meet the same standard as I did for my first show. I’d rather not show than do a follow-up that’s half-assed."

Archibald said Australian consumers need to "have more faith in local designers from a retail perspective".

"There’s so much focus on international brands, to show we are up to date. If there is more attention put on Australian brands and what they are doing we as a nation would have a much stronger design philosphy because we are really invested in the brands that represent what we stand for as a country."

The other finalists in the BT award were A.BCH and Aaizel.

The reporter was a judge of the BT Emerging Designer Award.