But love 'em or hate 'em (and it's usually the latter) we're stuck with them. 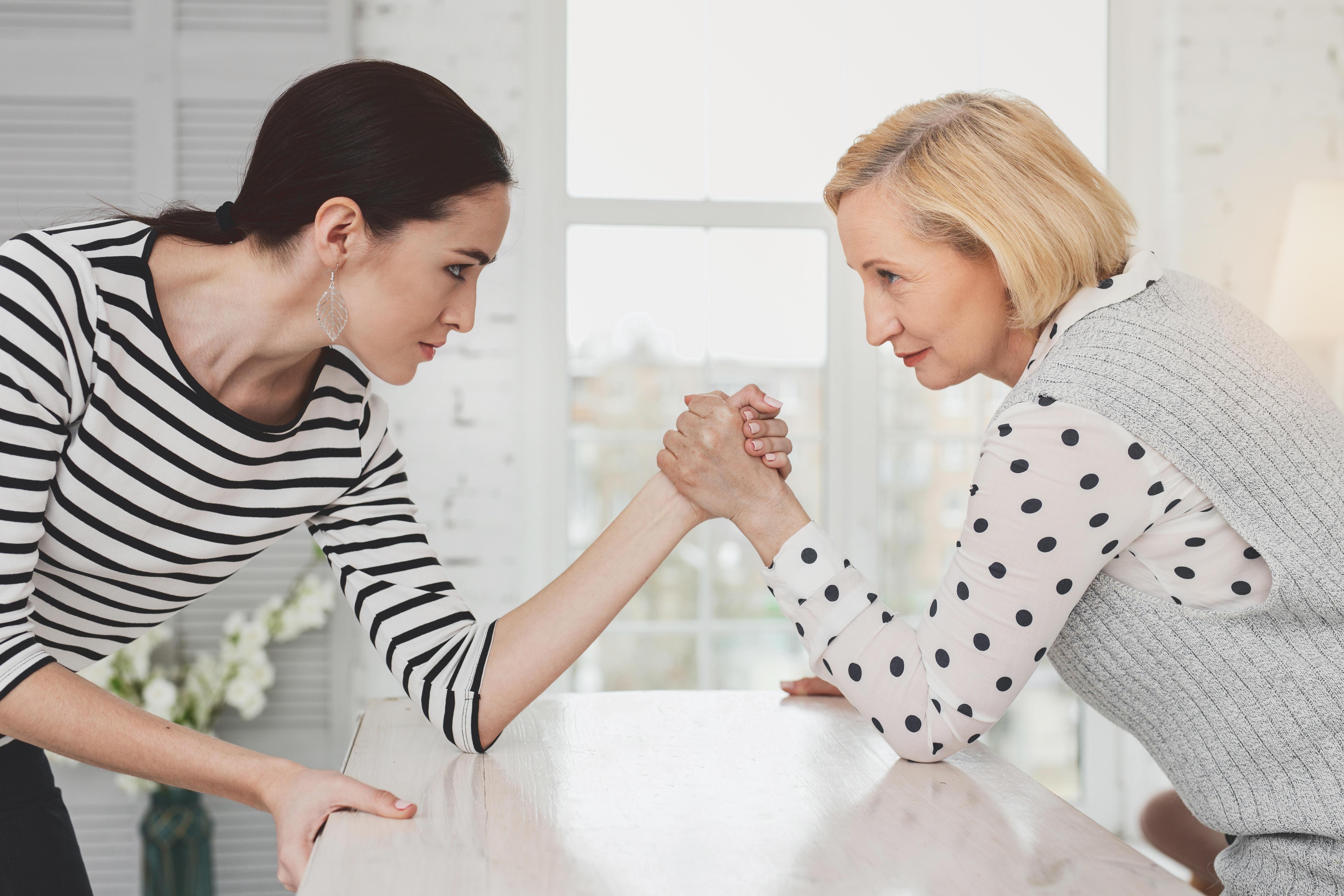 So we may as well laugh about it, right?

And if not laugh about it, then share the cattiest things they've ever said to Mumsnet – like a group of women have done.

From the mum-in-law who asked for a family photo at her daughter-in-law's wedding – without the bride –  to the one who received a beautifully wrapped box of cleaning supplies for Christmas, it makes us glad we've got the ones we have.

Here are some of our favourite remarks: 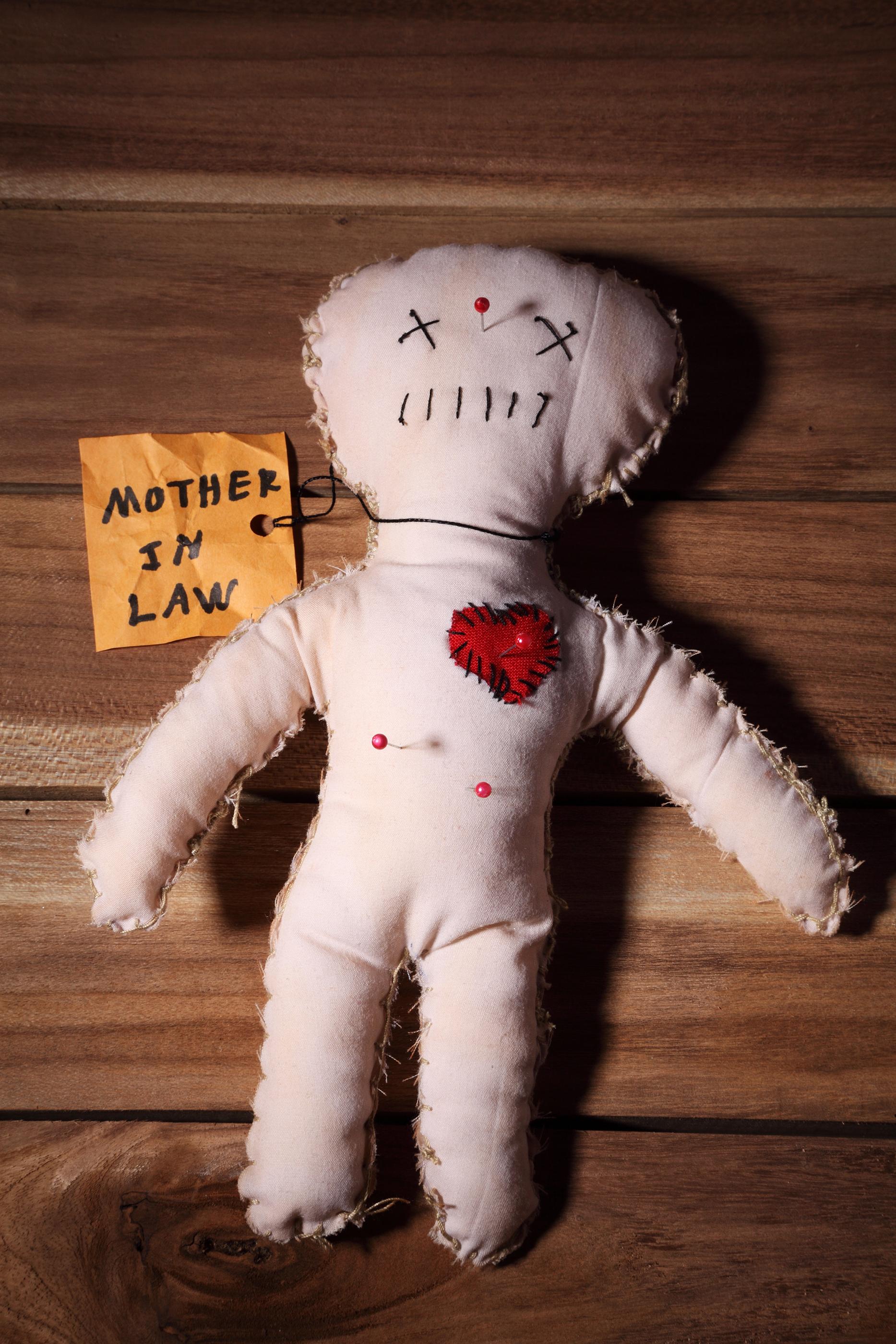 One woman revealed her mum-in-law – upon announcing her engagement to her son – showed her disdain.

She said:  "I was glad you didn't put it in the paper in case it doesn't work out."

Another woman revealed: "Joining families can be tricky. With my mil (mother-in-law) I mentioned a friend she hadn't heard me talk about before… 'Oh I thought you only had one friend!'"

Another told how she was watching Girls Aloud on television with her mother-in-law, when the older woman turned to her and said: "Oh to be young, thin and beautiful like them. That would be nice but we can dream on."

The daughter-in-law then finished: "I was 19 at the time." 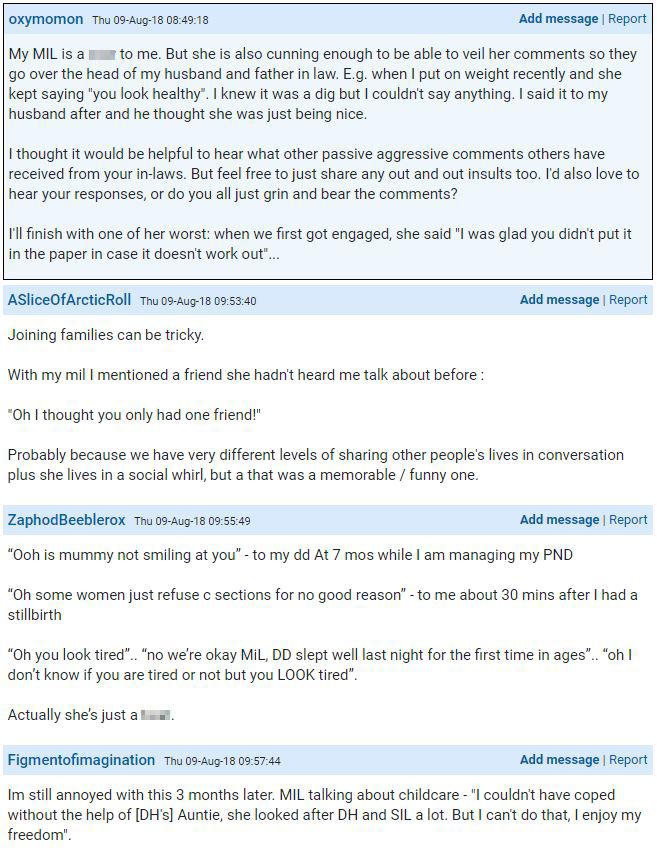 Another woman revealed how her mum-in-law was cheeky on her wedding day. She explained: "On my wedding day to her son, she asked me if I can get the photographer to do a family photo.

"So I come back with said photographer and she dismisses me.

"I'm standing there in my gown while she takes a family wedding photo with the whole wedding party minus the bride!"

She wasn't the only woman who'd had a naughty mum-in-law expose herself on her wedding day.

"A few minutes before our wedding ceremony [my mum-in-law] said 'I want you to know I told my son there's still time to cancel this whole thing'," revealed one woman. 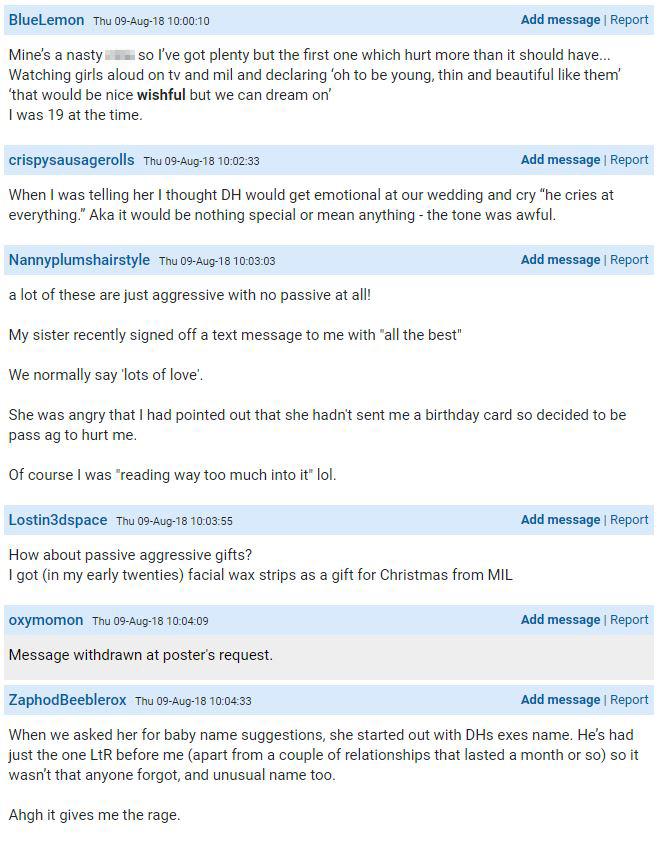 Another mum recalled one memorable Christmas.

"Christmas Day at the in-laws, my present is a big box that has been beautifully wrapped," she said. "I open it and it’s just a cardboard box full of cleaning supplies."

And one woman's weight was the subject of Christmas misery.

She said: "On Xmas [my MIL] bought me some size six PJs ‘to slim into’.

"I was a size 10. I had to explain to DH I would only fit into a six if I cut my hip bones and breasts off.

Baby names also featured with women revealing other things their mother-in-laws had said.

One shared: "When we asked her for baby name suggestions, [my] mother-in-law started out with DHs [darling husband's] ex's name.

In previous Mumsnet news a woman was torn after finding out her friend who has three kids is gay… so should she make him tell his wife?

Need more Mumsnet problem solving? What would you tell this woman with a relative who quit their job and now wants to borrow £5k from them?

This mum wanted advice about getting pre-childbirth fake tan and eyelashes.

And the mums saw red when one user asked if only CHAVS put their babies in headbands.