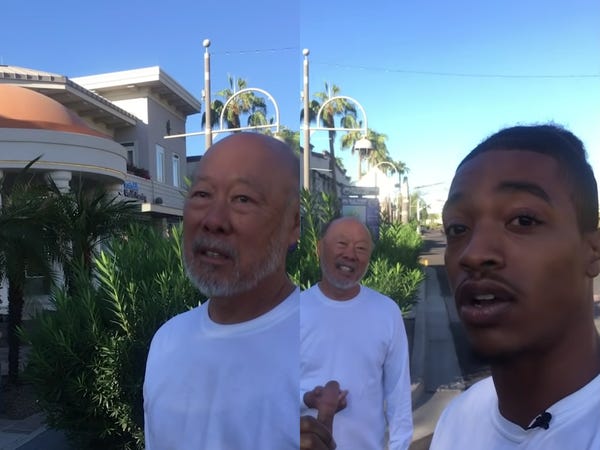 A Scottsdale, AZ man was arrested after a viral video from YouTuber Andre Abram, known as LILAJDRE on social media, showed him telling a Abram, a Black man, that he was filming in a "no [n-word] zone," according to The Arizona Republic.

Abram posted a video of the incident on his YouTube channel, which has approximately 95,600 subscribers, on October 23. In it, the man who was later identified as Paul Ng approaches Abram and says that he wanted to know what he was doing in the area. Abram asks why the man was taking pictures of him.

"Do you know a lot of white men are doing racist things in this world, sir?" Abram asks in the video.

After receiving calls from surrounding business owners, an officer questioned Ng about the incident later that night, according to a police report obtained by The Arizona Republic. Ng reportedly said that he was suspicious of Abram and his cameraman, Kane Tinkham because of their camera and Michigan license plates, and took photos of the two and texted them to local businesses.

On Saturday evening, the officer reportedly interviewed Ng again, with the police report saying that Ng said he thought that Abram was "mapping the place" and that he was "certain that the incident would be gone and forgotten within a week." The officer then arrested Ng and booked him on two misdemeanor counts of disorderly conduct.

On October 26, Russ Lyon Sotheby's International Realty posted a statement on its website announcing that it had terminated its relationship with Ng, who was an "inactive independent contractor," and that it condemned his behavior. The statement also said that the company had notified the Arizona Department of Real Estate of Ng's behavior and recommended that his license be revoked. It also says that Ng had not sold a home with the company for two years, and that any commissions that Russ Lyon Sotheby's found prior to that point would be donated to local charities.

Ng did not immediately respond to Insider for comment.

A local business was implicated in the conflict, but is not associated with Ng

In Abram's original video, posted onto YouTube, he films Ng blowing leaves outside of the store River Trading Post, saying that it is Ng's establishment. River Trading Post has since posted on social media that it has no affiliation with Ng and that he does not own the store.

The Daily Dot reported that ratings of the store, which sells Native American art, had dropped to 1.5 stars, with numerous recent reviews addressing the viral incident. Yelp now displays a "Public Attention Alert" on the store's page, disabling the ability to post as it investigates given "increased public attention resulting in an influx of people posting their views to this page."

River Trading Post said in a Facebook post and on Instagram that it had no affiliation with Ng. Kathi Ouelett, managing director of the store, told The Arizona Republic that she condemned Ng's comments. She also that the store had received a number of calls and social media posts targeting the business and that she had eventually changed the voicemail message to explain that the business wasn't associated with Ng.

Local news station 12 News spoke with Ng, who reportedly said that he shouldn't have said what he said in the confrontation.

Are Aaron Rodgers and Shailene Woodley the Same Religion?