Lord Sugar is no stranger to riling Twitter-goers with his controversial comments, but his previous run-ins apparently haven’t deterred him from making another misstep.

Yes, the original Apprentice big-boss and business man has angered followers again – this time with a “sexist” tweet about a shop assistant in Croatia.

“[email protected] went into a shop in Croatia to buy a jumper. After 20 mins my wife said what the hell is he doing in there, he has been ages,” he wrote alongside a photo of the woman. 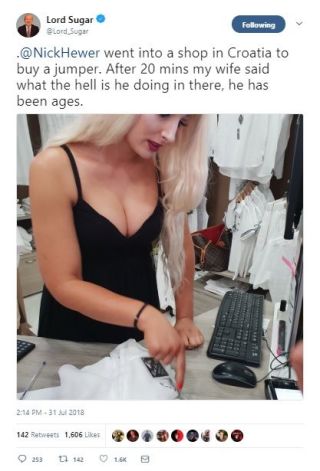 We see what you did there, Shugs.

Followers quickly called Lord Sugar out for his suggestive tweet, arguing that he was “objectifying” the shop assistant. “As a Lord of the House and former business tsar why are you objectifying women in this ‘joke’?” one asked.

“I get that it’s a joke but you’re position makes [you] a role model, whether you like it or not,” another added, while one person asked if Sugar had got “permission” to share the woman’s photo.

Digital Spy has reached out to Lord Sugar’s representative for comment.

This isn’t the first time Sugar has caused controversy with his online musings. Earlier this month, he came under fire for appearing to mock the surnames of the Croatian football team. 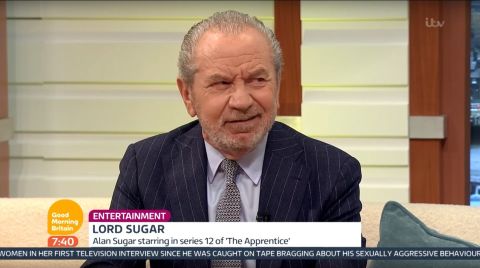 Back in June, Lord Sugar was forced to apologise after he compared the Senegal football team to “the guys from the beach in Marbella” last month.

At the time, the Apprentice star said his tweet had been an “attempt at humour” that had backfired, and insisted that he’d in “no way intended to cause offence”.