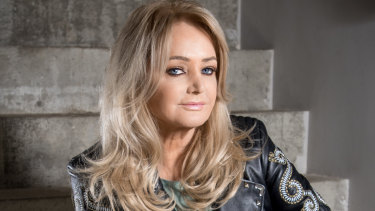 “Guys in bands have told me they’d have to smoke 100 cigarettes and scream to get a voice like mine.”Credit:Tina Korhonen

My father, Glyndwr, was a coal miner. He then worked as a fitter and turner. His younger days were tough, as he was in Dunkirk during World War II. He was a boxer as well – you'd never think it to look at him, though, as right up until his death, at 85, he was a beautiful man, and barely had any lines on his face.

He had the biggest blue eyes, which luckily I inherited. He also had a bit of temper sometimes, and I have that, too. But he was always telling jokes and would have us in stitches.

My mother, Elsie, had the most beautiful voice. People used to stand outside our house to hear her sing while she cleaned. She died aged 80 of Alzheimer's disease. We all think we have wonderful mums, but mine was the best.

My brother, Paul, came as a big surprise. Mum was 43 when she had him, which in 1961 was unheard of. He was a beautiful boy and got spoilt rotten. Music-wise, as he's 11 years younger than me, my tastes – Janis Joplin and Tina Turner – differ to his.

Paul is a rocker and has a raunchy voice. I bought him a Les Paul guitar when he was 13 and he loved it. He's still in Sunshine Cab Co, the covers band he started in his teens. He does Jon Bon Jovi better than Jon himself.

I was a really shy teenager but I've always loved make-up. I made my first pair of false eyelashes aged 11. I remember snipping off the ends of my hair, sticking them on Sellotape, and then rolling them around a pencil. I probably looked like Daisy the Cow.

My first crush was Paul McCartney. The first time I met him, I was in London doing the demo for [her 1978 hit single] It's a Heartache. It was surreal and I couldn't wait to tell my mother. I phoned and said, "Mam, you'll never guess who I just met." She said, "I don't know, but whoever it is, he is not better than [Tyler's husband] Robert." I said, "It's Paul McCartney, Mam."

I met Robert when I was 17. I was singing in a nightclub in Swansea [in southern Wales]. I saw him at the front of the stage and thought, "Phwoar!" It was love at first sight.

Robert's a European black-belt judo champion who competed in the 1972 Munich Olympics, but a gentler person you could not meet. We married in 1973. He travels on tour with me – I wouldn't do it otherwise. It doesn't make sense doing this if you're not with the person you love.

Men in the music business have never used me to sell sex. I don't depend on that, and couldn't anyway, as I don't consider myself sexy. I rely on my voice. It's all about the music.

My 1983 hit Total Eclipse of the Heart was nominated for two Grammys. When I moved to a new label, they asked who I wanted to work with, and I said, "Whoever wrote Bat out of Hell," because I love that record and knew I could sing those kinds of songs.

We approached Jim Steinman [who produced Meat Loaf's two Bat out of Hell albums] and he liked my voice. Three weeks after a second visit to New York, he'd finished that song, which he'd started writing years ago for Meat Loaf. I'm so lucky to have had that, and I never tire of singing it.

On my new album, Between the Earth and the Stars, I sing duets with three legendary men: Francis Rossi, Rod Stewart and Cliff Richard.

I met Cliff in 1976. We both have houses on the Algarve [in southern Portugal] and one night, when we were going out for dinner, he came to our house first for drinks. I played him songs for the new record, and when he heard Battle of the Sexes with Rod Stewart, he said, "What about us? We can sing together." We did this beautiful song, Taking Control. I can't wait to one day perform it live with Cliff.

People ask me if I've found it harder than a man to age in the music business, but I've never faced that kind of discrimination. Maybe that's because I have a rock voice. Guys in bands have told me they'd have to smoke 100 cigarettes and scream to get a voice like mine.

Bonnie Tyler's new album, Between the Earth and the Stars, is available now.

This article appears in Sunday Life magazine within the Sun-Herald and the Sunday Age on sale June 9.