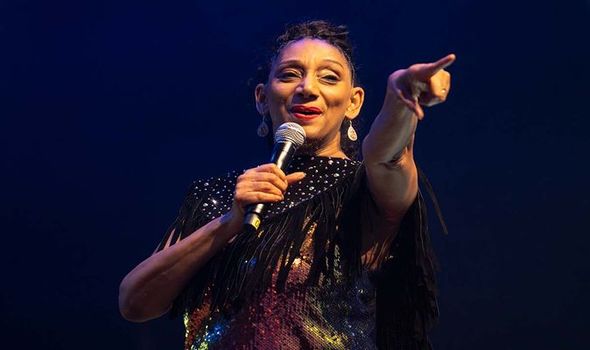 So how does it feel to know your music is still making people get up and boogie night after night, year after year, all over the world? Debbie Sledge, in London for a UK tour, tells the Daily Express: “It’s awesome. I feel like I’m blessed and I’ve been given a gift to express joy and it’s so contagious.

“When we’re singing it in front of a live audience, their joy is contagious, it feeds us, and when we’re having fun, the audience will have fun.”

Debbie, 67, is now the only sister standing from the original band, which also featured sisters Kim, Kathy and the late Joni. But don’t worry, her new line-up still includes two of her children and their cousin.

Having been part of the music business for more than 40 years, she says it’s wonderful to be able to celebrate Black History Month, and see how much things have improved for female performers, because it wasn’t always easy back in the day.

“We were not as free as we would have liked to have been,” she says.

“We had to breakthrough barriers, being black women, in an industry that was pretty much controlled by the other sex. My sisters y were great songwriters but they weren’t always listened to.

“Acknowledging black history is not something which should belong exclusively to one month of the year, it gives us a significant milestone to continually celebrate the true resilience, strength and overcoming character of the human spirit.”

Born into a showbiz family – their father Edwin Sledge was the first African-American dancer to star on Broadway – the sisters were taught to sing by their inspirational grandmother Viola Williams, an opera soprano.

The all-girl group was formed in 1971, and performed with James Brown at the famous Zaire74 festival in the run-up to George Foreman and Muhammad Ali’s Rumble in the Jungle boxing match.

But their worldwide breakthrough came when they teamed up with Chic’s Nile Rodgers and Bernard Edwards and recorded the album We Are Family.

Looking back, what was the best bit about those times? “Being with my sisters,” Debbie says, without hesitation. “Those are the times I remember most, the joy of that sister relationship. I love that unity. My sisters were so creative and Joni and Kathy especially were sticklers for presentation and choreography. I’m not the dancer – maybe everyone has noticed that!

“Joni had such an eye for fashion. I just put on what everyone else was wearing – they were almost dressing me – ‘Put this on, put that on’.”

Debbie is being modest, as today she looks chic and elegant, and much younger than her 67 years. She has incredible poise, something she probably owes to her mother Florez. “My mum used to make us walk with books on our heads, to be mindful of our posture,” she recalls. “In the band, we had a code, which I’m teaching my kids now. If one of us was slouching, we’d say, ‘Book it!’ to tell them to sit up.

“On another occasion we were performing and officials had to watch the show first. If there was something they disagreed with, we wouldn’t have been allowed to perform.

“We had very short dresses which we were concerned about, so one of the code words was, ‘thigh’, which meant, ‘You better pull that dress down’. We were sitting on these stools, and Kathy looked at me and whispered, ‘Thigh!'” Over the years, relationships between the sisters have had their ups and downs, and Kathy’s departure in 1989 to follow a solo career caused ongoing ructions and legal battles. The last time the four sisters were pictured together was 2003.

Sibling rivalries can be notoriously difficult to manage, so how did Debbie go about resolving conflicts with her sisters?

“Sometimes you are not able to resolve something no matter how much you look to do that,” says Debbie. “But what you can do is have a resolve that ‘I’m going to love you no matter how you are to me, I’m going to remain me loving you’. Sometimes I have to make choices to allow the other person space if that’s what they want.”

On Instagram, Debbie often posts throwback images of the group in their heyday, clearly feeling the loss of Joni, who died suddenly aged 60 in March 2017, immensely.

“She’s helping me to this day. The way she lived, the person she was, the strength she had, the brilliant talent that she was,” she says. “I find myself asking, ‘What would Joni do?’ She’s still with me, she’s still with us all. The zest for life she had was an inspiration.”

Over the years, the sisters have toured and performed with legendary stars like James Brown, Aretha Franklin and the Jackson 5. In the 1970s Debbie was on maternity leave while her sisters toured with the Jacksons, but rejoined the band for the last few shows.

“They were gentlemen. I didn’t get to know them as well as my sisters did, but they were always very polite,” she says. “That was a long tour. My sisters came back super skinny, they were working so hard.We performed with them recently and they are always gentlemen and always polite and kind – and busy. We know what that life is like, there’s no sitting still.

“Aretha Franklin was one of my heroines, and I had the opportunity to perform with Whitney Houston too. They were just phenomenal, gifted artists. They were always polite and kind, and there was a mutual respect. I don’t know why it’s mutual because I’m not on that level! But all I know is I admire these very strong women.”

Debbie adds: “James Brown was a very strong character too. I have to smile when I think about it because these are one-of-akind personalities, and I think that’s what needs to be encouraged today. Don’t copy someone, be yourself.”

As a pioneering girl band on the road, Sister Sledge were breaking down barriers as they went, and one of them was juggling motherhood and performing.

Debbie, who has six children, admits: “During the bulk of those demanding days, I was having children at the same time and was having to leave them. I took them with me up to a certain age, but then my husband put his foot down.

“But when I was home, I was fully home, and they didn’t notice too bad when I was gone. It was me that was torn, but I got through it. Actually, I’d be worn out at home and going on the road was a break. I could get a bubble bath without being disturbed.”

Forty years on, Debbie is still passionate about releasing music for a new generation of fans, and this month they are relaunching the band as Sister Sledge ft. Sledgendary.

They are keen to share a message of hope, after the difficult months of the pandemic – time which Debbie found hard, but which also gave her time to reflect.

“For a while, we were prevented from going out and doing the things we love, so we had to get creative. And now we’re looking for a time when we are going to be able to bust out free and do the things we want to do.There’s great hope for the future.”

“There’s no sign Debbie will be hanging her microphone up anytime soon. She’s clearly loving being back on stage again, and is embracing the craziness of life on the road. In the summer, the group hit the headines when they nearly didn’t make their slot at the Godiva Festival in Coventry when the tour bus broke down.

lntGCtd fslIowbcfitfig li d h ld ‘t “The electrics failed and we had to stop in the parking lot of the Holiday Inn, and run into do our make-up. There was no other choice but to call a local cab driver, and the first thing he wanted to do when he finally arrived was get gas! And then we realised he wouldn’t take a credit card, so we had to find an ATM.

“We had to warm up in the back of the cab, but we made it on time!”

Family values still come first in the Sledge clan, and now both generations are learning from each other as they tour together.

Debbie’s daughter Camille, who is in the band, says: “I’ve learned from watching my mom and my aunts push for what they believed in. They’ve always done things that were outside the box. It’s so much fun to be able to dance with her and party. It feels like home. I’m proud to be part of the Sister Sledge legacy.”

For updates and information on upcoming shows, see sistersledge.com