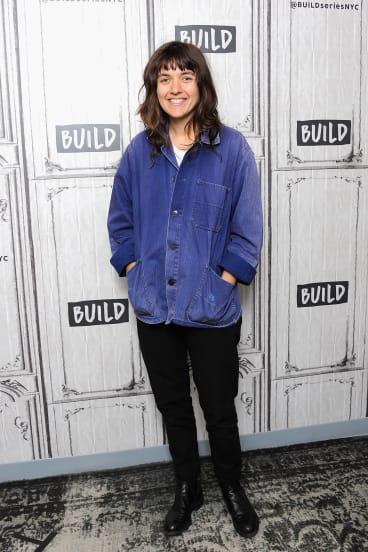 Courtney Barnett: “As a kid, I always got weirdly stereotypical versions of things.”

Each week, Benjamin Law asks public figures to discuss the subjects we're told to keep private by getting them to roll a die. The numbers they land on are the topics they're given.

This week, he talks to Courtney Barnett. Barnett, 31, is a Sydney-born, Melbourne-based, Grammy-nominated singer-songwriter. Her second album, Tell Me How You Really Feel, was released in May.

Oh, six. Actually, I veer towards six, but I'm not a straight six, you know. My general rule is to take people as they come. [Laughs] It's about connection, and a lot of that is beyond sexuality, gender or whatever. I don't really care that much. But you know, I'd say I'm definitely – and severely – more in the queer area. [Laughs] I don't really stress about it that much.

Is this attitude different to when you were growing up?

As a kid, I always got weirdly stereotypical versions of things. Lesbians were apparently man-haters. There were silly stereotypes about feminists. It felt like, by joining either of those parties, you'd be outcast in some way. Then I started to gather my own knowledge, recognise my own feelings and make up my own mind.

How did you do that? What were the reference points?

Art, literature, reading other people's experiences and connecting with them. That was the first step. Then it was about finding like-minded people.

Was there anything you wish you knew about sex when you were younger that you do now?

That there is no solid answer or rule. I'd struggle and be like, "Oh, I'm a lesbian, but hang on, I'm attracted to this guy now." A lot of really intense emotions manifest from that rigid framework. Knowing that then would have alleviated a lot of pain.

What qualities do you find sexy in people?

Humour. And some level of self-assuredness. They're a good starting point.

Your 2013 breakout single, Avant Gardener, references a real anaphylactic attack you experienced while gardening. Did you know before that moment that you had potentially fatal allergies?

No, I didn't. That was one of my biggest near-death experiences. I had one other one when I was really young, when I got stuck under a boat …

Oh my god. How old were you and how did you get stuck under a boat?

It sounds a lot more dramatic than it was. I was mucking around with my brother and our friends. I was swimming under this blow-up dinghy, came up for air, but I came up too early. This rubber boat was stuck on top of me with people in it, and I just had this moment of not being able to move.

They are the two moments in my life of being like, "Oh! This is it! Catch you later!"

At what age did you have the anaphylactic attack?

What went through your mind at the time?

It was so dramatic but so comical. I didn't know what to do; I didn't know who to call. I was living in a share house, so my friend was in another room, but I almost didn't want to bother them. [Laughs] I remember texting Jen [Cloher, her partner], sending her photos of my skin rashing up, asking, "Should I go to hospital? Call a doctor? Or is that too dramatic?" I was looking at myself in the mirror, struggling to breathe. At the time I was a huge smoker, and I remember in that moment looking at myself in the mirror, like, "WHY DO YOU SMOKE?" I quit smoking after that. So it was kind of great. I've never had a cigarette since.

So, in a sense, your near-death experience actually extended your life expectancy.

How do you feel about the certainty of death?

I'm one of those people who has to check all the doors are locked because I think someone's going to break in and kill me. But that fear is about the process of dying, rather than what happens after. So far, I'm like, "Oh well! It'll be like a nice big sleep." Who knows what happens? I'll go back to the earth, something will go around in a circle or cycle, and it'll be fine.

What do you want done with your body?

I've registered for organ donation to science, which I think is good, useful and handy. I don't have it in writing yet – except for maybe now – but cremate me and put me in some body of water or forest, maybe near where I grew up. That's about as far as I've got.

Did you grow up religious?

No, not a religious family.

For non-religious people, other labels sometimes apply. Atheist. Agnostic. Spiritual. Do any apply to you?

I would maybe say, on some level, spiritual. I wouldn't say atheist. What's agnostic?

When you're not religious, but haven't discounted the idea there might be something beyond you.

See, I don't know if I'm that, either. I think I believe in humans and nature. [Laughs]

Tell us about your relationship with the natural world.

It's about those moments of clarity, and respecting the kind of world we're living on, and a guest on. When you're around nature, you understand we're so small in this much grander scheme, and all the worries we cling on to – all the tiny things we spend our time and energy wasting away on – are so insignificant. It's not pessimistic; it's just putting it into perspective.

To read more from Good Weekend magazine, visit our page at The Sydney Morning Herald or The Age.