Home » Music » Here's how Take That plan to celebrate 30th anniversary, according to Gary Barlow himself

Gary Barlow has revealed how Take That will be marking their 30th anniversary, and now we feel about 400 years old.

The band, currently made up of Barlow, Howard Donald and Mark Owen, first formed in 1990 as a five-piece with Jason Orange and current X Factor judge Robbie Williams – meaning they’ll turn 30 in 2020.

Take That will release three new songs for the occasion, as part of their Greatest Hits album, and have been in the studio working on them.

“Our Greatest hits album is now finished and mastered,” Barlow tweeted. “Every track has had a face lift. Some have been completely re recorded. 3 brand new songs.

“There’s guests and lots of interesting links between songs. What a journey #TT30.”

It was confirmed earlier this year that Take That would be releasing a Greatest Hits album and launching a world tour.

However, it’s not clear if ex-band members Robbie Williams and Jason Orange will be rejoining Take That any time soon. 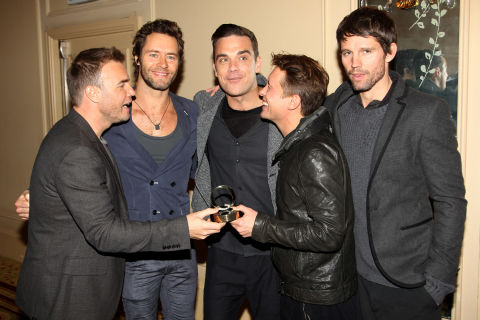 “We’re recreating some of the songs for the Greatest Hits,” Howard Donald previously said. “We’ve got three new songs that we’re going to put on the Greatest Hits. We want to go to all of the territories that we’ve never been to before, like South America.”

“We’ve reimagined some of the songs, but not all of them,” Gary added. “You’ve got to be careful with these things. If you take them too far, you’re destroying people’s memories.

“We’ve tried to be respectful to the music, but just putting a load of music on an album wasn’t enough for us.

“We wanted to just go back and have a look through it, and try to make it sound better.”