Home » Music » ‘I’m Chip, how nice of you to come’: Woodstock MC reflects on 50 years and brown acid

There was a lot going on for 30-year-old Edward 'Chip' Monck in 1969, the year man first set foot on the moon and nearly half a million music fans converged on a dairy farm.

A lighting designer since the late '50s, Monck quite literally lit up every rock star and band from The Rolling Stones to Jimi Hendrix as well as the premiere in 1974 of The Rocky Horror Show during his long career. However, it was on stage himself in '69 that Monck said the words synonymous with three days of peace and music at Woodstock, near White Lake in New York. 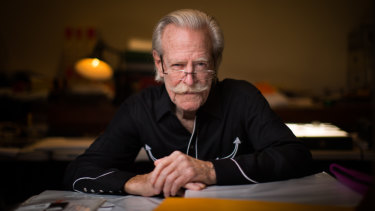 Chip Monck, who ran the lights on stage at Woodstock, was also the festival’s MC.Credit:Simon Schluter

"You may take it with however many grains of salt you wish [but] the brown acid that’s circulating around us is not specifically too good," Monck told the enormous Woodstock crowd on day two of the festival.

"It's suggested that you do stay away from that." 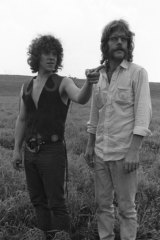 Michael Lang (left) and Chip Monck on site at Woodstock just prior to the event starting.Credit:Henry Diltz Photography

The brown acid reference, one of the more well-known lines about drugs to come out of the '60s, was a warning about the potentially unsettling effect of a batch of acid, or LSD, supposedly circulating at the festival. The hallucinogenic experience, involving visual and sensory distortions that comes with taking an acid 'trip' can be unpredictable, resulting in a good trip or bad trip.

Monck went on to say, at the time: "Of course, it's your own trip. So be my guest, but please be advised there is a warning on that one, OK?"

This week, when asked about the brown acid, Monck said: "I don't even know if it existed" and even if it did, he was working and "who has time" for getting high on acid when "I was on stage before and after every set," plus when he wasn't on stage, he was teaching others how to operate the lights that lit up the performances.

"Sebastian was (on acid), Carlos Santana was, everybody was on vacation. (Woodstock production co-ordinator) John Morris was amplifying his visibility, causing all sorts of crisis and I was trying to settle it all down."

Since the late '80s Monck has called Melbourne home, having married an Australian woman he met while working on Bette Middler's tour here in the late 1970s. He still works in lighting and often travels back and forth between Australia and the US. Looking back this week – prior to next week's 50th anniversary of Woodstock – the 80-year-old is far from misty-eyed about the festival, but says "there was all sorts of factors at Woodstock that came together, and miraculously, there was something or somebody looking over us."

Monck's 45-year-old daughter, who he had contact with for the first time about 15 years ago, has a son, both living in Los Angeles, and they're aware of Monck's famous moment on stage at Woodstock. "They know all about my time there but it's never had any effect on them, plus or minus, they’re more interested in the now," he said.

Born in Massachusetts in 1939, Monck's mother was "captured by musical theatre" and regularly took young Chip to stage performances in New York. As soon as he could, Chip began carving out his lighting career and was "doing my usual weekly rounds of the agencies" when he came across concert promoter Michael Lang, who was putting together the Woodstock line-up.

Originally hired by Lang and his partners to construct and operate the festival's lighting, it wasn't long before Monck and Lang found themselves on site at dairy farmer Max Yasgur's property, which hosted the crowd over August 15, 16 and 17.

"Michael tapped me on the shoulder on the Friday morning [day one of the festival] and said, 'By the way, we've neglected to hire an MC … and you're it', and that one of my first jobs was to move 100,000 people back a little bit from the front of the stage. So, I'm there saying, 'Good morning, I'm Chip. How nice of you to come, this is exciting, isn't it?' "

I wasn't there for my own success, I was there for them.

When it came time on day two to issue a very public warning about the brown acid, Monck says it was "only sensible" to give people in the enormous crowd – up to eight times larger than what they were originally planing for – information that may be useful.

"I just made some suggestions. If you need help, go to the medical tents. If anybody's having any difficulty, please, that's what our medical people are there for and they're qualified." He also said Yasgur was "a delightful person" and that "he truly meant it when he said 'God bless you' to everyone" during his few moments on stage.

Between opening act Richie Havens and Joan Baez, who was six months pregnant when she closed day one at 2am, there was nothing on stage that particularly stood out for Monck, who says "the rain was just another effect" over three days of music, mud and mayhem that captured worldwide attention. 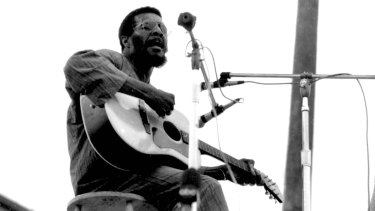 "We managed to get through it quite well," he says, pausing before adding "John Sebastian was pretty good." Sebastian, who was not there to play, was attending the festival and played late in the afternoon of day two while organisers waited for scheduled performers to arrive.

Some of the big names to play later that day were the Grateful Dead, Creedence Clearwater Revival, Janis Joplin, Sly and the Family Stone and The Who. On day three it was Joe Cocker who opened proceedings, while Johnny Winter, Ten Years After and Jimi Hendrix were among the huge names that played well into the night and into the following, final morning.

"I was as green as you could possibly be," said Monck about his MC duties at perhaps the world's most famous music festival.

"The thing is, you focus on two, three or four people in the front row, you deal with them, watch their faces and build a relationship with the crowd.

"The funny thing is, they told me what they needed. I wasn't there for my own success, I was there for them."

Who is Nick Cordero’s wife Amanda Kloots-Larsen? – The Sun

Sailor Brinkley-Cook flaunts her toned figure in a white bikini