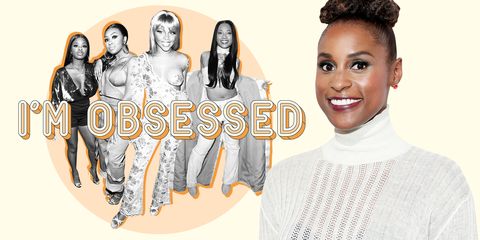 I’M OBSESSED is a new regular-ish series of essays from our favorite celebrities, influencers, and creatives about their silliest, cringeworthiest, or strangest pop culture obsessions.

Today we’re launching the series with Insecure star and creator Issa Rae on the music that inspires, energizes, and delights her: “nasty and filthy” hip hop.

The inspiration: a now-defunct YouTube series by Rae titled Ratchetpiece Theatre from back in her The Misadventures of Awkward Black Girl days—note: Rae actually no longer uses the term “ratchet,” more on that below—in which she broke down her favorite NSFW-worthy tracks in a faux-highbrow format. We asked Rae to share the jams she’s still vibing to and why she can’t give them up.

Ratchetpiece Theatre came about because when I was in college, hip hop was super nasty, super hardcore. And I remember taking all these feminism classes during the week and being like, god, hip hop just needs to do better, the misogyny in these lyrics… And then on weekends just being like, “Pop that pussy bitch, you so stupid!” And just the dichotomy, how we would all be so against it but love it on the dance floor. And so I had to justify my love for the music by analyzing it in an academic way.

And all those songs and artists are still on my playlist. Like Trina who has inspired my latest obsession: City Girls. They’re two baby Trinas. But I don’t use the word “ratchet” anymore—it’s evolved, and even in the series I was like, ugh I can’t even say the word, because people have made it something else.

“I had to justify my love for the music by analyzing it in an academic way.”

I don’t know what I’d call that music now—I have to think about that. I don’t want to call it mumbleback because that’s what people use to degrade those rappers. And I still bump to that music, I still try to learn the lyrics. Drug Hop? Trip hop? No, trip hop is a thing. I don’t know, something drug-related.

It feels like it’s beyond my generation, but I still love it. It’s definitely for the kids. Like, I’m just going to watch from a distance and enjoy it and let the kids have it, I guess. But, for sure, those songs are all still on my playlist.

Today, I’m listening to artists like Frank Ocean—he always makes me feel like, OK I’m centered, I want to feel creative, I need to focus. He is my go-to like. But if it’s a party, a lot of my friends, we went to school in the early-mid 2000 in the bay, so I’m playing lots of Cash Money, “Wipe Me Down,” Too Short…

“The influence of that genre of music that I grew up on—it’s just nasty and filthy but I love it.”

If I’m driving—[editor’s note: one of Issa’s side hustles on the third season of Insecure is driving for Lyft]—I’d obviously play some Drake because he’s said that he makes music to drive to, in the car at night. Ty Dolla $ign is great to bump to. I love Saweetie. Rico Nasty—you want music that’s either going to calm your nerves in traffic or get you hyped to be out. You know, that good music that where you don’t want to leave your car? Oh, and I also love Travis Scott’s album right now.

Shower music is essential, too. It’s the way I start my day. If I’m feeling moody, I might play slow jams from like Sade or Stevie Wonder. And then if I feel like I’m pumped about my day: any type of hood rat hip hop.

My music taste 100 percent influences the music on Insecure and Issa’s raps—going back to Lil’ Kim, to Foxy Brown, to even now, those raunchy female lyrics, aggressive tones. The influence of that genre of music that I grew up on—it’s just nasty and filthy but I love it.