Home » Music » Little Mix may be teasing their new single, and fans already love it

Little Mix might have just teased their next single and fans are already going wild for it.

In a clip posted to the girlband’s official Instagram, Jade Thirlwall, Perrie Edwards, Leigh-Anne Pinnock and Jesy Nelson are all seen sitting in the back of a car as they nod their heads along to the track.

The song sounds like another girl power anthem from the X Factor group, with the lyrics: “Hell yeah I am / I don’t need a man /If I’m loving you it’s ‘cos I can / I don’t want your cash/I put my own rock on my hand.”

Fans in the comments section were blown away by the feisty track, with one writing: “I have to scream,” and another declaring it “A BOP”.

One fan even went as far as to compare it to Destiny’s Child classic ‘Independent Women’, enthusiastically writing: “Before: I buy my own diamonds & I buy my own rings. Now: I don’t want your cash, I put my own rock on my hand, Destiny’s Child is quaking seriously LM5 coming to snatch wigs and I can’t wait.” 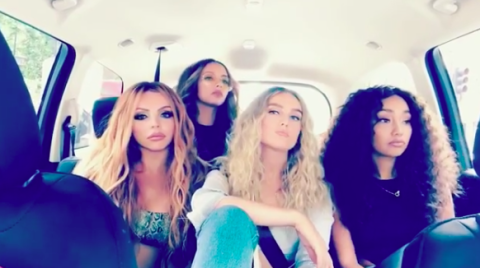 Back in March, the girls confirmed they were working on their fifth album, tweeting: “‘It’s official…#LM5 is actually in the works… We’re going to be patiently waiting for this one, it’s going to be an absolute dream!”

The band’s last album came in 2016 with the hugely successful Glory Days, which hit the number one spot in the UK, selling 90,000 copies in its first week of release.