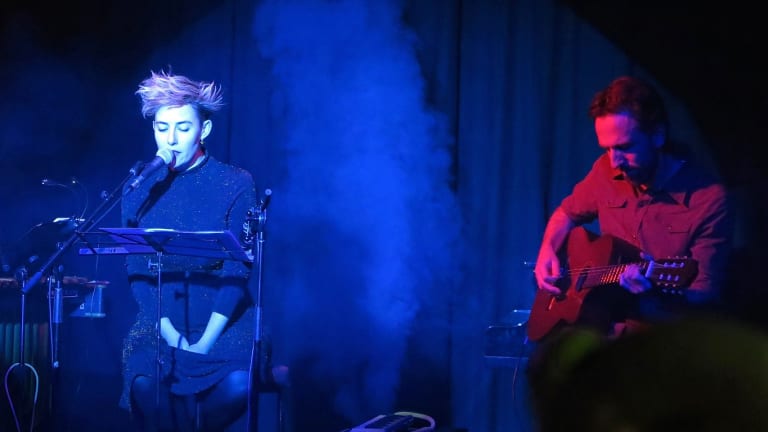 Out of the deluge of new music bursts an unexpected vision of beauty to rival Joseph Canteloube's Chants d'Auvergne. Part bucolic dream and part sonic rainbow (arching from the 13th century to now), this has guitarist Julian Curwin and soprano Jane Sheldon composing settings for assorted French, Spanish and English poetry of lost or unrequited love. The 14th century Chanson d'amour and La froidor, for instance, impale you on the anguish of love unrequited, made all the more poignant by the bell-like, boy-soprano purity and innocence of Sheldon's voice against Curwin's classical guitar. The title track and El Sol both have otherworldly wordless singing, the former deploying an exotic counter melody and ghostly electric guitar laced with viola (Shenton Gregory) and percussion (Jess Ciampa), who also deftly colour other pieces. Rimbaud's Ophelia, surely among the greatest pieces of Shakespeare-inspired poetry, now floats in musical pathos, and the one song in English, Unseen, Unknown, is by Shakespeare's contemporary Mary Wroth. The music, gently bathing in the prevailing medieval ethos without descending to pastiche, is performed with an artistic rigour worthy of Jordi Savall. I know no higher praise. JOHN SHAND

Loose Tooth's debut album is short but very, very sweet. With only one track exceeding four minutes, the Melbourne trio keeps things to the point over 11 jangly songs, showcasing a knack for sunny vocal harmonies, addictive basslines and their own take on the striped, sunlight sound made famous by predecessors like the Go-Betweens. From the first moments of the punchy opener Keep On, this debut is engaging and fun: it mixes fuzzy upbeat numbers with tunes like Asteroid, where bassist Luc Dawson takes the mic against a musical backdrop that recalls the Cure's best pop moments; Moonshine, which dials things back even further to create an incredibly textured mood; and Miss You, recalling one of Melbourne's finest, Dick Diver, with brassy undertones married to stunning harmonies and shimmering guitars. Comparisons are easy to make, but Loose Tooth is much more than an amalgamation of the influences they wear on their sleeve: they're an exceptionally tight unit with unique ideas, carried out with confidence. Transport yourself to the sticky floor of the Tote on a Friday night with this assured and infectious debut from one of Melbourne's most promising new acts. GISELLE AU-NHIEN NGUYEN

TO THE SUNSET (Cooking Vinyl)

It's 13 years and five albums down for modern Americana veteran Amanda Shires, who delivers perhaps her finest set yet in this lush, adventurous, intimate and assured album that plays to her vocal and lyrical strengths. Many may know Shires as the wife of alt-country legend Jason Isbell, but she was an accomplished artist long before they met, and rightly deserves her own spotlight. Parking Lot Pirouette is a slinking, sultry amble filled with nostalgia and romance, Shires' soaring, reverb-drenched vocals simply stunning. It doesn't take long for To the Sunset to reveal itself as a divine pop record, either: the light, bright Leave it Alone is full of breezy hooks over a programmed beat, while Break Out the Champagne and Swimmer are tasty slices of alt-country that boast the kind of deceptively catchy choruses that provide middle-of-the-night earworms. While the spaced-out, synth-swirling Mirror, Mirror doesn't quite deliver, the stomping, raucous rock'n'roll of Eve's Daughter certainly does. Recording in Nashville, the Texan wanted to bring more atmosphere to her accomplished song-writing. She (and producer Dave Cobb) manage just that, but with a deft enough touch to ensure that spotlight stays on Shires. BRONWYN THOMPSON

With each album Barney McAll's artistry currently seems to scale new heights. Certainly Zephyrix (Zephyr amalgamated with Phoenix) is his most ambitious composition to date: a suite for 15 players evoking the five birds of alchemy. The music's intent is both programmatic and philosophical, celebrating transformation, while soundtracking the soul's putative journey towards serenity. Black Crow, loosely representing release from the physical body, is a series of eerie hazes coagulating into sudden shafts of melody, through which runs a tinkling stream of McAll's piano. White Swan, the first encounter with dazzling ethereality, is (surprisingly) realised with a chunky ensemble groove and blinding trumpet and tenor solos. The transformational splendour of Peacock is evoked by violin over a feathery backdrop, before an exotic ensemble fans out into multiple solos. The self-sacrificial facet implicit in Pelican is initially invoked with a percussion-heavy section, and then translucent solo piano. The title track – conceptually a rope-in, but musically pivotal – precedes the final alchemical bird, Phoenix, the transcendence of the physical realised by the album's most haunting music transmuting into its most vigorous. JOHN SHAND

WHAT WE DID ON OUR SATURDAY (Matty Grooves/Planet)

Folkies don't make a lot of money. In 1976 the towering English folk-rock group Fairport Convention came up with a brilliant way to supplement their meagre income: they established their own festival in the tiny Oxfordshire village of Cropredy. It has been going ever since. In 2017, as they celebrated their 50th anniversary as a band, they performed 25 songs – mostly taken from their early years – with a line-up forged from various configurations of all living members, past and present. It's no accident that the people of genius in the band's early manifestations – guitarist Richard Thompson, vocalist Sandy Denny and fiddle player Dave Swarbrick – account for no fewer than 18 of the 25 songs, with classics like Now Be Thankful, Meet on the Ledge, Farewell, Farewell and Sloth still sounding remarkably fresh. They don't always get it right, however: the beautiful, wave-like, rolling sensuality of Leonard Cohen's Suzanne is given a juddering background, and Matty Groves, one of Sandy Denny's most moving performances, has a jolliness that sits uncomfortably with the lyrics' dark content. Still, this celebration of a remarkable band stands as a monument to their enduring greatness. BRUCE ELDER

They're touted as a supergroup featuring members of New Order and Devo, but buyer beware: please read full list of ingredients before ingesting. There's no Bernard Sumner or Mark Mothersbaugh here. If you're scratching your head trying to match up ShadowParty's membership with anyone in those two iconic groups, it's because they joined latter-day incarnations after the classic line-ups fractured. Their debut album sounds exactly like something made by four efficient musos hired as stand-ins to recreate widescreen '80s dance-pop. Celebrate is a shiny, shuddering thing that waves its hands in the air shrieking "Pick me! Pick me! Pick me for your next TV sports package of soccer balls hitting the back of the net!" They treat everything from House-inflected pop (Vowel Movement) to a T Rex moment (Truth) with maximum efficiency, minimum personality and po-faced lyrical declarations. New Order gets thoroughly picked over and reheated in the microwave, particularly on the jittery Reverse the Curse and Present Tense, which features guest vocalist Denise Johnson wailing the unfortunate line "This couldn't be more disastrous, why do we lie?" That's a harsh but fair assessment of this less-than-super outing. BARRY DIVOLA