It was with some trepidation that I took my seat at Margaret Court Arena; you never know what you’re going to get with Bob Dylan.

Just as the musical legend is known for his sonorous, growling, unmistakable voice he’s also got a reputation for erratic live performances. 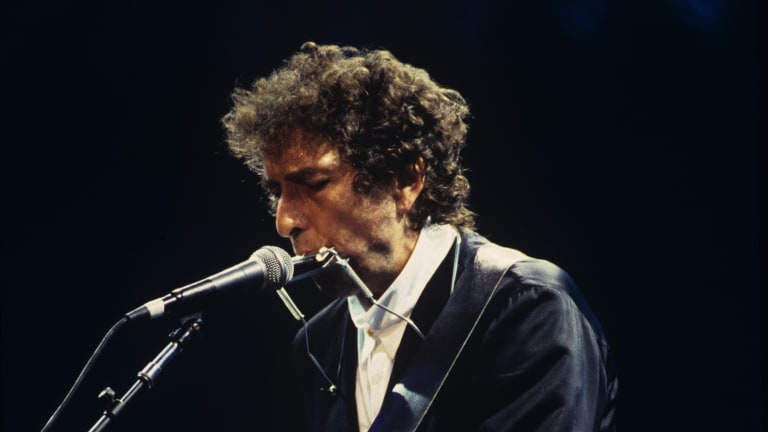 Bob Dylan is playing gigs around the country.

Dylan doesn’t play to the crowd. He’ll do what he wants.

Luckily for Melbourne, he wanted to turn it on for a Monday night for the first of his two local gigs.

The crowd here to see the 77-year-old edged, perhaps unsurprisingly, towards the older end of the spectrum, with a few local celebrities thrown in for good measure.

But while Dylan was diminutive in his white jacket and slightly thinning shock of dark brown hair, he maintained his energy right from the beginning to the end of his performance.

Standing before his black piano, he started with Things Have Changed, the song for which he won an Academy Award. He sang of "a worried man with a worried mind", with the trophy beside him on stage.

He didn’t say a single word to the crowd for the entire performance of just under two hours – not even "hello" or "goodbye".

His security team were similarly unfriendly, outlawing taking photos and videos on phones (a welcome development) but also admonishing anyone who dared to stand up to dance.

But while Dylan may not have charmed, he did perform song after song passionately, letting his poetic lyrics resonate.

Dylan has been playing roughly the same set list for most of the year so his talented five piece band were tight and polished, really seeming to enjoy themselves with the high-energy blues of Highway 61 Revisited.

The band switched instruments from keyboard to cello, violin and even ukulele, while Dylan stuck to his piano for the duration of the show, occasionally bringing out his harmonica to hark back to his folk roots.

He swapped genres and musical styles from song to song but that distinctive voice carried through.

Over time Dylan’s guttural snarl has become deeper and different but it still mesmerises in his classic Tangled Up In Blue which is one of his most frequently performed songs.

There may have been some in the crowd disappointed that Dylan’s most well known songs Like A Rolling Stone, Mr Tambourine Man and Blowin’ In the Wind didn’t feature.

But it’s hard to be churlish about the omissions of a man who has released 36 albums and has a back catalogue of songs to choose from stretching over more than 50 years.

I felt lucky to have experienced even a slice of Dylan's musical genius.