"As Gregor Samsa awoke one morning from uneasy dreams he found himself transformed in his bed into a gigantic insect."

The famous opening lines to The Metamorphosis have been a source of lively debate among academics ever since Franz Kafka's disturbing novella was first published in 1915. 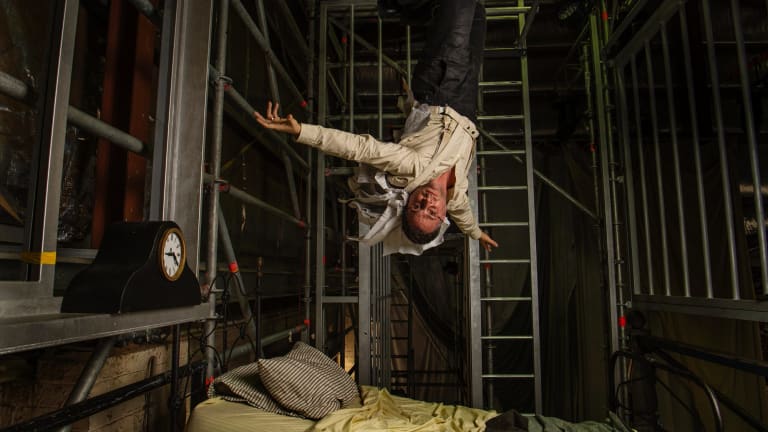 World turned upside down: Simon Lobelson in costume for his lead role in Metamorphosis.

Tama Matheson, director of Opera Australia's production of Metamorphosis, is just the latest in a long line of interpreters who have considered whether Kafka's bizarre story should be taken literally or as a metaphor.

"We puzzled and puzzled over the insect and what that means," he says. "We looked up academic tomes and Kafka's words and everybody has a different opinion. It's infinitely interpretable and it's infinitely ambiguous and I think that's the brilliance of it."

Samsa is a travelling salesman, beaten down by the drudgery of his work and the demands of an ungrateful family. The story centres around the (mostly cruel) treatment he receives from those around him after his unfortunate transformation.

In this production of Australian composer Brian Howard's opera, Matheson wants to "fuse" the symbolic and literal meanings of Samsa's mutation, outfitting baritone Simon Lobelson in an insect-shaped costume made of dusty paperwork from his character's dreary job.

"It's as though he has been encrusted with the demands of his work," says Matheson. "He's become nothing but an insect who crawls day by day from work to home. And his family treats him as an insect because they just want his money. They are sort of stomping on him all the time.

"Nobody notices him at work unless he is absent. And his family doesn't really care for him unless he can't got to work and earn the money. They think of him as nothing but crawling vermin."

In a radical departure, Opera Australia will stage the production in the scenery workshop at the company's Surry Hills' headquarters.

"The workshop is gritty," he says. "It's like a factory, which works with this period."

It's also a chance to bring in a different audience from the typical opera goers who flock to more conventional productions at the Joan Sutherland Theatre. Maybe even some first timers.

"It's so important to demystify opera and stop it being this untouchable thing that you go to if you are a cognoscente. It's perfectly approachable if you just approach it. It's just a story with music rather than some high-falutin' thing you can't touch unless you have the knowledge."