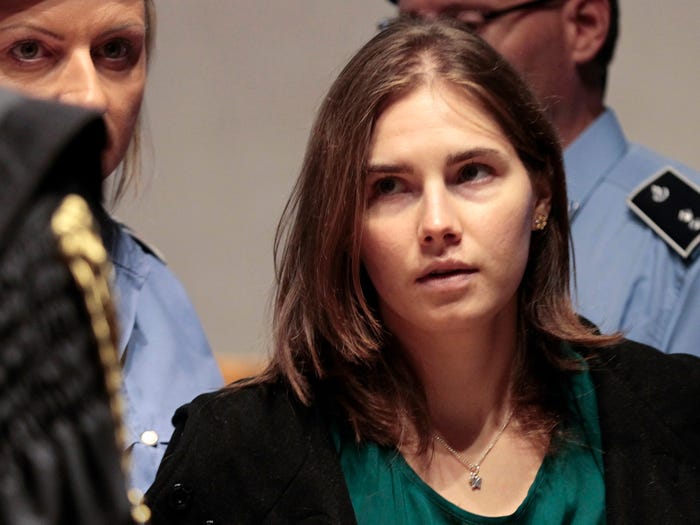 Amanda Knox has faced backlash for a dark, controversial joke she made on Wednesday morning. Knox tweeted that whoever wins the 2020 US election, former Vice President Biden or President Donald Trump, things could still be worse.

"Whatever happens, the next four years can't be as bad as that four-year study abroad I did in Italy, right?" Knox tweeted, which has racked up more than 20,000 retweets and likes.

Knox, 33, spent four years in a prison in Italy after being convicted of killing fellow exchange student Meredith Kercher in 2007. She was acquitted in 2011 by the Italian Supreme Court of Cassation, and fully exonerated in 2015. A man called Rudy Guede is now serving a 16 year sentence for the killing.

While Knox meant the tweet as a joke, it has caused a backlash with many people on Twitter. Some urged Knox to delete the tweet, calling it "insensitive" and "inappropriate" for making light of a woman's murder.

"Thoughts with Meredith's family after this deeply insensitive tweet," said one Twitter user. Another tweeted: "I think this was a very inappropriate and insensitive remark."

One user said the tweet was "tasteless" because "someone is dead."

"You were obviously acquitted, but d—," they said. "This is gross. Again, someone is dead."

Presenter and influencer Jessica Fyre replied to Knox by saying the tweet was an "excellent example of white privilege."

Activist Dr Shola Mos-Shogbamimu said she couldn't "imagine a Black woman getting away with this" and it was "white Privilege on Steroids."

Columnist Sali Hughes replied to the tweet with one word: "gross."

British commentator Piers Morgan retweeted Knox, adding, "I can think of a 21-year-old British girl named Meredith Kercher who had a far worse time than you in Italy."

Knox responded, saying she occasionally jokes about her "wrongful conviction."

"I'm allowed to joke about my own trauma," she said. "I didn't joke about the Kercher's. I didn't kill Meredith. Rudy Guede did, & you know it. Stop exploiting Meredith's name to victim blame me. You're pathetic."

Some people responded to Knox's tweet in support, saying they appreciated the dark humor.

"OMG, you just made me snort my vodka spritzer!" tweeted one follower. "You win twitter tonight."

Another said: "I love you. Thanks for helping everyone have some perspective."