Pink has postponed another Sydney show after spending a second night in hospital due to dehydration and a gastric virus.

Tuesday night's concert at Sydney's Qudos Bank Arena has been postponed, according to tour promoter Live Nation. The performance is the third show of the tour to be called off.

Last week, Live Nation told fans Pink's first Sydney show would not go ahead due to a chest infection. The American popstar is currently in Australia as part of her international Beautiful Trauma tour.

Pink was then admitted to St Vincents Hospital on Sunday night due to dehydration. After being treated and discharged, the singer was readmitted on Monday and diagnosed with a gastric virus.

Monday night's show was subsequently cancelled, with some fans finding out while making their way to the concert. The So What singer spent the night in hospital and is due to be reassessed by doctors today. 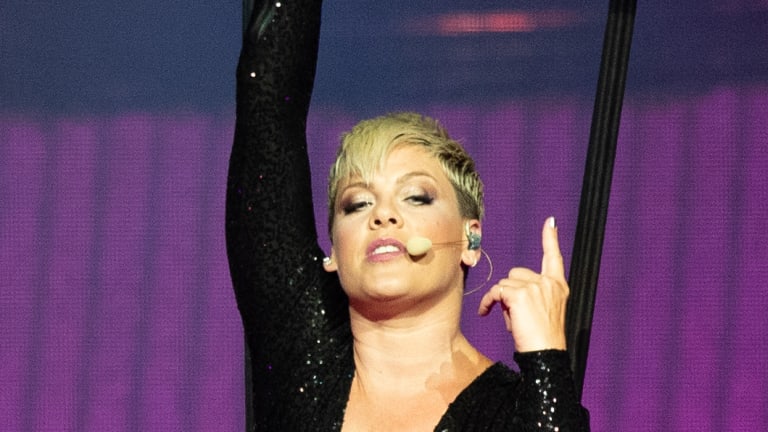 Live Nation says it will update fans when more information comes to hand. The tour promoter is scrambling to reschedule the string of postponed shows.

Pink turned to social media last week to vent her frustration at having to can the gigs.

"I appreciate your well wishes and understanding," she tweeted. "I'm sorry."

Over the weekend, she took to Instagram to slam News Corp for publishing a photograph of her lying on a beach in Byron Bay.

"What these paparazzi don't show you is two doctor visits in Byron on two consecutive days, antibiotics, steroids, Vick's, nose spray, throat spray, more steroids… a screaming baby in the middle of the night," she wrote.

"You can think whatever you want, it's your right, but I have never taken advantage of anyone in my entire life. I have never f—ed off while disrespecting hard-working people who spend money to come see me play. I have an impeccable record for not cancelling."

Pink is next due to perform in Sydney on Thursday.