Their mothers may be mourning the end of a two-year marriage but the preschool fans of Yellow Wiggle,  Emma Watkins, and Purple Wiggle, Lachy Gillespie will be oblivious when the Wiggles go on tour later this year.

The split of the popular performers came as a shock to most parents on the Wiggles Facebook fan site, where the couple posted news of their split on Friday. 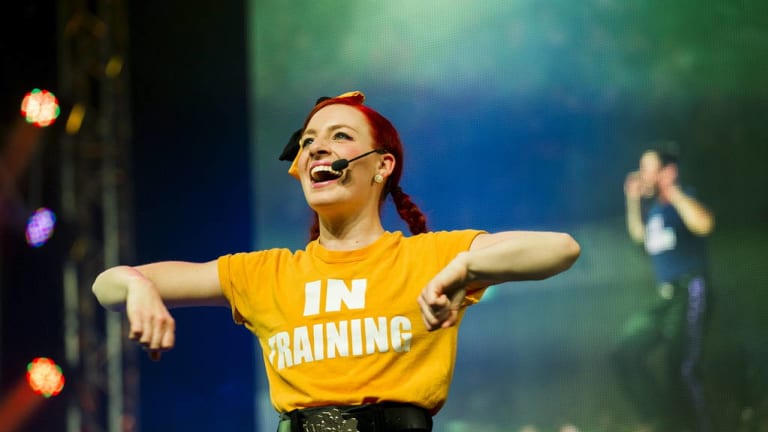 Baby news seemed to have been expected, not a sad announcement of them going separate ways.

But most parent fans seemed supportive of the couple's determination to maintain a professional relationship and professed to have not noticed any difference in the couple's stage manner while they were experiencing marital difficulties.

''For any married couple to work and live together is no easy task, but the general public and all the pressure of having a baby on top of that would have made it even worse,'' one fan commented.

There was also sympathy for Watkins' health issues with the debilitating condition of endometritis.

Children needed models of separated parents that get along, posted several parents: "You both are setting great examples for kids knowing you can both still get along," said one. ''Parents divorce all the time and this can give our little Wiggles hope it can be civil.''

In any event, most of their fan base didn't know or care for such adult matters, was the general consensus, and it mattered only that the two were continuing to work on stage together.

''I doubt the little people who make up their fan base will mind," said one of 13,000 people who logged comments. "I just hope they can navigate a successful professional relationship."

The couple will reunite on stage August 26 for the Emmy & Lachy Tour at St Marys Rugby League Club, then perform in September sold-out shows as the Wiggles in Darwin, and other dates in regional Queensland before heading to Canada.

The Wiggles will be back on the road travelling to Sydney, Perth, Canberra, Adelaide, Brisbane and Melbourne in November and December for the Wiggle Pop Big Show.

The couple, who met in 2010 on the Wiggles' Dorothy The Dinosaur Show, confirmed they had "navigating through a trial separation" during the past six months and we made the decision to split.

"Throughout that period, we have performed hundreds of shows together and that is always a continued source of joy for us both.

"We have embraced this as a very positive change in our relationship.

"Our incredible friendship has been strengthened throughout this time and what we have discovered is that, more than ever, first and foremost we love and adore performing as Emma and Lachy in The Wiggles and having the privilege of celebrating this happiness with extraordinary families around the world.

"We have chosen a different path to travel in our personal lives, but please know that we are stronger than ever and we can’t wait to see you at a show soon. We will not be commenting beyond this, and we thank you in advance for respecting our privacy."