Formed in 1963 – soon after Taylor left the fledgling Rolling Stones, where he was playing bass guitar prior to Bill Wyman joining the band – the Pretty Things went on to release a dozen studio albums, including their 1968 rock opera S.F. Sorrow. Originally an R'n'B band (they named themselves after the Willie Dixon song Pretty Thing, originally performed by Bo Didley), the Pretty Things are touring Australia next month for the last time. 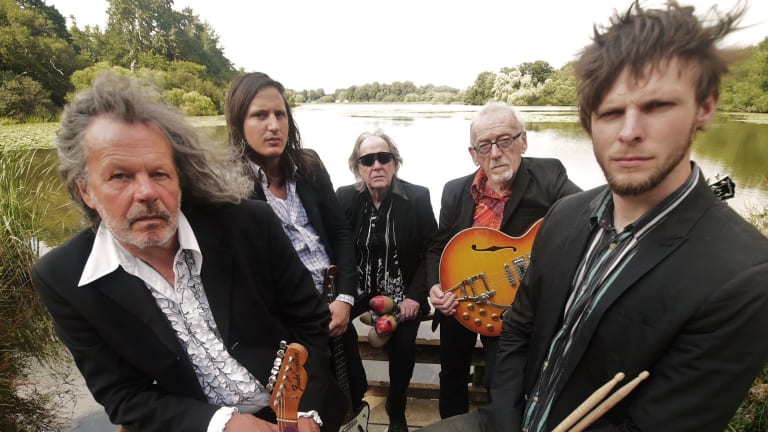 Make no mistake, this is a chance to see live on stage one of the original English rock bands that shaped the look and sound of things to come. In fact, the bands joining the Pretty Things for their upcoming tour may not even exist, had it not for the likes of Taylor, May and others who carved the psychedelic, rock 'n' roll path of the late `60s and into the 1970s. Tumbleweed will support the Pretty Things on Wednesday, October 3, at The Factory in Sydney; while on Saturday, October 6, they'll be joined in Melbourne at the Thornbury Theatre by Sand Pebbles and the Electric Guitars.

And for the record, original drummer Vivian Prince only lasted a couple of years in the Pretty Things before his wild antics had him forced out of the band, but not before he'd made a considerable impact on a young Keith Moon, who went on to become a handful himself, both onstage with The Who and off stage. Taylor, May and fellow current band members Frank Holland (guitar), George Woosey (bass) and Jack Greenwood (drums) will also play at the Caravan Club in Melbourne on October 7, Geelong's Barwon Club on October 8 and the Tote in Collingwood on October 12. For all tour dates, go to theprettythings.com

album of the week
The Sha La Das
Love in the Wind
(Daptone Records)
★★★★
​The Schalda brothers, Carmine, Paul and Will, recall being their father's backing group when `60s doo wop and R&B singer Bill Schalda would gather them all together to sing on the family's front stoop in New York's Staten Island. Here, they're all gathered together again as the Sha La Das, Bill and his boys harmonising Beach Boys style on their smooth-as-silk debut album. It sure sounds like the '60s with the Schalda's and musician friends, including the Dap-Kings' Victor Axelrod and Dave Guy, bringing their soulful sound into a fast-paced, modern world that desperately needs some down time.