Move over Michael Jackson, 'cause there's a new album in town – and by new, we mean new to the top of the best-seller list.

The Eagles' greatest-hits album is now the No.1 best-selling album of all time in the US, according to the Recording Industry Association of America. 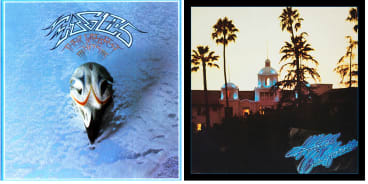 The Eagles’ Greatest Hits and Hotel California are now the number one and three best-selling albums of all time.

The rock band's 1976 album Their Greatest Hits 1971-1975 has been certified 38x platinum in the United States, meaning sales and streams of the album have reached 38 million.

Jackson's Thriller now resides in second place at 33x platinum. The Eagles also own third place on the chart with the Hotel California album hitting 26x platinum, the RIAA said.

"We are grateful for our families, our management, our crew, the people at radio and, most of all, the loyal fans who have stuck with us through the ups and downs of 46 years. It's been quite a ride," founding member Don Henley said in a statement.

It's been about 12 years since the industry organisation checked the total on Greatest Hits, while Thriller's total got an update in 2017; hence the big leap in the Eagles' performance. The band has also gone back on the road in recent years.

The RIAA began giving streaming performance gold and platinum status a few years back, then added those totals to the album-sales count starting in early 2016.