Archaeologists discover a 3,200-year-old shrine to a knife-wielding SPIDER GOD associated with rain and fertility in Peru

A giant 3,200-year-old mural of a spider god has been discovered in Peru.

The scene reveals an arachnid holding various knives and it is thought locals prayed to the mysterious god in the belief the deity had control of fertility and rain.

Most of the relic has been destroyed by farmers who tried to remove the mural in an effort to expand their arable land. 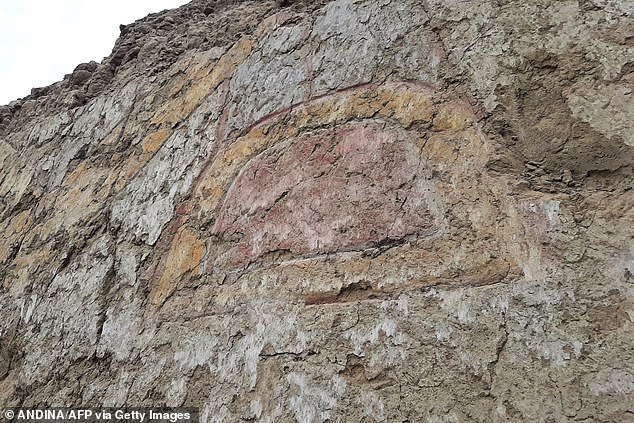 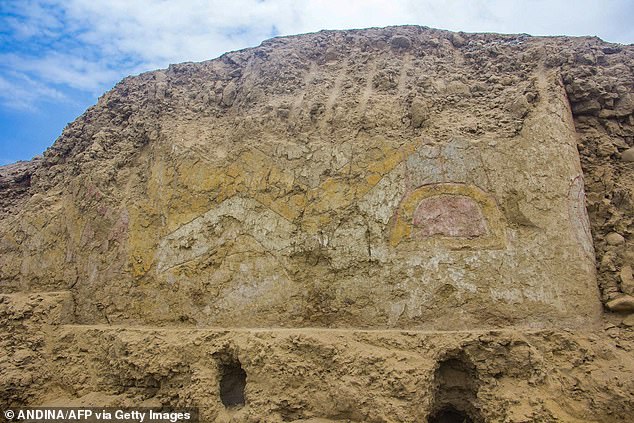 Most of the relic has been destroyed by farmers who tried to remove the mural in an effort to expand their arable land. Images of the mural taken by local photographers reveal scars of the attempted demolition etched into the ancient mural

Who were the Cupisnique people?

They predate the Chavin culture and provided some inspiration for these people.

Cupisnique culture extended along the Peruvian coast from the Virú valley up to the Lambayeque drainage.

It had close relations with highland cultures and the occupants of the coastal valleys to the north and south.

Sometime after 500 BC the culture became integrated into the Chavín.

The discovery was made in the valleys of the province of Viru in the Peruvian department of Lambayeque.

Locals uncovered the ancient site while using large machinery such as excavators to expand their avocado and sugar cane plantations.

Images of the mural reveal scars of the attempted demolition etched into the ancient artwork.

Archaeologist Regulo Franco Jordan was alerted about the site’s discovery by a friend and immediately went to investigate.

‘When I got there I was very surprised to see this impressive facade with geometric shapes,’ he told local news.

It is believed the vibrant colours were made with ochre as well as yellow, grey and white paint on a mud wall structure.

The people that deemed the spider to be a god are thought to have belonged to the Cupisnique culture which dominated the northern coastal stretch of Peru around 1,000BC.

Jordan concluded the location of the burial site, a ‘huaca’, near a river is deliberate and likely indicates the spider mural adorned a temple to water deities.

‘What we have here is a shrine that would have been a ceremonial centre thousands of years ago,’ Jordan told Peru’s La República newspaper.

‘The spider on the shrine is associated with water and was an incredibly important animal in pre-Hispanic cultures, which lived according to a ceremonial calendar.

‘It’s likely that there was a special, sacred water ceremony held between January and March when the rains came down from the higher areas.’

Officials were made aware of the presence of the monument and it has now been registered and protected from further damage. 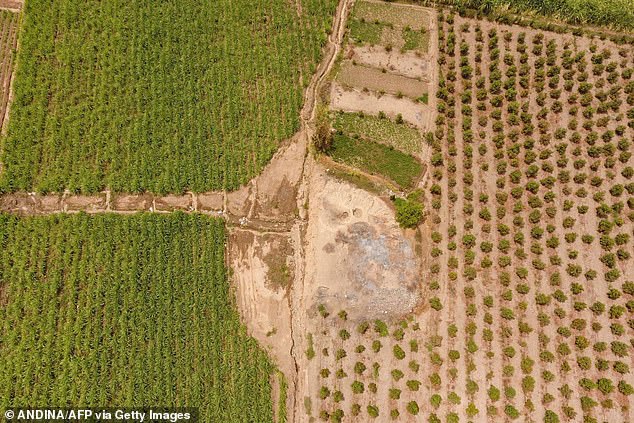 Pictured, an aerial picture of a pre-Hispanic mural dating more than 3,200 years recently discovered on an ancient ceremonial site belonging to the Cupisnique people, sitting in an agricultural field in the northern valley of Viru, about 500 km north of Lima