First super high-definition images of the Titanic shipwreck reveal a ‘partial collapse’ of the iconic ship’s hull 13,000 feet below the Atlantic Ocean

Explorers making the first manned voyage to the Titanic wreckage in 14 years said they have uncovered a partial collapse of the ship’s hull.

Around 13,000ft (4,000m) beneath the surface of the Atlantic Ocean, salt corrosion and metal-eating bacteria have worn away parts of the liner’s structure.

The team of divers found that the hull near the officers’ quarters on the starboard side of the ship has started to collapse, taking with it the vessel’s luxurious stateroom accommodation, according to exploration company Caladan Oceanic. 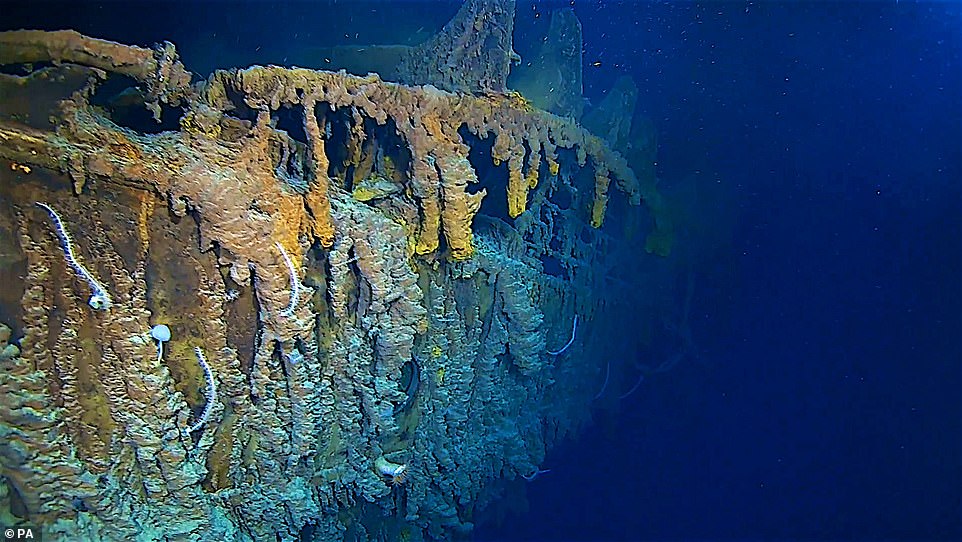 Around 13,000ft (4,000m) beneath the surface of the Atlantic Ocean, salt corrosion and metal-eating bacteria have worn away parts of the liner’s structure (pictured) 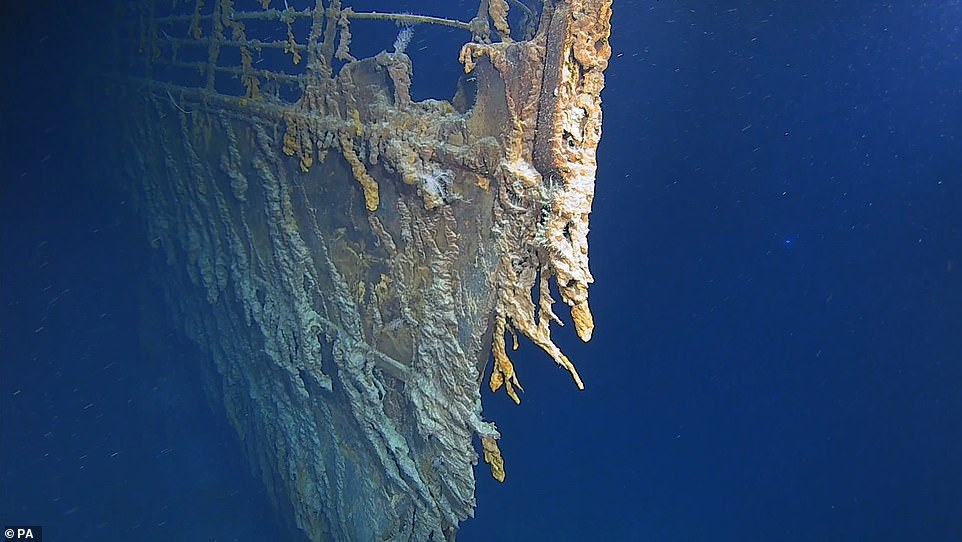 Natural processes have caused parts of the hull to start to collapse and have been captured in new images (pictured). They will be published alongside a documentary, which is being made by film company Atlantic Productions 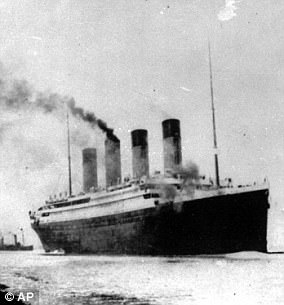 ‘Captain’s bath tub is a favourite image among the Titanic enthusiasts, and that’s now gone.’

The first ever 4K quality images of the ship were captured during the expedition and will be published alongside a documentary, which is being made by film company Atlantic Productions.

The footage will also make it possible to view the wreckage using interactive augmented reality and virtual reality technology.

Explorer Victor Vescovo, who is also chief executive of Caladan Oceanic, said he ‘wasn’t quite prepared’ for how large the wreckage is.

He added: ‘It was extraordinary to see it all, and the most amazing moment came when I was going along the side of the Titanic and the bright lights of the submersible reflected off a portal and came right back – it was like the ship was winking at me. It was amazing.’

The Titanic is ‘going to continue to deteriorate over time’ as part of a natural process, according to scientist Lori Johnson, who added that bacteria is acting like ‘a community working symbiotically to eat’ the wreckage.

A total of five dives to the wreck, which lies around 370 miles (596km) south of Newfoundland in Canada, were made over eight days using a submergence vehicle.

The Titanic, built by Belfast’s Harland and Wolff shipyard, sank after hitting an iceberg on her maiden voyage from Southampton to New York in 1912, resulting in the deaths of more than 1,500 people.

DISASTER IN THE ATLANTIC: HOW MORE THAN 1,500 LOST THEIR LIVES WHEN THE TITANIC SUNK

The RMS Titanic sank in the North Atlantic Ocean on April 15, 1912, after colliding with an iceberg during her maiden voyage from Southampton to New York.

More than 1,500 people died when the ship, which was carrying 2,224 passengers and crew, sank under the command of Captain Edward Smith.

Some of the wealthiest people in the world were on board, including property tycoon John Jacob Astor IV, great grandson of John Jacob Astor, founder of the Waldorf Astoria Hotel.

The ship was the largest afloat at the time and was designed in such a way that it was meant to be ‘unsinkable’.

It had an on-board gym, libraries, swimming pool and several restaurants and luxury first class cabins.

There were not enough lifeboats on board for all the passengers due to out-of-date maritime safety regulations.

After leaving Southampton on April 10, 1912, Titanic called at Cherbourg in France and Queenstown in Ireland before heading to New York.

James Moody was on night watch when the collision happened and took the call from the watchman, asking him ‘What do you see?’ The man responded: ‘Iceberg, dead ahead.’

By 2.20am, with hundreds of people still on board, the ship plunged beneath the waves, taking many, including Moody, with it.

Despite repeated distress calls being sent out and flares launched from the decks, the first rescue ship, the RMS Carpathia, arrived nearly two hours later, pulling more than 700 people from the water.

It was not until 1985 that the wreck of the ship was discovered in two pieces on the ocean floor.