This month, NASA announced the results of two new papers that suggest giant dust towers on Mars could be responsible for emptying the planet’s one ample surface water stores.

This two new studies looked at atmospheric data from 2018, when dust-storms enveloped the entire planet and forced NASA’s Opportunity rover mission to come to an unexpected end.

During these storms, researchers observed enormous dust towers, as wide as Rhode Island and over 50 miles high, feeding gas vapors and dirt particles high into the Martian atmosphere 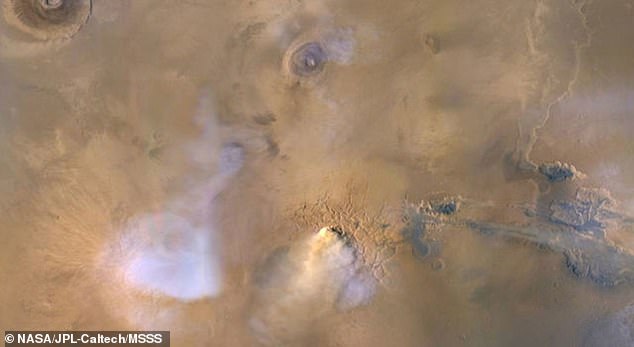 Researchers posit that these towers could have launched water vapor from Mars’s surface into the planet’s upper atmosphere, where intense solar radiation could have caused the vapor to separate from the dust particles it had bonded with.

Over a prolonged period of time, planet-wide dust towers such as those observed in 2018 could have helped empty out all the water reserves from the planet’s surface.

Scientists say the kinds of planet-wide storms that produce these giant dust towers happen every ten years or so on Mars.

‘Normally the dust would fall down in a day or so,’ Hampton University’s Nicholas Heavens told NASA.

‘But during a global storm, dust towers are renewed continuously for weeks.’

Heavens described the dust towers as ‘space elevators,’ which have been observed to transport a wide range of different material into the Martian atmosphere.

Heavens previous work showed how Mars’s dust storms could lift vapor and gas particles into Mars’s upper atmosphere, which helps explain the periodic formation of small white clouds that are sometimes visible above the planet’s surface.

With these storms periodically building into planet-wide swarms instead of isolated occurrences could help explain how Mars lost what appears to have once been a substantial amount of surface water at a number of different regions.

‘We really don’t have anything like this on the Earth, where the entire planet’s weather changes for several months. ‘

HOW OFTEN DO DUST STORMS HAPPEN ON MARS AND WHAT’S THE BEST WAY TO SEE THEM?

Dust storms occur frequently on Mars, but global events that circle the entire planet appear every six to eight Earth years, which equates to three to four years on the red planet.

MailOnline spoke to Dr Robert Massey, deputy executive director of the Royal Astronomical Society, for his advice on witnessing this extra-terrestrial weather event.

He said: ‘Observing Mars is always challenging, as it’s small, about half the size of the Earth, and at its closest is still around 34 million miles (55 million km) away.

‘It is easily visible to the eye as a bright red object in the sky, but seeing any detail requires a reasonable telescope and binoculars won’t show much.

‘Even with that, details are fleeting, and depend on a steady terrestrial atmosphere as otherwise turbulence blurs out the view.

‘This is why early Martian observers spent a lot of time making many sketches to try to map the planet’s surface.

‘A good time to look is when Mars is near its opposition, the point when the planet is opposite the sun in the sky and near its minimum distance from the Earth.

‘As it gets dark in the evening, you should look for a bright red object in the southeastern sky.

‘With a decent telescope, observers can see the polar caps growing and shrinking and the dust storms described above. These can rapidly change from being local features to planetwide events.’