Lying down on the job! The £6,0000 desk that will let office workers lie on their back

A San Francisco company is trying to convince office workers to start laying down on the job with an enormous reclining desk.

Created by Altwork, the Signature Station desk was first released in 2016 for $5,500, and the company recently demonstrated an updated $7,600 model that includes built-in plugs and an optional 40-pound spring housing to keep heavier computer displays in place.

According to Altwork, working from your back improves circulation, which can contribute both to minimize physical ailments and improve productivity. 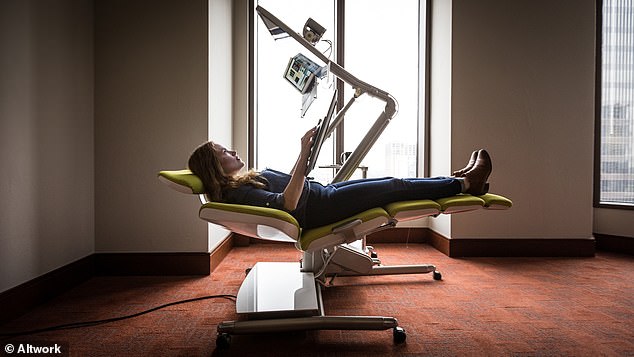 Altwork’s updated Signature Station desk costs $7,600 and will let users switch between a sitting position and lying on their back at a customizable angle they choose for themselves

In a new report on Altwork’s updated chair, Mashable’s Chris Taylor says the experience of working while lying down isn’t just more comfortable but more productive.

‘Freed of the distracting discomfort brought on by endless sitting or standing — the restless legs, the never-straight-enough spine — your brain suddenly finds itself more able to get on with the business of putting its best thoughts on the screen,’ Taylor writes.

‘Once you get over the panicky sensation that the monitor is about to drop on your face, that is.’

The demo left Taylor imagining ‘hours of productivity in comfort so complete it almost seems illegal.’

To help prevent all the keyboard and mouse in place, Altwork uses a set of magnets on the underside of its desk to keep everything securely in place.

While research on the exact effects of this position are scarce, some preliminary studies have shown substantial improvements in cognitive performance.

According to Altwork, working from a standard seated position with your torso and legs at a 90-degree angle, impedes blood flow as your hips fold in on themselves.

While lying back with your legs and torso opening to at least a 135-degree angle, blood can move more freely through your body.

One experiment, organized by Australian National University psychologist Darren Lipnicki, suggested there are real biochemical benefits to working from your back.

To test the idea, he gave subjects a set of 32 anagrams–a scrambled combination of letters that could be recombined to form a word. 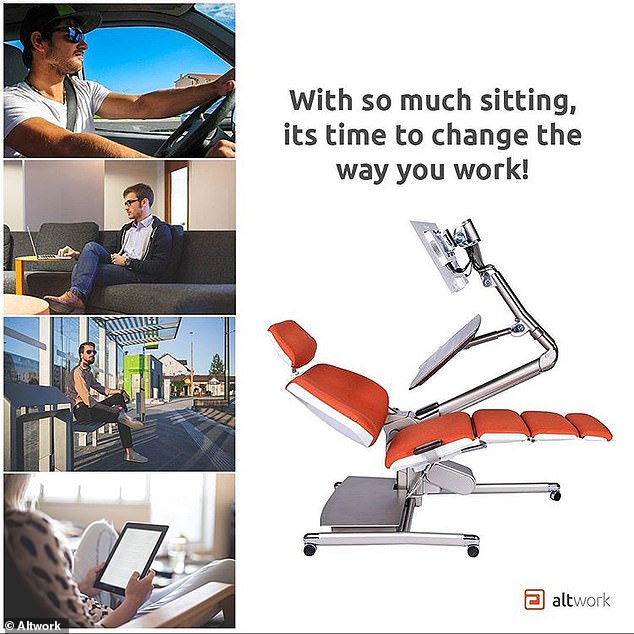 While comprehensive research is still lacking, Altwork argues that people experience better circulation on their backs, which can improve health and productivity alike

‘In theory, there may be greater release of a chemical, noradrenaline, in the brain when standing up than when lying down,’ Lipnicki told Phys.org.

‘It’s suspected that noradrenaline inhibits the abilities to solve anagrams and to think creatively so we decided to test the idea that lying down would actually help solve anagrams more quickly.’ 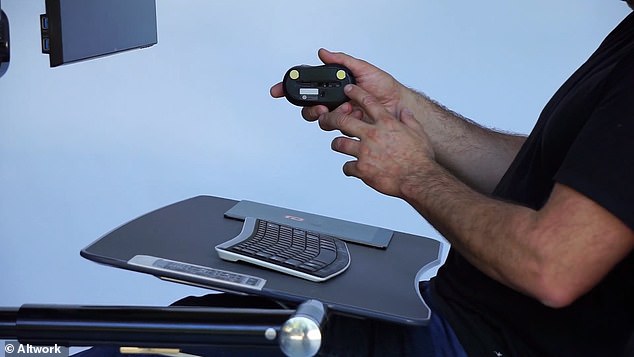 Altwork uses specially designed magnets to keep one’s keyboard and mouse in place on the metal desk, even when it’s perpendicular to the ground

Some subjects were asked to solve the anagrams while standing, and others worked on them while lying down.

He found the average completion time for the anagrams was almost 20 percent faster when the subjects were lying down, 26.3 seconds compared to 30 seconds.

Altwork’s CEO Che Voight has said many of his company’s clients use the desk to help with medical conditions, including spinal problems, though many leave those details out of their public testimonial about the company’s product. 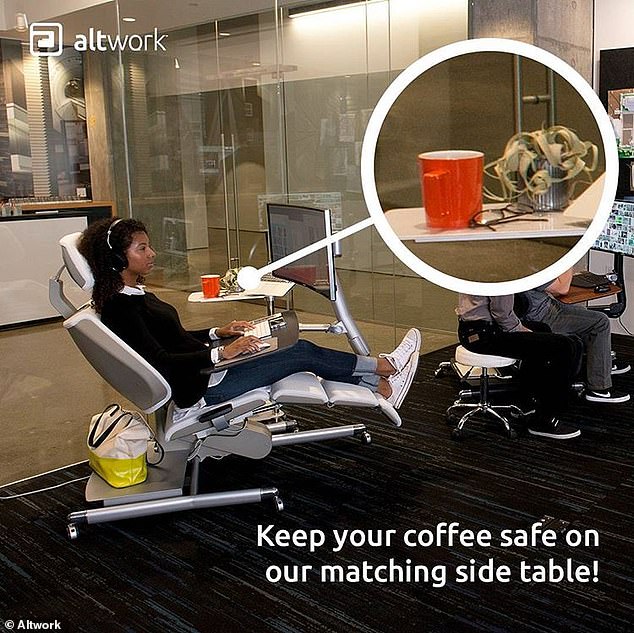 One person who experienced a demo of Altwork’s desk described ‘hours of productivity in comfort so complete it almost seems illegal.’

Researchers have long known that spending significant amounts of time in an upright seated position comes along with serious longterm consequences.

In 2019, a survey of 1,000 office workers in the United Kingdom found that almost half reported regular headaches, sore backs,  while 30 percent regularly had sore wrists, and 15 percent had sore legs.

The team also created a composite model of what an office worker in the future might look like, based on the complaints of the office workers they interviewed.

The composite was nicknamed Emma,  and was afflicted with irritated eyes, varicose veins, swollen wrists and ankles from poor circulation, a swollen nose from low quality office air, and a permanently bent back.

WHAT ARE EMMA’S AFFLICTIONS?

Emma — the office worker of the future — suffers from various health issues, which include:

A permanently bent back

Caused by sitting for hours with a posture.

Brought about by poor blood flow.

From long hours staring at a computer screen.

From years under artificial lighting.

Caused by stress at work.

A hairy nose and ears, as well as a swollen nose

All triggered by poor air quality.

Source: The Work Colleague of the Future report