Weighing up to 380,000 pounds and stretching some 100 feet long, the blue whale — the largest creature to have ever lived on Earth — might at first seem difficult for human eyes and ears to miss.

But a previously unknown population of the leviathans has long been lurking in the Indian Ocean, leaving scientists none the wiser, new research suggests.

The covert cadre of whales, described in a paper published last week in the journal Endangered Species Research, has its own signature anthem: a slow, bellowing ballad that’s distinct from any other whale song ever described. It joins only a dozen or so other blue whale songs that have been documented, each the calling card of a unique population.

“It’s like hearing different songs within a genre — Stevie Ray Vaughan versus B. B. King,” said Salvatore Cerchio, a marine mammal biologist at the African Aquatic Conservation Fund in Massachusetts and the study’s lead author. “It’s all blues, but you know the different styles.”

The find is “a great reminder that our oceans are still this very unexplored place,” said Asha de Vos, a marine biologist who has studied blue whales in the Indian Ocean but was not involved in the new study.

Dr. Cerchio and his colleagues first tuned into the whales’ newfound song while in scientific pursuit of a pod of Omura’s whales off the coast of Madagascar several years ago. After hearing the rumblings of blue whales via a recorder planted on the coastal shelf, the researchers decided to drop their instruments into deeper water in the hopes of eavesdropping further.

A number of blue whale populations, each with its own characteristic croon, have long been known to visit this pocket of the Indian Ocean, Dr. Cerchio said. But one of the songs that crackled through the team’s Madagascar recordings was unlike any the researchers had heard.

By 2018, the team had picked up on several more instances of the new whales’ now-recognizable refrain. Partnerships with other researchers soon revealed that the distinctive calls had been detected at another recording outpost off the coast of Oman, in the Arabian Sea, where the sounds seem particularly prevalent. Another windfall came later that year when Dr. Cerchio learned that colleagues in Australia had heard the whales crooning the same song in the central Indian Ocean, near the Chagos Archipelago.

Data amassed from the three sites, each separated from the others by hundreds or thousands of miles, painted a rough portrait of a pod of whales moseying about in the Indian Ocean’s northwest and perhaps beyond.

Using acoustic data to pin down a new population is, by nature, indirect, like dusting for fingerprints at the scene of a crime. But Alex Carbaugh-Rutland, who studies blue whales at Texas A&M University and was not involved in the study, said the results “were very sound, no pun intended.” 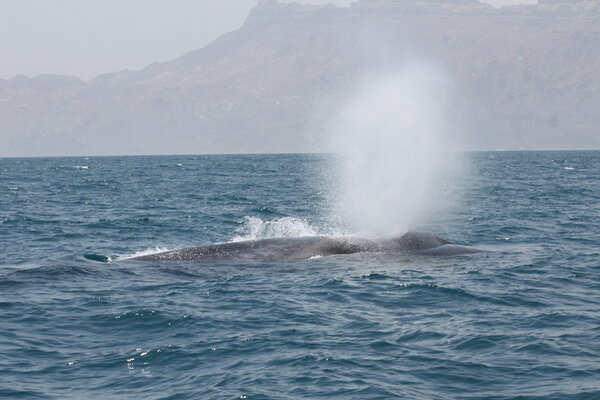 The researchers ruled out the possibility that the songs could be attributed to other species of whales. And side-by-side comparisons of the new blue whale tune with others showed convincingly that the northwestern Indian Ocean variety was distinct, Mr. Carbaugh-Rutland said. “I think it’s really compelling evidence,” he said, drawing a comparison to linguistic dialects.

Genetic samples would help clinch the case, he added. But blue whales, which spend most of their time far from shore, are difficult to study. Whaling in the 19th and 20th centuries also culled hundreds of thousands from their ranks; an estimated 10,000 to 25,000 blue whales are thought to remain.

Not much is known about blue whale songs, although most researchers think that they help males woo their mates, as is the case with closely-related species. That can make any modifications to a cetacean melody fairly high stakes, Dr. de Vos said: “If two populations can’t talk to each other, over time, they’re going to grow apart.”

Eventually, populations with different takes on a tune might splinter into subspecies, with their own behaviors and quirks. There’s not yet evidence to show that has happened with these blue whales, nor much information on what might have driven them apart from their southerly kin. But even if the whales in this new group don’t yet formally occupy a new branch on the tree of life, they are worth getting to know.

“What things like this show us is that there are different populations, with different adaptations, with potentially different needs,” Dr. de Vos said. To conserve the world’s blue whales, she said, “there’s not one single protection measure that’s going to work.”