Home » Science » A Record of Horseback Riding, Written in Bone and Teeth

The advent of horseback riding transformed our ancestors’ lives, irrevocably changing how they migrated, fought wars and traded. Now, researchers have found the oldest direct evidence of horseback riding in China, which could help unlock the historical timeline of how the civilization was affected by a newfound ability to get around on four legs.

While neighboring civilizations — such as those in the area now known as Mongolia — had been riding since roughly 1200 B.C., the timing and details of the rise of horsemanship in China have long remained murky, said William Taylor, an archaeologist at the University of Colorado Museum of Natural History in Boulder.

But the new study to which he contributed, published last month in Proceedings of the National Academy of Sciences, suggests that mounted equestrianism in China goes back as far as 350 B.C. That is consistent with the belief that horseback riding enhanced Chinese military might and contributed to the formation of the first unified empire during the Qin dynasty in the 3rd century B.C., and also helped catalyze the Silk Road trading route through China.

The team started by examining the horses’ vertebrae. Of the roughly 240 vertebrae the team studied, over 60 percent exhibited abnormalities like excessive bone growth, fusion and fractures. These pathologies were most common in the lumbar and thoracic vertebrae making up the lower back. 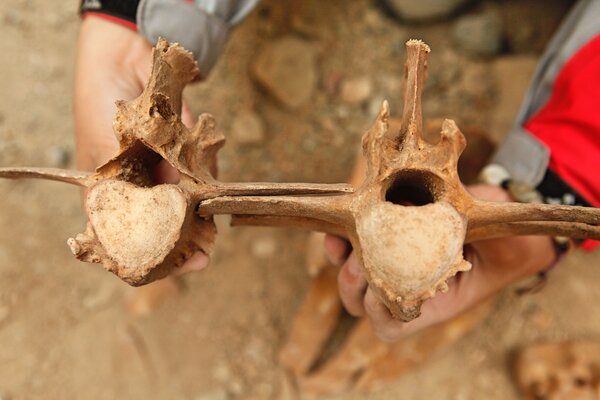 That’s telling, said Katherine Kanne, an archaeologist at Northwestern University in Evanston, Ill. who was not involved in the research. A horse’s lower back bears most of the stress from being ridden, she said.

Dr. Taylor and his collaborators next studied the skulls of seven of the horses. They found that six exhibited pronounced grooves in the bones of their nose. This pathology can arise in a horse that was worked strenuously, Dr. Taylor said, because heavy breathing causes certain muscles to become overdeveloped, which can in turn alter bone structure. “The depth of this groove is sort of a proxy for how heavily exerted an animal has been over its life.”

The scientists then analyzed the horses’ teeth. Dr. Taylor and his colleagues found that of the six horses with intact teeth, all showed signs of abrasion on their lower second premolars, consistent with traumatic contact between a bit and the horse’s teeth, Dr. Taylor said. A rider tugging sharply on the reins would pull the bit backward in the horse’s mouth, he said. “It can be yanked backward so far that it smacks into the teeth.”

Taken together, these bone and tooth abnormalities are textbook examples of what happens when horses are ridden heavily, said Alan Outram, an archaeologist at the University of Exeter in the United Kingdom, not involved in the research. “There’s no question that these horses are riding horses.”

Tracing the emergence of horseback riding is the first step to better understanding how this practice catalyzed crucial changes across China, Dr. Taylor said.

“We don’t know how horses went from being an animal that was primarily pulling chariots to one that was engaging in sophisticated cavalry combat,” he said. “Here are some clues to that story.”