Greenhouse gas emissions need to be slashed by more than seven per cent a year for the next decade – FOUR TIMES current targets – to avoid a ‘climate disaster’, study claims

A ‘wasted decade’ of inactivity and slow political progress mean nations must now do four times as much work to meet climate change targets, a new study claims.

Nations must quadruple their efforts, or do the same in one-third of the time, to comply with the climate pact they made as part of the Paris Agreement in 2015.

The accord commits countries to keeping the increase in the global average temperature well below 3.6°F (2°C) and attempting to limit it to 2.7°F (1.5°C).

However, the report claims countries’ current proposals will lead to a slight increase in emissions by 2030, rather than halving them, as agreed.

Governments are to blame for a large gap between climate pledges and reality, and they and the private sector now need to switch into ‘crisis mode’, the report says.

Greenhouse gas emissions need to be slashed by more than seven per cent a year for the next decade to avoid ‘climate disaster’. 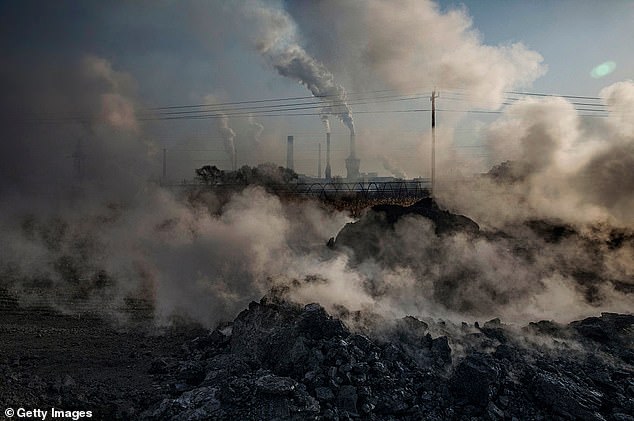 Steam and smoke from waste coal and stone rises after being dumped next to an unauthorised steel factory on November 3, 2016 in Inner Mongolia

The conclusions are based on a combination of 10 editions of the Emissions Gap Report, produced by the United Nations Environment Programme.

‘Clearly, the promises must be overhauled – and then, crucially, kept – if the yawning gap between “talk and walk” is going to close by 2030,’ the study, published in Nature, warns.

‘Had serious climate action begun in 2010, the cuts required to meet the emissions levels for 2°C would have been around two per cent per year, on average, up to 2030.

‘Instead, emissions increased, and therefore the required cuts from 2020 are now more than seven per cent per year on average for 1.5°C – close to three per cent for 2°C.’ 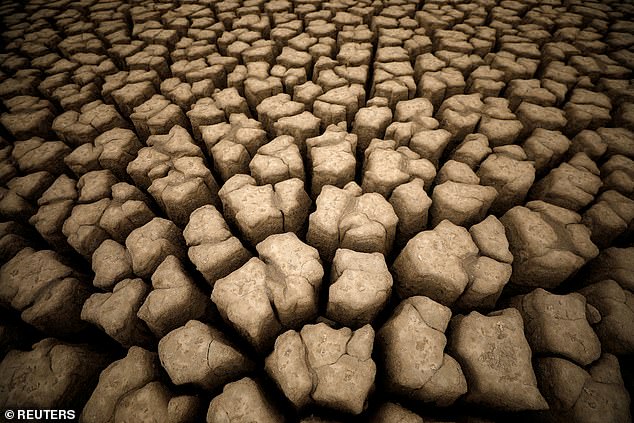 Cracks are seen in the dried up municipal dam in drought-stricken Graaff-Reinet, South Africa

It would also lead to the near-total extinction of coral reefs and extreme weather around the world.

The new report also warns that the time window for halving emissions has narrowed from 30 years in 2010 to ten years for 2.7°F and 25 years for 3.6°F.

WHAT IS THE UN ENVIRONMENT PROGRAMME?

Each year for the past ten years, the UNEP report has examined the gap between what countries have pledged to do individually to reduce greenhouse-gas emissions, and what they need to do collectively to meet agreed temperature goals.

The tenth anniversary of the report coincides with the 2020 milestone to which countries agreed in Paris.

The findings of the new study in Nature are based on pooling data from all 10 editions of the Emissions Gap Report produced by UNEP.

‘The gap is so huge governments, the private sector and communities need to switch into crisis mode, make their climate pledges more ambitious and focus on early and aggressive action,’ the report says.

‘Otherwise, the Paris Agreement’s long-term goals are out of reach.

‘We do not have another ten years.’

The research paper, which includes contributions from authors in the UK, say the situation is far worse than first feared owing to a ‘decade of insufficient political action on climate change’.

‘The past decade of political failure on climate change has cost us all dear,’ it says.

‘It has shrunk the time left for action by two-thirds.’

‘In 2010, the world thought it had 30 years to halve global emissions of greenhouse gases.

‘Today, we know this must happen in ten years to minimise the effects of climate change.

‘Incremental shifts that might once have been sufficient are no longer enough.’

The study found global annual greenhouse gas emissions increased by 14 per cent between 2008 and 2018 – meaning they now have to decline faster than was previously estimated. 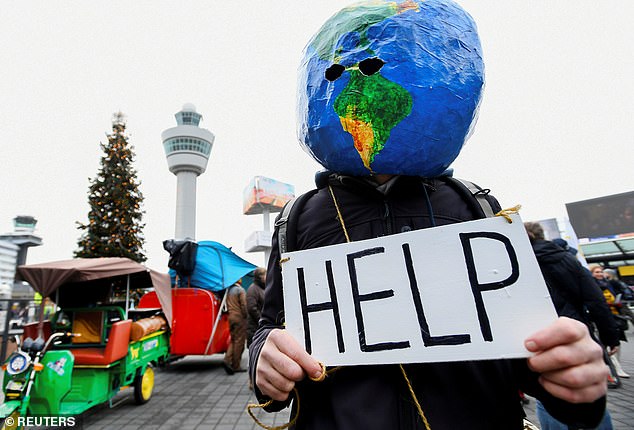 A man demonstrates as Greenpeace stages a climate protest at Amsterdam Schiphol Airport in Schiphol, Netherlands back in December 2019

The international community also agrees it must ensure a lower global temperature rise than it decided on ten years ago because climate risks are better understood.

The only time in recent history when emissions have fallen by around seven per cent – the new annual target – in any country came during the collapse of the Soviet Union.

During the financial crisis and recession emissions in the US and Japan fell briefly by about six per cent but soon rebounded.

However, it’s hoped increasingly cheap technologies such as renewable energy and electric vehicles could enable deep cuts in without jeopardising economic growth.

In the UK, another study revealed this week that UK carbon dioxide emissions have fallen to levels not seen since the 19th century during the reign of Queen Victoria, due to a huge reduction on the reliance of coal to generate power. 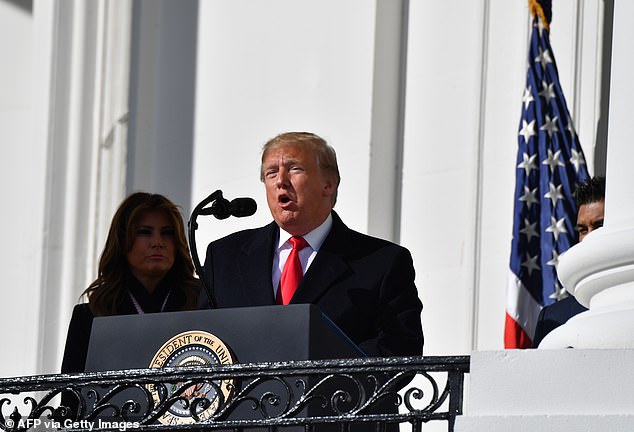 Out: Donald Trump’s administration formally started the process of leaving the Paris Climate accord signed by Obama in 2015

‘The United Kingdom – together with 75 other parties – and California have at least set ambitious goals to become carbon neutral, which might send signals to industry even before supporting policies are implemented,’ the report adds.

Latest estimates suggest the current pledges made by countries under the Paris Agreement would cause temperature rises of an alarming 5.76°F (3.2°C) this century.

The US controversially began the process of withdrawing from the Paris Agreement in November last year and will leave in November 2020.

Explaining the decision back in 2017, US President Donald Trump said the accord ‘disadvantages the United States’ and is ‘to the exclusive benefit of other countries’.