Adding lights to commercial fishing nets can reduce the number of endangered species, including sea turtles and dolphins, that get caught in them.

Just as hazard lights warn humans of danger, scientists found adding floating LED lights to the nets alerted many endangered species of the net’s presence – meaning a reduction of more than 70 per cent in the number caught.

Researchers at the University of Exeter and Peruvian NGO ProDelphinus believe they may have found a simple solution to end the thousands of animals that are unintentionally caught by net fisheries as ‘bycatch’.

The study looked at small-scale vessels departing from three Peruvian ports between 2015 and 2018, LEDs were placed every 30 foot along the float line of the illuminated net. 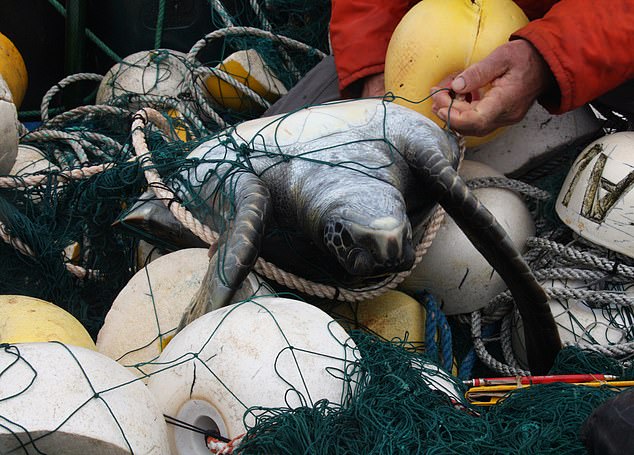 Sea turtle stuck in a net. The findings, from a trial in the waters of Peru, could help many species avoid extinction

While intelligent animals were able to spot the net, the lights made no change to the amount of commercial catch, meaning they are viable for fishermen to adopt without taking a hit financially.

Jeffrey Mangel, from the University of Exeter and Peruvian NGO ProDelphinus said: ‘The dramatic reduction in bycatch of sea turtles and cetaceans in illuminated nets shows how this simple, relatively low-cost technique could help these species and allow fishers to fish more sustainably.

‘Given the success we have had, we hope other fisheries with bycatch problems will also try illuminating their fishing nets.’ 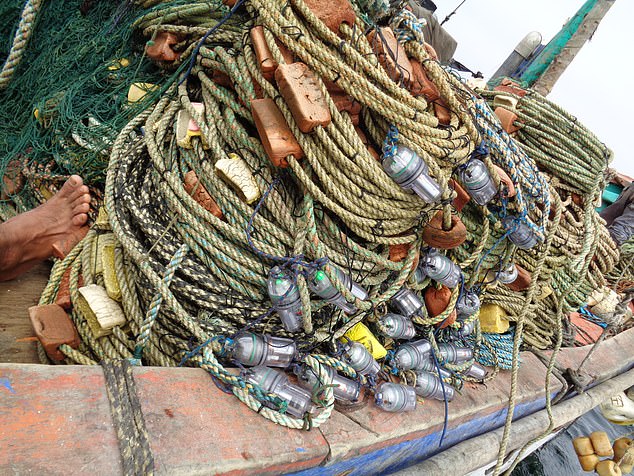 He told The Times: ‘Net fisheries are a massive problem for sea turtles, marine mammals, and incidental seabirds.

‘Tens of thousands of these animals die in the nets. It’s one of the main problems these species face globally.’

The findings could help many species including sea birds who are facing extinction due to the plight put upon them by human endeavor.

Gillnet fisheries were found to be particularly problematic. The fisheries are usually small and in coastal or fresh water estuary areas, they work due to animals becoming stuck in its mesh. 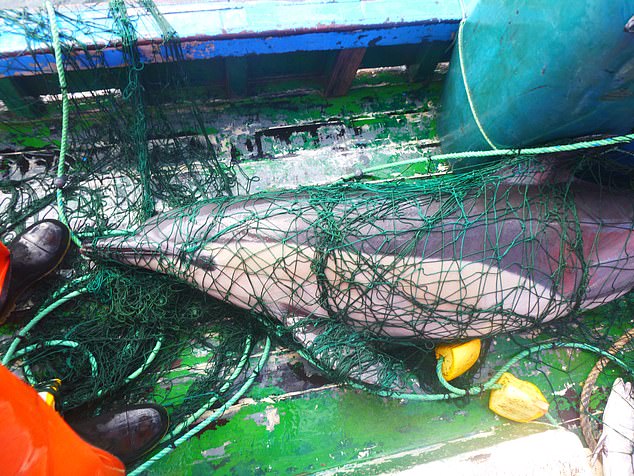 A dead dolphin can be seen in a gillnet after becoming tangled. Fishermen call the sad consequence of fishing ‘bycatch’

As dolphins and turtles who become stuck in the nets often tear and damage the nets fishermen are more likely to get on board with the solution.

They are usually suspended in the water with floating ‘corks’ – which would be replaced with lights for little cost if the findings are adopted.

More than one-third of the marine mammals and nearly one-third of sharks and fish are currently threatened with extinction due to the consequences of fishing and other human activity.

Dr Mangel, who set up the experiment in collaboration with the US National Oceanic and Atmospheric Administration told The Times the solution was a ‘win-win’ as it is ‘inexpensive, easy to explain, and it works’ – without ‘economic impact’. 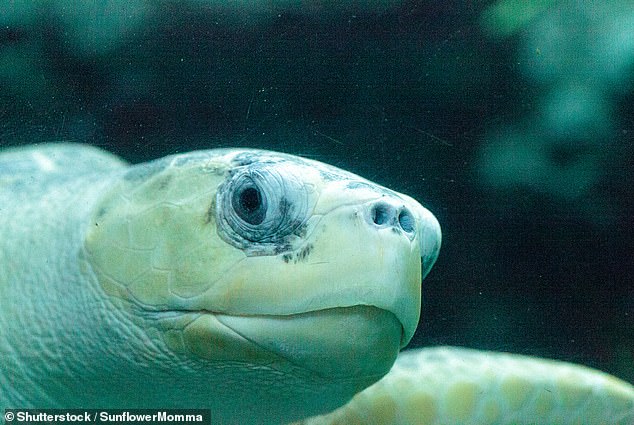 Olive ridley Sea turtle, Lepidochelys olivacea, is found swimming in the warm waters of the Pacific and Indian Oceans (stock)

Most of the turtles caught in the study were green turtles (86 per cent), though loggerhead and olive ridley turtles were also caught.

The results were published in the journal Biological Conservation.

Findings support previous research which suggested LED lights reduce bycatch of seabirds in gillnets by about 85 per cent.

WHAT ARE THE BIGGEST THREATS TO WILDLIFE?

In the United Nations’ first comprehensive report on biodiversity in May this year, a 39-page summary highlighted five ways people are reducing biodiversity: 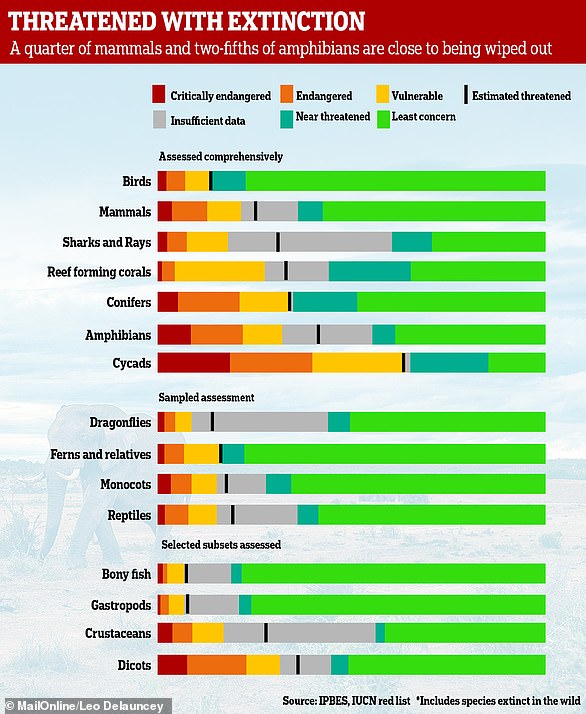 More than 40 per cent of the world’s amphibian species, more than one-third of the marine mammals and nearly one-third of sharks and fish are threatened with extinction, said UN 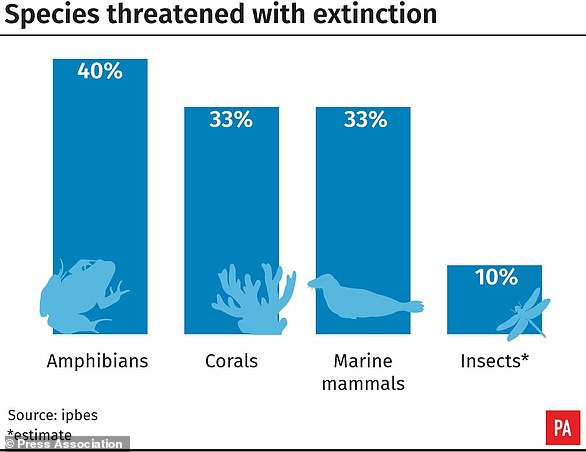 Species are being lost at a rate tens or hundreds of times faster than in the past, the report warns. More than half a million species on land lack sufficient habitat for long-term survival and are likely to go extinct – some within decades – and the oceans are not any better off