Home » Science » After Wildfires Stop Burning, a Danger in the Drinking Water

Two months after a wildfire burned through Paradise, Calif., in 2018, Kevin Phillips, then a manager for town’s irrigation district, walked from one destroyed home to another.

Burned out cars, the occasional chimney and the melted skeletons of washers and dryers were the only recognizable shapes.

“You started to actually be shocked when you saw a standing structure,” he said.

Mr. Phillips, now Paradise’s town manager, was following the team taking samples from intact water meters connected to homes that were now reduced to gray ash. He knew from the Tubbs Fire in 2017 that harmful toxins were likely in the water distribution system: Rapid action would be needed to protect people returning to the community from the dangers of toxins like benzene, which can cause nausea and vomiting in the short-term, or even cancer over time.

Wildfires, which turned skies a dim orange over cities from Seattle to Santa Cruz this year, are increasingly engulfing people’s homes, continuing to rage in California, Oregon, Washington and Colorado in recent weeks. But even when homes don’t burn, other dangers arise in the aftermath, and experts are focusing more attention on what happens to municipal water systems after a fire, when released toxins can get pulled into plumbing systems, and other damage can linger in pipes for years.

“It’s hard enough having the pandemic restrictions,” said Angela Aurelia, a resident of Boulder Creek in Santa Cruz County, whose home was partially damaged in August. “And then you have a wildfire, and you lose access to your home and then we can’t even go back home because the water isn’t likely safe to use.”

Mr. Phillips and some others who work to ensure the water flowing into homes is safe say they are following guidelines that are not designed for this kind of disaster.

After a fire, water in houses and in the underlying pipes “can become contaminated with an array of volatile organic compounds and semi-volatile organic compounds” at levels that exceed the regulatory limits set by the state of California as well as the federal Environmental Protection Agency, said Amisha Shah, a water quality engineer at Purdue University. “It’s very clear it needs to be addressed.”

Volatile organic compounds, such as benzene, naphthalene and methylene chloride, have a low boiling point and can be dispersed into the air easily. Semi-volatiles, including chrysene and benzo(b)fluoranthene, have a higher boiling point but can be dispersed during, for example, a warm shower. Although not all of these compounds are harmful, some have been found to cause cancer in the long term.

Dr. Shah was a co-author of the study published in July by AWWA Water Science that summarized the lessons from the past few years. Analyzing sample data from the Tubbs Fire as well as the Camp Fire that destroyed Paradise, the researchers found some of those harmful toxins caused by wildfires throughout the distribution system. Earlier concern had focused on ash runoff making its way into water sources, like reservoirs.

The researchers’ observations lined up with Mr. Phillips’s experience in Paradise two years ago.

“Over 50 percent of those service lines from burned structures had some detection of contamination,” he said.

But he noticed there was a randomness to it. Water in one house would be contaminated, while the neighboring system would be clear.

The state’s regulations appeared inadequate to deal with a post-wildfire scenario, forcing Mr. Phillips and his team to effectively improvise their own standards.

“We did go over and above what maybe the Water Board would’ve required us to do,” he said.

Had they not, he said, it might have taken years if not decades, to have clean drinking water again in the town. 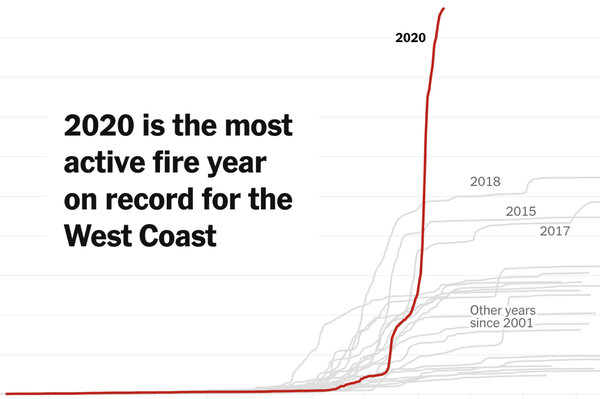 Record Wildfires on the West Coast Are Capping a Disastrous Decade

One after another, major fires exploded across Washington, Oregon and California earlier this month. They have added up to the worst fire season on record.

How water moves through distribution systems, especially during a wildfire, is complex and needs more study. But Dr. Shah and the other authors of the research say that a loss in pressure, which occurs when fires damage pipes, turns the plumbing into a vacuum that sucks smoke and other toxins out of burning homes. Those toxins then get circulated throughout a community’s water distribution system. It can even become worse, for example, when firefighters use a nearby hydrant, a necessary step that effectively encourages circulation.

In addition to toxins becoming more widely dispersed from those charred buildings, plastic piping common in California’s mountainous areas releases toxins when heated, melted or burned. The study’s authors said such piping, even if it was not damaged, could absorb toxins passing through them that would leach into the water over a long period of time.

In San Lorenzo Valley, for example, 7.5 miles of high-density polyethylene pipes burned and were destroyed on Aug. 21. The over-ground pipes, which wound through a steep, heavily wooded mountain in Santa Cruz County, supplied water to more than 21,000 residents. 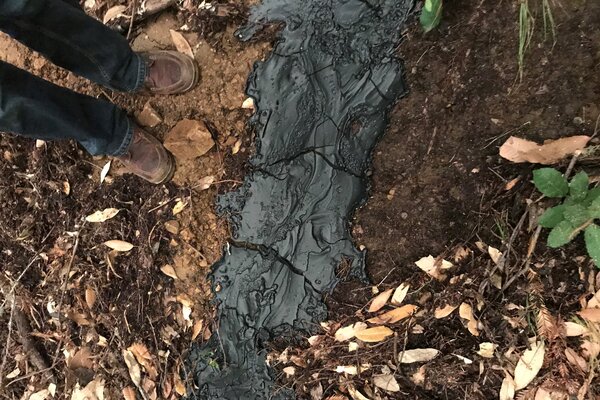 During the chaotic aftermath of a wildfire’s destruction, members of water districts can feel overwhelmed and confused about the best course toward ruling a system safe to use again. While many local water districts and other water utilities test for volatiles, most are not looking for semi-volatiles.

In the case of the San Lorenzo Valley pipes, for instance, regulators have been told to test only for the 80 or so compounds in the E.P.A.’s volatile organic compounds screening, despite evidence that burning plastic pipes release some semi-volatiles, too.

Advice for residents has also been inconsistent. While the state recommends “do not use” orders when there is “an unknown contaminant,” most utilities are being told to issue “do not drink, do not boil” orders to prevent ingestion. But scientists worry that even taking a shower or washing may not be safe if the water has high levels of the compounds. Some toxins can be inhaled when the water is aerosolized.

Rick Rogers, the district manager at San Lorenzo Valley Water District, said it was “following the state regulation to the letter.” They issued a “do not drink, do not boil” order but have not been told to issue a “do not use” order.

The district’s advisory issued on Aug. 29 told residents that they could shower, but should “limit shower time” and “ventilate the area well.” It also recommended that “the safest option is to use alternative water for showers.” In public meetings, residents expressed confusion over the orders. Subsequent tests have found benzene in the valley’s water supply.

Since 2014, the state of California put the responsibility for water safety in the hands of the State Water Resources Control Board.

The regulations in place for local water utilities are designed for normal day-to-day activity. The board’s recommended tests are aimed at finding routine contaminants. Because there is no rule book for a wildfire disaster, the regulations do not take into account all of the toxins that scientists are now recognizing as wildfire fallout.

In some cases, the state board has recommended tests that only look for benzene, which they consider to be a major flag for other contaminants.

“Benzene has been the leading indicator of contamination in every case where there have been combustion products that have gotten into the water system,” said Stefan Cajina, of the board’s division of drinking water.

He added that testing for semi volatile contaminants could be useful, “but in our experience they’re not likely to be there unless benzene is also present.”

Many scientists disagree with this assumption, and the data that Dr. Shah and her colleagues studied showed carcinogenic semi-volatiles when there was no benzene present.

“There’s enough information to be cautious,” said Fernando Rosario-Ortiz, director of environmental engineering at the University of Colorado, Boulder, who was not involved in the study. “It’s definitely teaching water utilities that if you go through a case like Santa Rosa did, and the Paradise fire, that under those criteria you should definitely do some additional testing.” 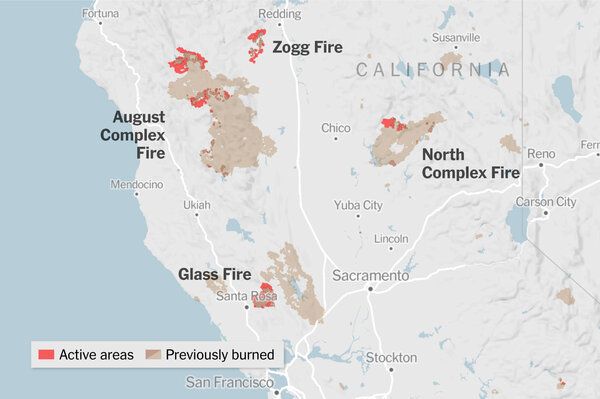 Where major fires are burning in the Western states and how unhealthy air quality has become.

Prioritizing time and efficiency during an emergency, the state is advising water utilities to test for the toxins that are most likely to be found. Mr. Cajina said testing for other toxins, likes the semi-volatiles, might take more time and cost more.

“That type of testing might be more appropriate for long-term study than for immediate active fire response,” he said.

But as Dr. Shah and colleagues report in their study that when fires burn homes and pipes, other potentially harmful toxins have also been found later on. If contamination is not contained, it can quickly spread throughout the system.

“Time is of the essence in not allowing residential units, or any location where they would want to use water, to open up the tap and then expose themselves,” she said.

Part of the problem is a lack of clear authority during a state of emergency, with the authority for water remaining spread out over various federal and state agencies.

“There is no water specific mission in the national response framework,” said Kevin Morley, manager of federal relations at the American Water Works Association. With so many departments overseeing water during an emergency, it becomes difficult to ascertain clear authority, direction and support.

Other states are now looking to California’s guidelines and regulations to inform how they tackle their wildfire water safety. An Oregon agency last month issued a guide for testing for volatile organic compounds that seems to replicate California’s recommendations, copying some of the problems that scientists have warned about.

As wildfires worsen and grow increasingly common, experts like Dr. Shah are calling for clear federal or state guidelines that local water utilities can follow.

They recommend testing for a wide range of compounds, throughout entire water systems, and the need to issue “do not use” orders for residential water until results are available. Pre-emptive measures, like installing one-way valves at home water meters and shutting off water systems ahead of a fire’s encroaching threat, could isolate contamination. San Lorenzo Valley Water District shut down part of its system, for example, which might have helped avoid some spread.

Mr. Phillips said that as wildfire dangers persisted, states and towns needed to be more “prepared for the unknown.

“You have to put the worst-case scenario into a stress test and then build a response around that.”