Picasso’s hidden nude is revealed! Scientists use AI to recreate a painting of a naked woman that lies beneath one of his existing masterpieces — The Blind Man’s Meal

A hidden Picasso painting of a naked, crouching woman that lies underneath one of his other works has been reconstructed by scientists using artificial intelligence and three-dimensional printing.

The team from University College London (UCL) said that their one-off replica of ‘The Lonesome Crouching Nude’ will ensure the work is no longer ‘erased from history’.

Experts believe that Picasso painted over the work with some reluctance in order to reuse the expensive canvas at a time, early in his career, when he was relatively poor.

The original was first revealed under Picasso’s late 1903 work ‘The Blind Man’s Meal’ — a restatement of the Christian sacrament — by X-ray fluorescence scans in 2010.

Its discovery ended a long search for the lost work — which was known from its depiction in the background of ‘La Vie’, a contemporary oil painting by Picasso.

All three works come from the artist’s ‘Blue Period’ of 1901–1904, which were all monochromatic and inspired in part by the suicide of his friend Carles Casagemas, as well as by Picasso’s travels through Spain.

‘The Blind Man’s Meal’ — and the earlier work it conceals — is presently held in the collections of The Metropolitan Museum of Art in New York.

This is not the first lost work recreated by the researchers. They previously replicated a portrait of woman hidden under Amedeo Modigliani’s 1917 ‘Portrait of a Girl’. 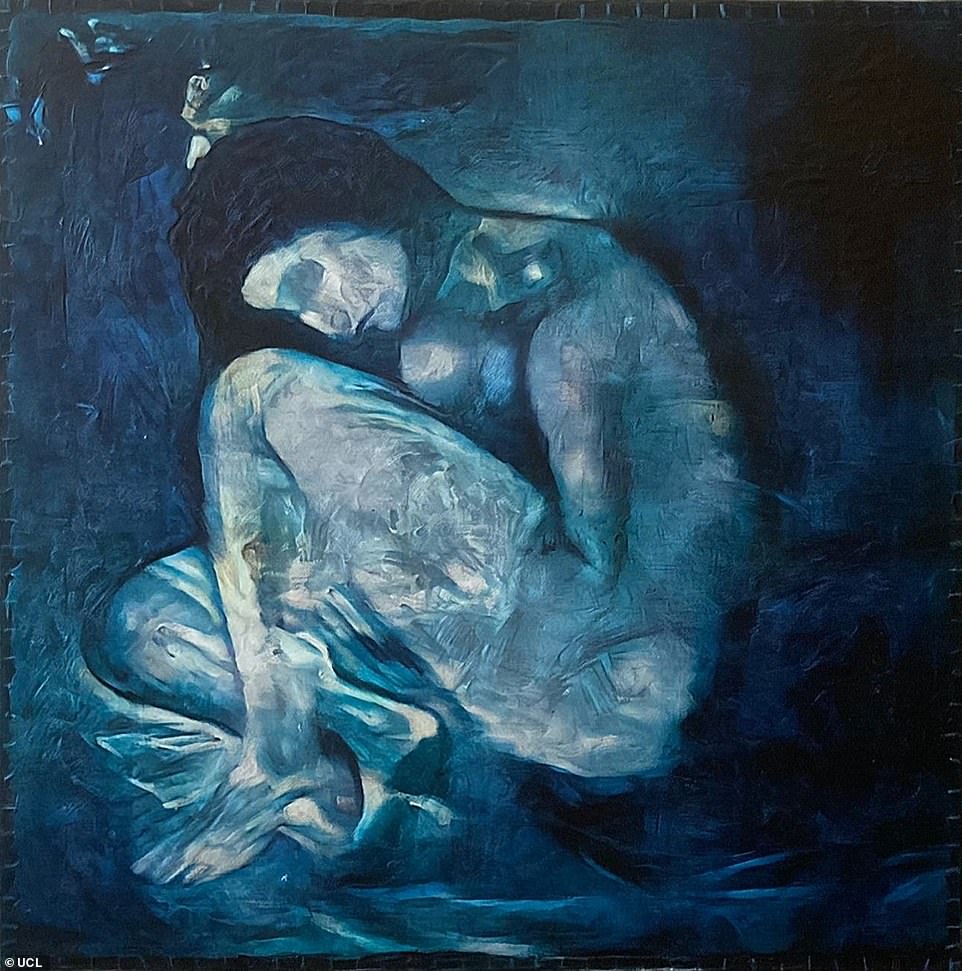 A hidden Picasso painting of a naked, crouching woman (pictured) that lies underneath one of his other works has been reconstructed by scientists using an artificial intelligence 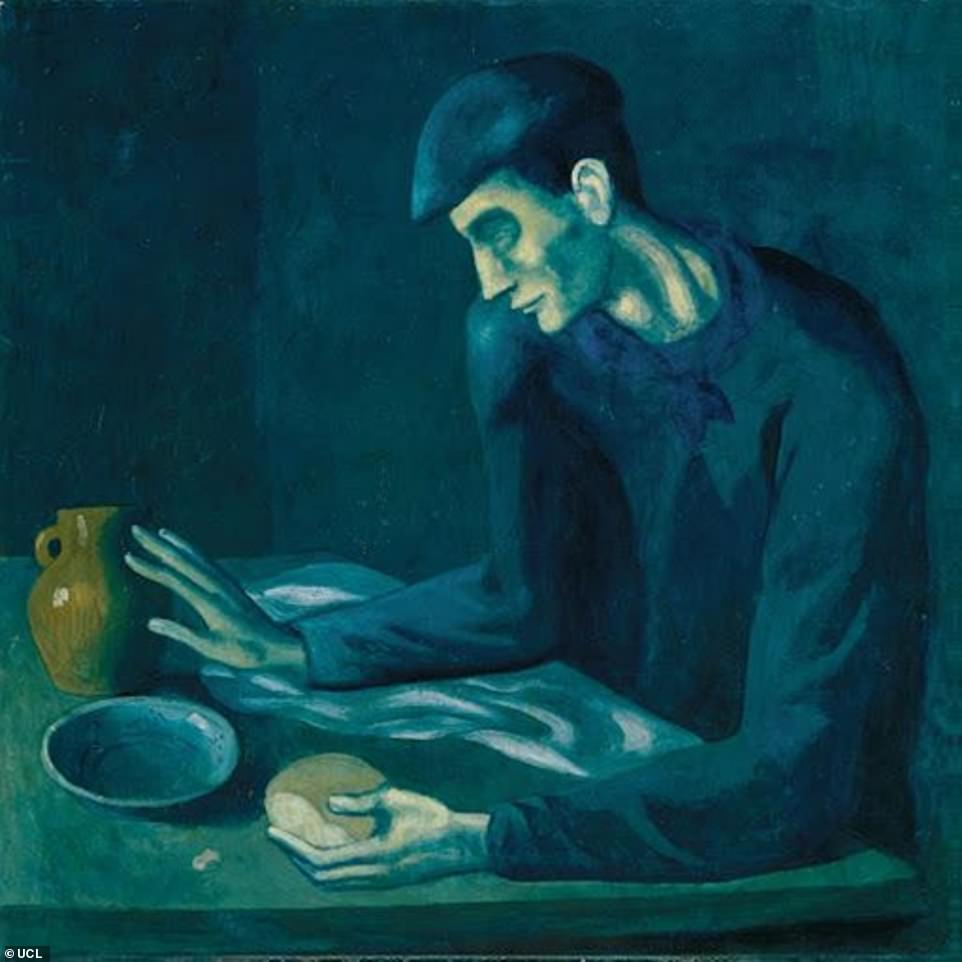 The Spanish painter Pablo Picasso is widely regarded as one of the most influential artists of the 20th Century.

He is best known for his role in founding the Cubist movement — in which subjects are broken up and reassembled in an abstract form that combines multiple viewpoints — as well as for inventing the art forms of collage and its 3D counterpart, ‘constructed sculpture’.

While his early works — the recently-reproduced ‘The Lonesome Crouching Nude’ included — tended towards the naturalistic, his style became more experimental after 1906, taking inspiration from the works of the French painter Henri Matisse. 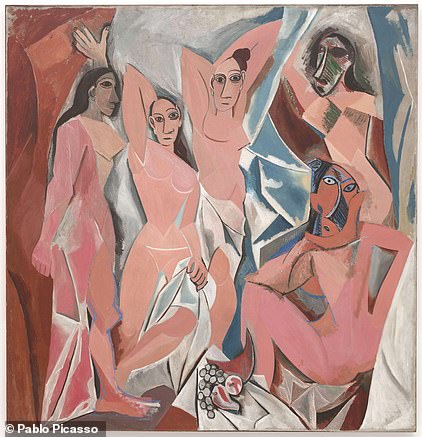 Pictured: Picasso’s proto-Cubist ‘Les Demoiselles d’Avignon’, which is often considered among his most famous works

‘I hope that Picasso would be happy in knowing the treasure he’s hidden for future generations is finally being revealed — 48 years after his death and 118 years after the painting was concealed,’ said UCL physicist and AI expert George Cann.

‘I also hope that the woman within the portrait would be happy in knowing that she hadn’t been erased from history and that her beauty was finally being revealed.

‘At the time that Picasso painted “The Lonesome Crouching Nude” and “The Blind Man’s Meal” he was poor and artist materials were expensive, so he likely painted over the former work with reluctance.

‘The fact that the woman within “The Lonesome Crouching Nude” is also within “La Vie” and a few of Picasso’s sketches suggests that Picasso may have had an affinity towards this woman.’

These images, however, contained traces of the overlying painting as well.

The team then used digital image processing to separate out the underlying and overlying images from each other as to produce a cleaner version of ‘The Lonesome Crouching Nude’.

Next, the team trained an AI neural network on a collection of Picasso’s work so it could learn the peculiarities of the Spanish painter’s technique. From this, the network is able to fashion an artificial version of the crouching nude in Picasso’s style.

Finally, the researchers combined the scans and the AI’s stylised painting create a ‘heightmap’ of the artwork used to 3D-print the replica work directly onto a canvas and give the finished piece texture.

The team’s reproduction of ‘The Lonesome Crouching Nude’ shows in better detail than the 2010 X-ray images how the figure depicted has posed in the shape of the human heart.

The researcher’s recreation of ‘The Lonesome Crouching Nude’ will go on public display in the online MORF Gallery from October 13, 2021.

‘We believe that Picasso likely painted over this piece with reluctance. It was common for his blue period work as it was early in his career, and materials were expensive,’ added Mr Bourached, also of UCL.

‘I believe Picasso actively welcomed such forensics, since he himself said “I just painted the images that rose before my eyes. It is for other people to find the hidden meanings.”

‘Like Leonardo imagining the helicopter, was Picasso envisioning technology that could recall his lost or incomplete work?

‘It is certainly a hidden secret that “La Vie” points to.’ 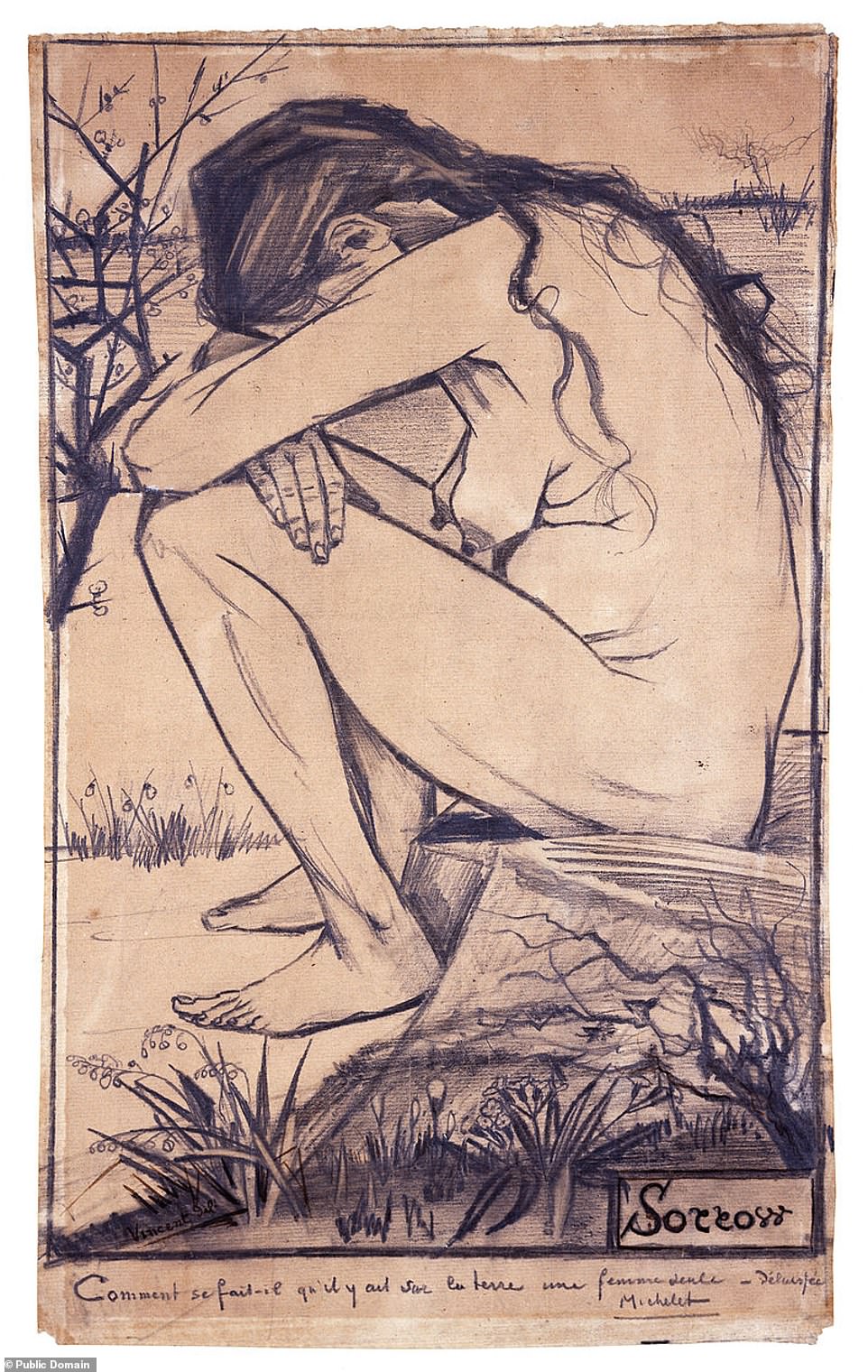 The team’s reproduction of ‘The Lonesome Crouching Nude’ shows in better detail than the 2010 X-ray images how the subject posed in the shape of the human heart — and bears a similarity to Vincent Van Gogh’s 1882 drawing ‘Sorrow’, pictured

The reconstruction has been met with a mixed reception.

‘It’s fascinating — not so much because of what it shows us — but because of what it doesn’t show us,’ Picasso expert Gary Tinterow told the Telegraph. Dr Tinterow is notable for having curated the 2010 exhibition for which ‘The Blind Man’s Meal’ was X-rayed and through which the hidden painting beneath was first revealed.

‘As a Picasso scholar, I’d rather look at the x-ray because, in the x-ray, every mark is by Picasso, whereas in this visual AI reconstruction, there’s a lot of information there which does not ring true to Picasso,’ he added. 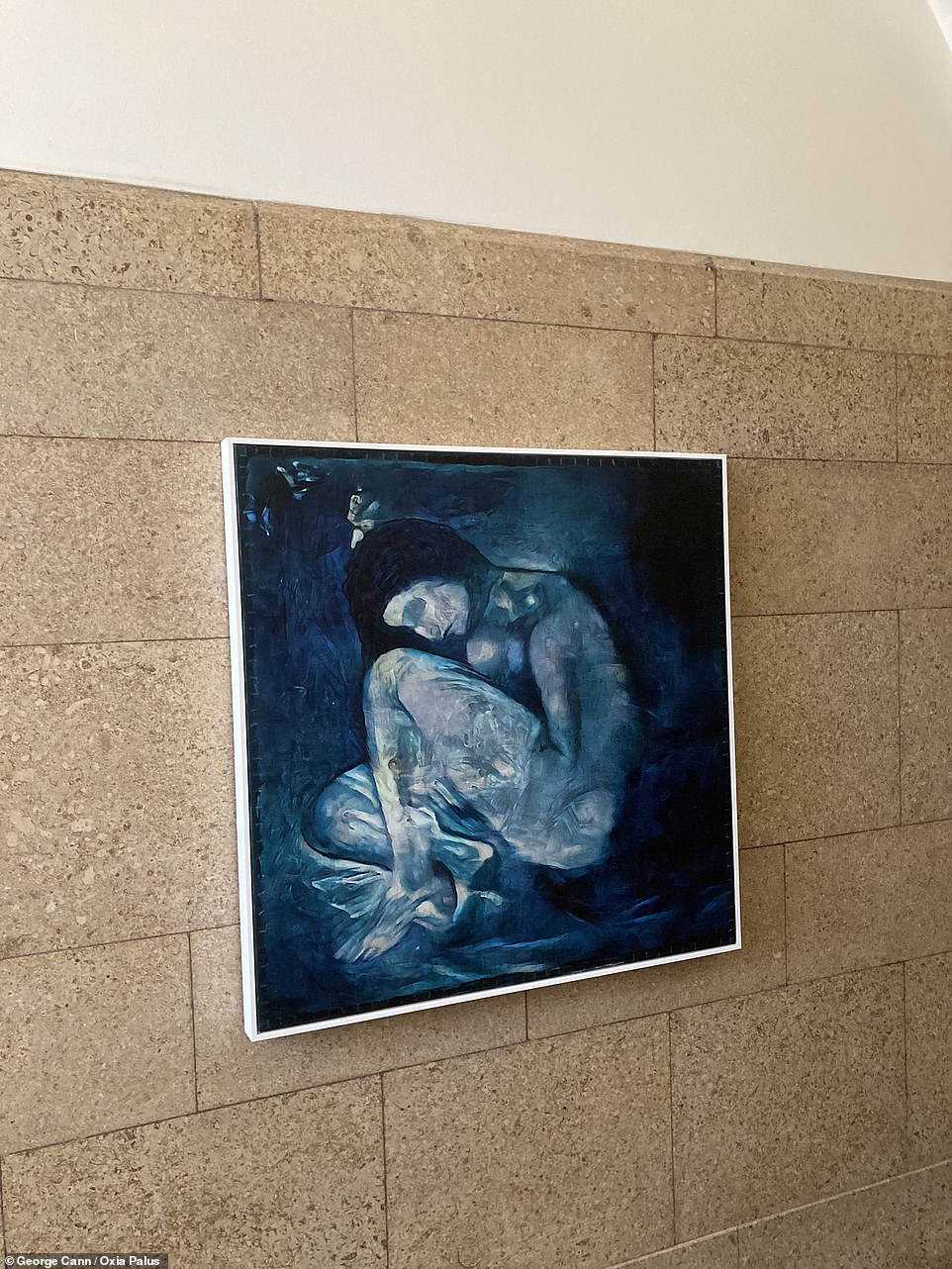 The researchers’ recreation of ‘The Lonesome Crouching Nude’ (pictured) will go on public display in the online MORF Gallery from October 13, 2021

‘The Blind Man’s Meal’, ”The Lonesome Crouching Nude’ and ‘La Vie’ all come from the Picasso’s ‘Blue Period’ of 1901–1904, which were all monochromatic in composition, featuring — as the name suggests — shades of blue and blue-green only occasionally warmed by other hues.

According to experts this sombre period of the Spanish artist’s work was inspired in part by the suicide of his friend Carles Casagemas — which appears to have trigged a severe depression — as well as by Picasso’s travels through Spain.

While now some of his most popular works, the ‘profoundly depressed and cheerless’ art — which often featured doleful depictions of subjects like prostitutes, beggars and drunks — proved unpopular with the public and prospective buyers alike, causing the artist to suffer financially as a result. 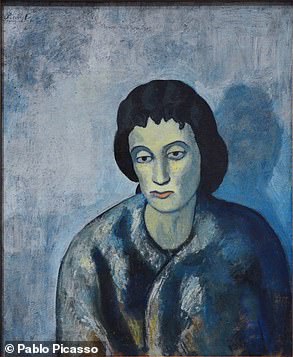 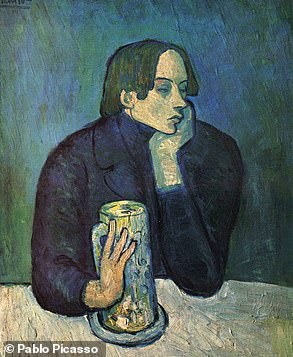 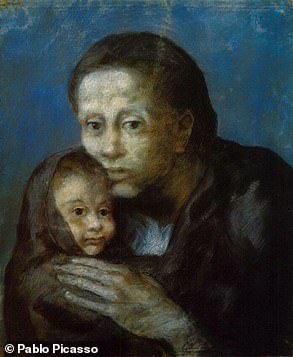 According to experts the sombre ‘Blue Period’ of the Spanish artist’s work was inspired in part by the suicide of his friend Carles Casagemas — which appears to have trigged a severe depression — as well as by Picasso’s travels through Spain. Pictured: examples of Picasso’s Blue Period, including ‘Woman with Bangs’ (1902), ‘The Glass of Beer’ (1901–1902) and ‘Desemparats’ (1903)