Alligators can REGROW their tails by up to 9 inches after they have been bitten off – just like lizards, study finds

Just like their smaller cousins, the lizards, young alligators are capable of regenerating lost tails — re-growing them by up to 9 inches, a study has found.

While small lizards are known to have limited regenerative capabilities, it was not clear whether the same applied to the larger reptiles, which can reach 14 feet long.

Experts from Arizona and Louisiana analysed alligators in the wild, and found that young ones could regrow complex tails of cartilage, connective tissues and nerves.

According to the team, the capacity to regrow tails when lost confers alligators with an advantage in their murky aquatic habitats. 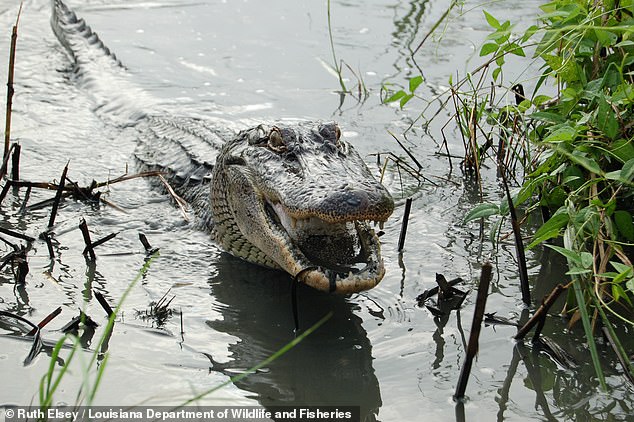 Just like their smaller cousins, the lizards, young alligators (pictured) are capable of regenerating lost tails — re-growing them by up to 9 inches (around 23 cm), a study has found

‘What makes the alligator interesting, apart from its size, is that the regrown tail exhibits signs of both regeneration and wound healing within the same structure,’ said paper author and biologist Cindy Xu of the Arizona State University.

‘Regrowth of cartilage, blood vessels, nerves, and scales were consistent with previous studies of lizard tail regeneration from our lab and others,’ she added.

‘However, we were surprised to discover scar-like connective tissue in place of skeletal muscle in the regrown alligator tail.’

In their study, Dr Xu and colleagues analysed the structure of the regrown tissues using various advanced imaging techniques — finding that the regenerated appendages were complex structures.

They comprise a central skeleton made of cartilage, surrounded by connective tissues interlaced with both blood vessels and nerves.

‘We see alligators in the field with some indication of possible regrowth of tail tissue,’ noted Louisiana Department of Wildlife and Fisheries biologist manager Ruth Elsey.

However, she explained, it was only when their biologists teamed up with the Arizona-based experts that they were able to detail ‘the histological changes associated with the capacity for possible partial tail regrowth or wound repair.’

Like us humans, alligators and lizards belong to a group of backboned animals called the amniotes. Understanding how different species regenerate lost body parts will shine light on the extent and nature of the process across the amniotes, the team said.

‘The ancestors of alligators and dinosaurs and birds split off around 250 million years ago,” said paper author and biologist Kenro Kusumi, also of Arizona State.

‘Our finding that alligators have retained the cellular machinery to regrow complex tails while birds have lost that ability raises the question of when during evolution this ability was lost.’

‘Are there fossils out there of dinosaurs, whose lineage led to modern birds, with regrown tails? We haven’t found any evidence of that so far in the published literature,’ Professor Kusumi added. 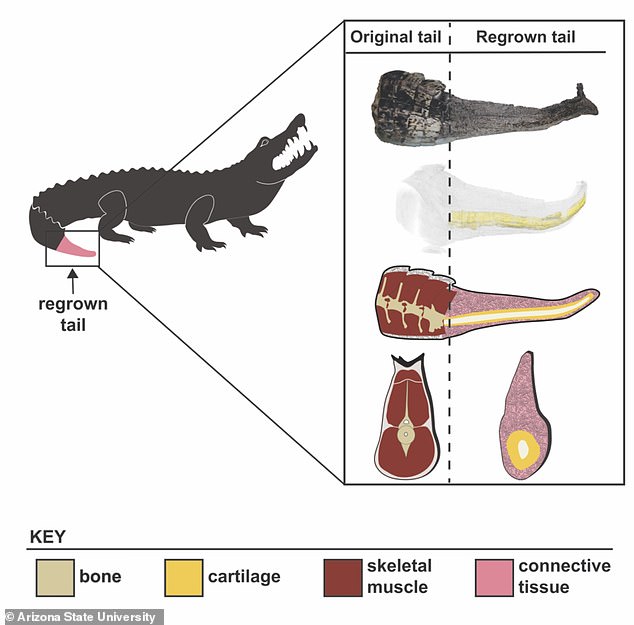 In their study, Dr Xu and colleagues analysed the structure of the regrown tissues using various advanced imaging techniques — finding that the regenerated appendages were complex structures. They comprise a central skeleton made of cartilage, surrounded by connective tissues interlaced with both blood vessels and nerves

‘Future comparative studies will be important to understand why regenerative capacity is variable among different reptile and animal groups,’ Dr Xu concluded.

The findings may also lead to medical applications — such as in the treatment of diseases like arthritis and in helping patients recover from injuries.

‘If we understand how different animals are able to repair and regenerate tissues, this knowledge can then be leveraged to develop medical therapies,’ said paper author and anatomist Rebecca Fisher of the University of Arizona.