In an interview on CBS Evening News, Bezos, who is also the CEO of a private aerospace company, Blue Origin, said that a storm of human industry and volume have created an impetus for advancing space travel.

‘We humans have to go to space if we’re going to continue to have a thriving civilization We’ve become big as a population, as a species, and this planet is relatively small,’ Bezos told interviewer, Norah O’Donnell.

‘We see it in things like climate change and pollution and heavy industry. We are in the process of destroying this planet.’ 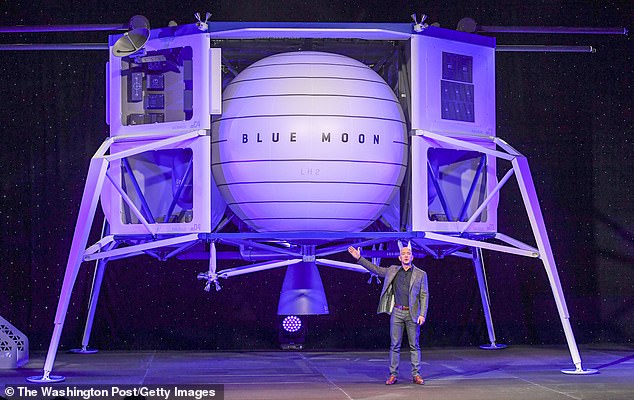 Blue Origin’s lander, Blue Moon, will look to pave the way for NASA’s next moon landing slated for 2024. The Amazon CEO is shown during an event earlier this year when he unveiled the lander

Bezos, who was interviewed next to Caroline Kennedy, former U.S. President John F. Kennedy’s daughter, said space exploration doesn’t necessarily mean leaving this planet, instead he says utilizing space to its fullest could help preserve the one we have.

‘We are in the process of destroying this planet. And we have sent robotic probes to every planet in the solar system — this is the good one. So, we have to preserve this planet,’ said Bezos.

To help save Earth from the insidious effects of climate change he said industry could transition to space, a process that Bezos has called The Great Inversion.

‘Eventually, it will be much cheaper and simpler to make really complicated things in space and then send those objects back down to earth,’ said Bezos.

‘I would think, kind of time frame of hundreds of years…We have to preserve this planet and we can do that using the resources of space.’

By farming out industrial manufacturing to other planets — or even the moon — Bezos said that Earth could be ‘zoned residential.’

With cheaper and sustainable transportation between Earth and say, the moon, Bezos said baron spaces like the lunar surface could be used as playgrounds for making microprocessors and more. 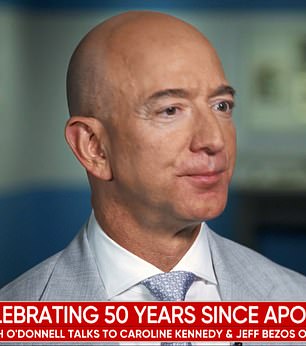 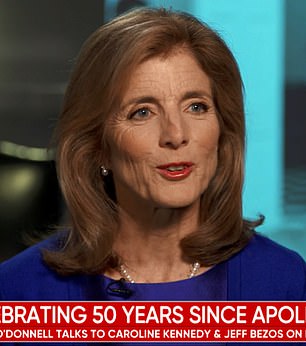 Bezos is among the biggest players in the private aerospace market, competing with Elon Musk’s SpaceX

‘We send things up into space, but they are all made on Earth,’ said Bezos.

‘Eventually it will be much cheaper and simpler to make really complicated things, like microprocessors and everything, in space and then send those highly complex manufactured objects back down to earth, so that we don’t have the big factories and pollution generating industries that make those things now on Earth.’

For the billionaire, this particular vision could very well become reality.

Bezos’ Blue Origin is among the favorites in an upcoming NASA mission to land humans back on the moon in 2024 — a feat that would mark the first time humans had stepped foot on the lunar surface in almost 50 years.

Already, Blue Origin has received multiple contracts from NASA to study and design prototypes for landers, propulsion systems, and more last month, some of which would help to enable the use of reusable landers and space mining.

The richest man in the world, Jeff Bezos is pursuing Blue Origin with vigour as he tries to launch his ‘New Glenn’ rocket into low-Earth orbit by 2020.

Whilst Bezos is yet to leave the atmosphere of Earth, despite several successful launches, Elon Musk’s SpaceX programme has already sent the Falcon Heavy rocket into space.

On February 6 2018, SpaceX sent the rocket towards the orbit of Mars, 140 million miles away.

On board was a red Tesla roadster that belonged to Musk himself.

SpaceX have won several multi-million dollar contracts from Nasa as the space agency hopes to use the rockets as a fast-track for its colonisation of the red planet.

It has successfully sent a Dragon capsule to the ISS and undocked without a hitch.

The billionaire mogul also said he expects Elon Musk to win the race to Mars with his private rocket firm SpaceX.

It climbs to 50,000ft before the rocket engine ignites. SpaceShipTwo separates from its carrier craft, White Knight II, once it’s passed the 50-mile mark.

The spaceship will then make a sub-orbital journey with approximately six minutes of weightlessness, with the entire flight lasting approximately 1.5 hours.