The modern world runs on a constant flow of money that has its roots in simpler proto-currencies pioneered on regional levels by ancient peoples.

A pair of archaeologists believe they have identified a very early example of commodity money in Europe, used some 3,500 years ago during the Bronze Age, with denominations that took the form of bronze rings, ribs and ax blades. People at this time frequently buried collections of these ubiquitous items, leaving a wealth of scattered “hoards” across the European continent.

In a study published on Wednesday in PLOS ONE, Maikel Kuijpers, an assistant professor in European prehistory at Leiden University in the Netherlands, and Catalin N. Popa, who was a postdoctoral researcher there, compared the weights of more than 5,000 Bronze Age rings, ribs and blades, sourced from over 100 hoards that contained five or more items.

The results revealed that 70 percent of the rings were so close in mass — averaging about 7 ounces — that they would have been indistinguishable if weighed by hand. While the ribs and ax blades are not quite as uniform, the study concludes that the artifacts are similar enough to collectively demonstrate “the earliest development of commodity money in prehistoric Central Europe.”

“It is a very clear standardization,” Dr. Kuijpers said.

While other researchers questioned some of their conclusions, they agreed that the study added to our knowledge of the economic activities of ancient peoples.

As bronze smithing spread through Europe, these rings, ribs and ax blades were cast for functional purposes — such as jewelry and tools — that might have been unrelated to money. Some of the items in the data set probably maintained strictly utilitarian or ornamental roles because their weights were well beyond the calculated average. 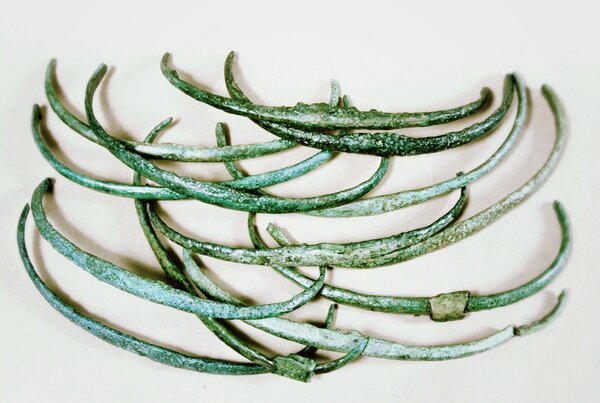 But the comparable weights of a large portion of the artifacts leaves “no doubt that at least the rings and ribs conform to the definition of commodity money,” the authors wrote. The bronze items mirror forms of currency based on tools, known as utensil money, discovered elsewhere, such as knife and spade money found in China and Aztec hoe and ax money found in Mesoamerica.

“We do have examples in other areas of the world where you seem to have this sort of similar development” in which “a practical tool turns into this utensil money, and then into this commodity money,” Dr. Kuijpers said.

A central innovation of bronze is the ability to make duplicates by casting the metal in molds. The study speculates that these near-identical copies gave rise, over time, to an abstract concept of weight, which laid the mental groundwork for the invention of weighing tools and technologies that emerged in Europe centuries later in the Bronze and Iron Ages.

Nicola Ialongo, a prehistoric archaeologist at Georg August University of Göttingen in Germany, said that the study offered “an important contribution to understanding how early monies work,” but that there was a less complicated explanation for how these standardized objects emerged.

“As the authors acknowledge, the regularity of their samples might simply be explained by imagining that the objects in their data sets were cast with a limited number of molds, or that the molds themselves had a standardized shape,” Dr. Ialongo said.

Furthermore, he added, ancient peoples might have counted this currency the way we count coins today, rather than focusing on weight.

“Simply put, you don’t need a weight system to be able to use metals — or any other commodity — as money,” he said, adding that many other less durable things may have been used as money before these bronze items.

The authors counter that “weight mattered” because “there are indications that for some types of objects a deliberate effort was made to achieve a specific weight interval.”

Barry Molloy, an associate professor of archaeology at University College Dublin who was not involved in the study, noted that there “has long been a suspicion that systems of weights and measures were in use in Bronze Age Europe.”

“The quest was for a precise metric, as found in Southwest Asia and the Mediterranean,” Dr. Molloy said. “While this paper does not demonstrate that there was such a coherent system, it provides important insights into how ancient people in Europe themselves may have approached these issues pragmatically before formal weight systems were developed in the Iron Age.”

While Dr. Ialongo disagreed with some of the researchers’ methods, he also praised the study as “a remarkable attempt to break one of the oldest and most persistent taboos in prehistoric archaeology, that ‘primitive’ societies do not have a proper commercial economy.”