A Russian volcano long thought to be extinct may be waking up for the first time in human history and could erupt in a similar way to the catastrophic Vesuvius event which decimated the ancient city of Pompeii.

Ominous tremors detected underneath the ice-capped peak of Bolshaya Udina could be the result of moving magma which may signal an imminent eruption.

It is not known when Bolshaya Udina last exploded but researchers detected 559 earth tremors beneath the volcano during May and June of 2018. 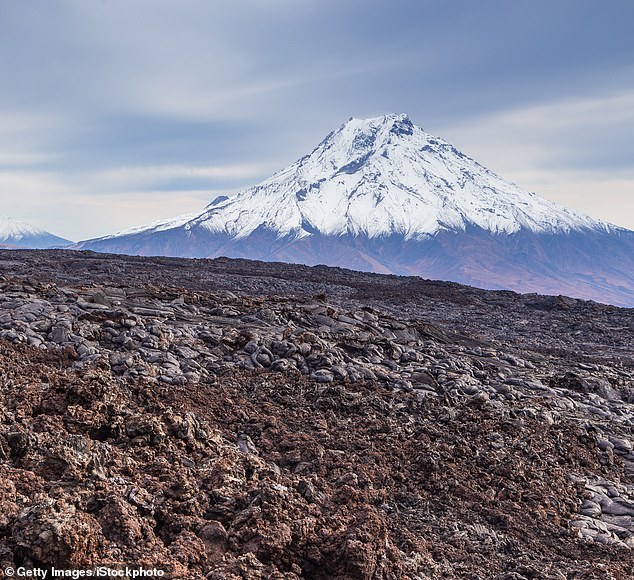 A Russian volcano long thought extinct may be waking up, with the risk that the ice-capped peak of Bolshaya Udina could become a modern-day Mount Vesuvius

Bolshaya Udina is a snow-capped peak that reaches up to 9,580 feet (2,920 metres) above sea level and lies in the centre of eastern Russia’s Kamchatka Peninsula.

Along with its smaller neighbour, Malaya Udina, Bolshaya Udina is a stratovolcano, a steep-sided body that would have built up from alternate runny and explosive eruptions that deposited layers of lava, pumice and ash.

Stratovolcanoes — especially those located near the edges of sinking tectonic plates, like Bolshaya Udina — can build up to violent eruptions thanks to their viscous, slow-flowing magma that traps gases and can build up enormous pressures.

However, it is not known when Bolshaya Udina last erupted and so the volcanic mountain had long been thought extinct and unlikely to erupt again.

Researchers were thus surprised to detect ongoing seismic activity beneath the mountain, suggesting that the volcanic complex may have awoken.

To investigate further, an international team of volcanologists from Russia, Egypt and Saudi Arabia set up four seismic recording stations around the mountain and monitored ground movements in the vicinity during the May and June of 2018.

559 seismic events around Bolshaya Udina were detected by the researchers during this two-month period.

‘When a volcano is silent for a long time, its first explosion can be catastrophic,’ lead researcher Ivan Koulakov of the Trofimuk Institute of Petroleum Geology and Geophysics told Science in Siberia.

‘A large amount of ash is thrown into the air — it is carried far away and not only the surrounding settlements but also large territories all over the planet can suffer.’

‘Recall Pompeii: the awakening of Vesuvius was preceded by a lull for several thousand years,’ he said.

‘And the eruption in Peru in 1600 led to a cooling in Europe and famine in Russia.’ 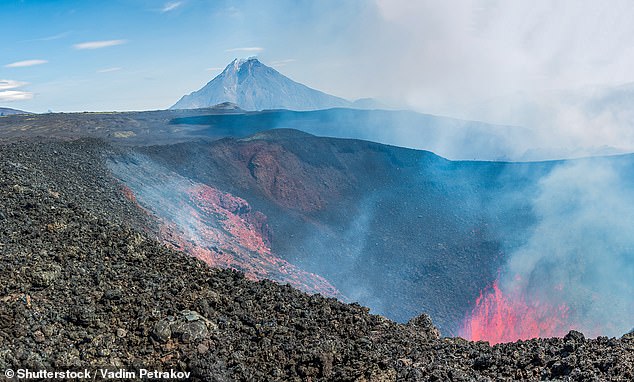 Researchers detected 559 earth tremors coming from beneath the volcano during May and June of 2018 — likely caused by moving magma. Pictured: Bolshaya Udina, with the nearby volcanic cone of Tolbachic in the foreground

Analysis of the seismic signals suggest that they came from an ellipse-shaped cluster of movements under the mountain, around three miles (4.8 kilometres) deep.

‘These seismic properties may indicate the presence of magma intrusions with a high content of melts and fluids,’ the researchers wrote.

This, they continued, ‘may justify changing the current status of this volcano from extinct to active.’

It it presently impossible to say when Udina or even if will erupt, Koulakov said, adding that it will be necessary to monitor the volcano closely going forward.

Vadim Aleksandrovich Saltykov, a researcher from the Geophysical Service of the Russian Academy of Sciences who was not involved in the present study said that there are plans to begin studying the volcano in more detail next year.

It is hoped that this follow-up analysis will enable researchers to pinpoint exactly where beneath the volcano the magma is located. 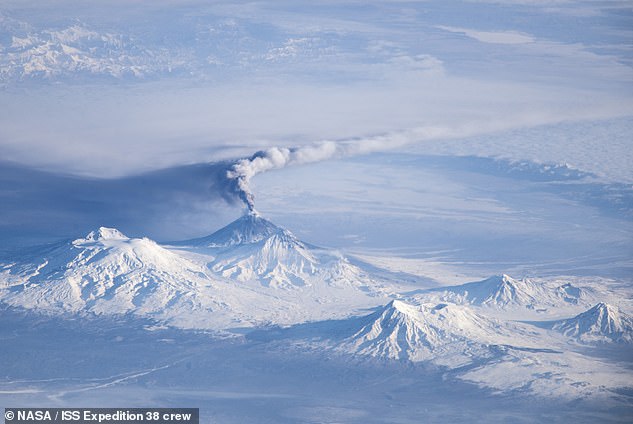 It is not known when Bolshaya Udina last exploded. Pictured, the Kamchatka Peninsula, as viewed from the International Space Station, showing Bolshaya Udina on the far right. The volcano erupting in the centre is Klyuchevskoi

HOW CAN RESEARCHERS PREDICT VOLCANIC ERUPTIONS?

In addition to the motions underneath Bolshaya Udina, Koulakov and colleagues also detected a second cluster of seismic activity that connected the volcano to a nearby region thought to store magma, one dubbed the Tolud Zone.

‘Based on the results of this study we conclude that, during 2018, the Tolud magma source appeared to have built another pathway to Bolshaya Udina,’ they said.

The full findings of the study were published in the Journal of Volcanology and Geothermal Research. 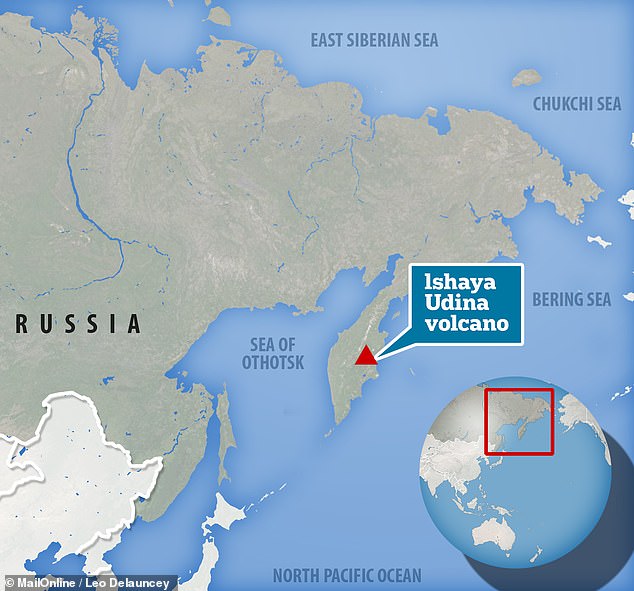 Bolshaya Udina is a snow-capped peak that reaches up to 9580 feet (2,920 metres) above sea level and lies in the centre of eastern Russia’s Kamchatka Peninsula

WHAT DO WE KNOW ABOUT VESUVIUS AND THE DESTRUCTION OF POMPEII?

Mount Vesuvius erupted in the year AD 79, burying the cities of Pompeii, Oplontis, and Stabiae under ashes and rock fragments, and the city of Herculaneum under a mudflow.

Mount Vesuvius, on the west coast of Italy, is the only active volcano in continental Europe and is thought to be one of the most dangerous volcanoes in the world.

Every single resident died instantly when the southern Italian town was hit by a 500°C pyroclastic hot surge.

Pyroclastic flows are a dense collection of hot gas and volcanic materials that flow down the side of an erupting volcano at high speed.

They are more dangerous than lava because they travel faster, at speeds of around 450mph (700 km/h), and at temperatures of 1,000°C.

An administrator and poet called Pliny the younger watched the disaster unfold from a distance.

Letters describing what he saw were found in the 16th century.

His writing suggests that the eruption caught the residents of Pompeii unaware.

Mount Vesuvius erupted in the year AD 79, burying the cities of Pompeii, Oplontis, and Stabiae under ashes and rock fragments, and the city of Herculaneum under a mudflow

He said that a column of smoke ‘like an umbrella pine’ rose from the volcano and made the towns around it as black as night.

People ran for their lives with torches, screaming and some wept as rain of ash and pumice fell for several hours.

While the eruption lasted for around 24 hours, the first pyroclastic surges began at midnight, causing the volcano’s column to collapse.

An avalanche of hot ash, rock and poisonous gas rushed down the side of the volcano at 124mph (199kph), burying victims and remnants of everyday life.

Hundreds of refugees sheltering in the vaulted arcades at the seaside in Herculaneum, clutching their jewellery and money, were killed instantly.

As people fled Pompeii or hid in their homes, their bodies were covered by blankets of the surge.

While Pliny did not estimate how many people died, the event was said to be ‘exceptional’ and the number of deaths is thought to exceed 10,000.

What have they found?

This event ended the life of the cities but at the same time preserved them until rediscovery by archaeologists nearly 1700 years later.

The excavation of Pompeii, the industrial hub of the region and Herculaneum, a small beach resort, has given unparalleled insight into Roman life.

Archaeologists are continually uncovering more from the ash-covered city.

In May archaeologists uncovered an alleyway of grand houses, with balconies left mostly intact and still in their original hues.

A plaster cast of a dog, from the House of Orpheus, Pompeii, AD 79. Around 30,000 people are believed to have died in the chaos, with bodies still being discovered to this day

Some of the balconies even had amphorae – the conical-shaped terra cotta vases that were used to hold wine and oil in ancient Roman times.

The discovery has been hailed as a ‘complete novelty’ – and the Italian Culture Ministry hopes they can be restored and opened to the public.

Upper stores have seldom been found among the ruins of the ancient town, which was destroyed by an eruption of Vesuvius volcano and buried under up to six metres of ash and volcanic rubble.

Around 30,000 people are believed to have died in the chaos, with bodies still being discovered to this day.