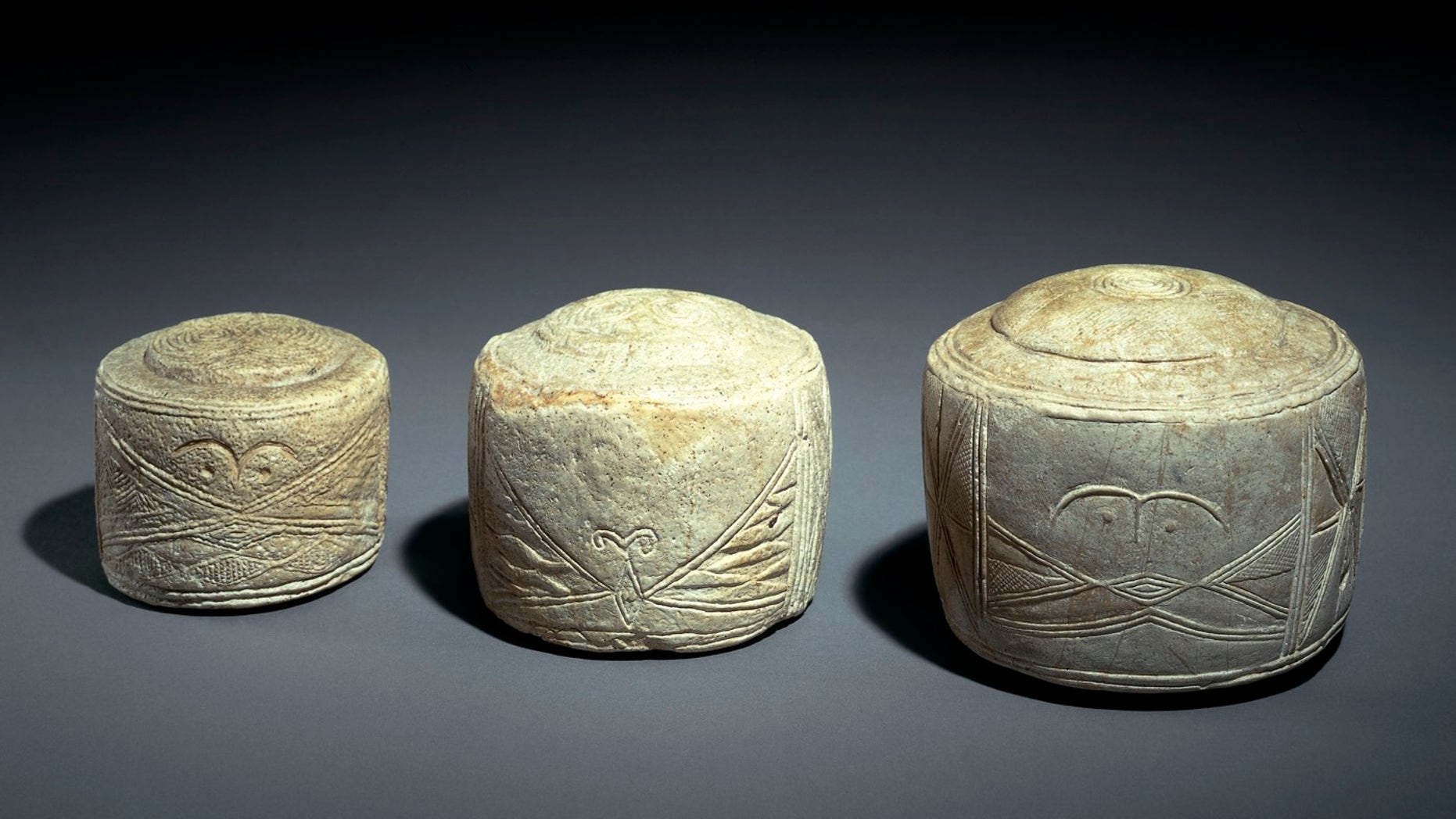 Researchers say these chalk cylinders, carved more than 4,000 years ago, give the exact length measurements used to lay out Neolithic monuments like Stonehenge.
(British Museum)

A set of highly decorated chalk cylinders, carved in Britain more than 4,000 years ago and known as the Folkton drums, could be ancient replicas of measuring devices used for laying out prehistoric monuments like Stonehenge, archaeologists say.

The researchers from the University of Manchester and University College London in the U.K. said that a fixed number of turns of a string around the hand-size objects gives a standard measurement of 3.22 meters — or about 10.5 feet — a length that was used to lay out many Neolithic stone and timber circles.

Due to the location of the find and the cylinders' unusual shape, archaeologists call the objects the Folkton drums. They were thought to be unique until a very similar carved chalk cylinder was found more than 100 years later, in the village of Lavant near England's south coast — it is called the Lavant drum.

In a paper published in December in the British Journal for the History of Mathematics, the researchers say the circumferences of both the Folkton and the Lavant drums are based on multiples of an ancient measure known to archaeologists as a "long foot" of 12.7 inches (32.2 cm).

Previous research suggests this long foot was a standard length for measuring the concentric circles of standing stones and timber posts at Neolithic monuments like Stonehenge and Durrington Walls , an earth henge about 2 miles (3.2 kilometers) northeast of Stonehenge.

Archaeologists from the University of Manchester and University College London have determined that a string wound 10 times around the smallest of the Folkton drums would give a measure of exactly 10 long feet — a length used to lay out several ancient henge monuments .

The lead author of the new study, University of Manchester archaeologist Anne Teather, said it wasn't clear why drums of different sizes were used to give the standard measure of 10 long feet.

"There isn't one answer here, and probably there are several possible explanations," Teather told Live Science in an email.

"We have suggested that the different-size drums all give 10 long feet, but a different subdivision of that measure, so they may have been useful when fractions of the measure were required."

"Another explanation is that the drums were instructional teaching aids that would have been used to demonstrate some of the principles of mathematics and geometry," she said.

Because the Folkton drums were found in the grave of a child, the researchers think the objects could have some sort of symbolic connection to childhood.

"Does this mean that standard measures were somehow associated with children, or growth, or the human life-cycle including learning and the intergenerational transmission of knowledge?" study researcher Mike Parker Pearson, an archaeologist at University College London, wrote in a statement. "These items were almost certainly prestigious, although how, or to what extent they held social power, is unknown," he said.

The archaeologists think the Folkton and Lavant drums are not the actual devices used for prehistoric monuments, but rather replicas.

"Chalk is not the most suitable material for manufacturing measuring equipment, and it is thought that the drums may be replicas of original 'working' standards carved out of wood," wrote University of Manchester archaeologist Andrew Chamberlain, another author of the new paper.

"However, wood is not preserved on most Neolithic archaeological sites and no wooden measuring devices have been found in prehistoric Britain," he said.

The latest research shows that the Folkton and Lavant drums had a very different origin from another type of prehistoric carved object found elsewhere in the British Isles, known as Neolithic stone balls .

More than 500 stone balls, ornately carved by hand about 5,000 years ago, have been found in the northeast of Scotland, in the Orkney Islands, and in parts of England, Ireland and Norway.Researchers have generally ruled out the idea that the stone balls were used to make measurements — it is now thought they were mainly ornamental in purpose.

The Folkton and Lavant drums, however, suggest that the Neolithic monument builders of Stonehenge and other ancient henges possessed specialized geometric knowledge that may have been celebrated or taught to children in their culture.

"The existence of these measuring devices … implies an advanced knowledge in prehistoric Britain of geometry and of the mathematical properties of circles," Chamberlain said.