The discovery of a 9,000-year-old female skeleton buried with what archaeologists call a “big-game hunting kit” in the Andes highlands of Peru has challenged one of the most widely held tenets about ancient hunter gatherers — that males hunted and females gathered.

Randy Haas, an archaeologist at the University of California, Davis, and a group of colleagues, concluded in a paper published in the journal Science Advances on Wednesday that this young woman was a big game hunter, who participated with her people in the pursuit of the vicuña and deer that made up a significant portion of their diet.

The find of a female hunter is unusual. But Dr. Haas and his colleagues make a larger claim about the division of labor at this time period in the Americas. They argue that additional research shows something close to equal participation in hunting for both sexes. In general, they conclude, “early females in the Americas were big game hunters.”

Other scientists found the claim that the remains were those of a female hunter convincing, but some said the data didn’t support the broader claim.

Robert L. Kelly, an anthropologist at the University of Wyoming who has written extensively on hunter gatherers, said that while one female skeleton may well have been a hunter, he was not persuaded by the analysis of other burials that “the prevalence of male-female hunters was near parity.” The researchers’ sample of graves was small, he said, noting that none of the other burials were clearly female hunters.

Bonnie L. Pitblado, an anthropologist at the University of Oklahoma whose specialty is the peopling of the Americas, said the findings were “well-reasoned and an important idea for future testing.” The authors could question gender roles further and what determined them, she said, calling the study “a really refreshing contribution” to studies of early settlers of the Americas. 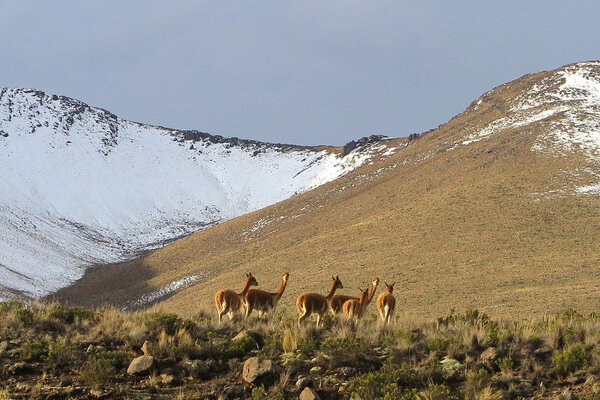 In most contemporary and recent societies of hunter gatherers, Dr. Haas said, it is well-established that hunting is predominantly done by males. Archaeological evidence has tended to support the conclusion that past gender roles were similar. On occasion, female remains have been associated with materials that suggested that they were hunters but the examples have been treated as outliers. What if they weren’t, Dr. Haas suggested, and the overall view of hunting should be adjusted?

He and others found the grave of the young female with the hunting materials at a site called Wilamaya Patjxa in the Puno district of southern Peru at an altitude of almost 13,000 feet. A. Pilco Quispe, a local collaborator, first found artifacts in that area in 2013 near the community of Mulla Fasiri. In 2018, working with community members, Dr. Haas and others excavated an area of about 400 square feet, recovering about 20,000 artifacts. They found five burial sites with remains of six people, one of whom was the hunter.

That find was particularly exciting. One of his collaborators kept finding projectile points, Dr. Haas said, and then a collection of points and other stone tools, with the remains of a skeleton. The group of excavators was thrilled, he said, and the substance of the conversation was, “Oh, he must have been a great chief. He was a great hunter.”

As it turned out, the buried person, who now goes by the scientific identifier WMP6, was female, about 17-19 years old. Her bones were lighter than might have been expected for a male, and a study of proteins in dental enamel, a relatively new technique for sex identification, showed she was definitely female.

Dr. Haas then looked at 429 burials in the Americas from about 14,000 to 8,000 years ago and identified 27 individuals whose sex had been determined who were found with big game hunting implements. Eleven were female and 16 were male. He and his authors acknowledged that the data was not conclusive for these burials, and that the only individual that was undeniably female and a hunter was the person from Wilamaya Patjxa. But, Dr. Haas said, the preponderance of the evidence still led to the conclusion that females were about 30 to 50 percent of the big game hunters.

That conclusion is what Dr. Kelly found unsubstantiated. Two of the burials were of infants, which Dr. Haas and his collaborators described as buried with artifacts that suggested they would be hunters. And he cautioned about reading too much into burials. “The interpretation of grave goods, as a cultural, symbolic act, is not simple or straightforward.”

He had criticisms of the interpretation of the other skeletons as well, and said, “If we accept WMP6 as the only female hunter in the sample, then it suggests the most likely prevalence of female hunters is 10 percent. I would not be surprised at that.”