Isles of Scilly were one large land mass before rising sea levels started dividing it into its current 140 islands around 5,000 years ago, study finds

The Isles of Scilly were once just a single island, before soaring sea levels submerged much of the land to create the archipelago we know today.

Now, there are more than 140 chunks of land which constitute the Isles, but around 5,000 years ago they were a single land mass.

Researchers, led by a team at the University of Exeter, reconstructed sea level rise at intervals of 1,000 years dating back 12,000 years, to show how the land was rapidly engulfed by rising tides. 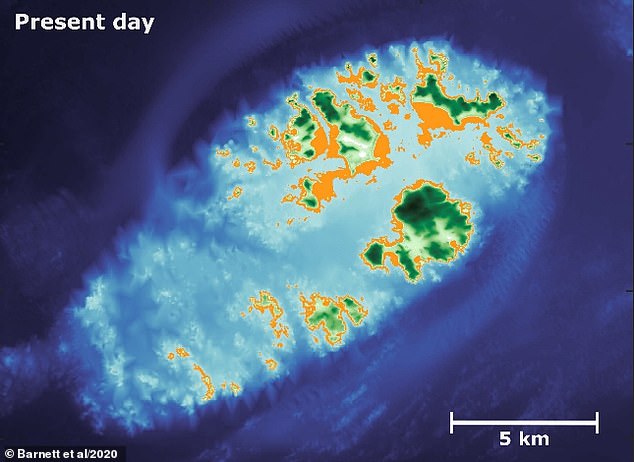 Pictured, a map from the study showing the land masses of the Isles of Scilly a seen today. Anything blue is underwater and green is above sea level 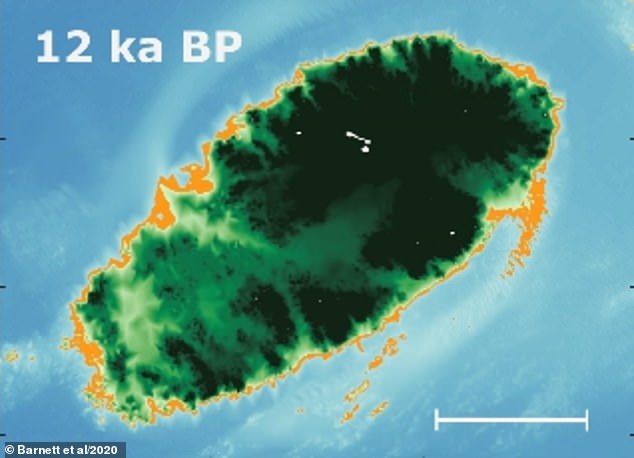 This is what the Isles of Scilly would have looked like before the last ice Age ended, around 12,000 years ago

In the study, which is published in the journal Science Advances, researchers developed a 12,000-year sea level curve for the Isles of Scilly.

They examined this alongside new landscape, vegetation and human population reconstructions based on pollen and charcoal data and archaeological evidence.

These findings suggest that, around 5,000 years ago, land was becoming engulfed by the sea but people adapted to it instead of abandoning their home.

By the Bronze Age, around 4,400 years ago, the area was permanently inhabited by people, archaeologists say.

In fact during this period of time, when the islands were losing land, there was a ‘significant acceleration of activity’, likely due to new fishing opportunities for locals.

About half of this land became intertidal habitats, which may have been able to support the coastal communities, the researchers suggest.

Charlie Johns, co-director of the Lyonesse Project, said: ‘This new research confirms that the period immediately before 4,000 years ago saw some of the most significant loss of land at any time in the history of Scilly – equivalent to losing two-thirds of the entire modern area of the islands.’

After 4,000 years ago, the island group continued to be submerged by rising sea levels, even during years with modest rates of sea level rise.

Mr Barnett said the current rate of mean global sea level rise, around 3.6mm per year, is already far greater than the local rates at the Isles of Scilly that caused widespread coastal reorganisation between 5,000 and 4,000 years ago.

‘In the past, we saw that coastal reorganisation at the Isles of Scilly led to new resource availability for coastal communities,’ he said.

‘It is perhaps unlikely that future coastal reorganisation will lead to new resource availability on scales capable of supporting entire communities.

‘More certain, though, is that societal and cultural perspectives from coastal populations will be critical for responding successfully to future climate change.’

Robert Barnett, of the University of Exeter, said: ‘When we’re thinking about future sea level rise, we need to consider the complexity of the systems involved, in terms of both the physical geography and the human response.

‘The speed at which land disappears is not only a function of sea level rise, it depends on specific local geography, landforms and geology.

‘Human responses are likely to be equally localised. For example, communities may have powerful reasons for refusing to abandon a particular place.’

The research was funded by a grant from English Heritage. 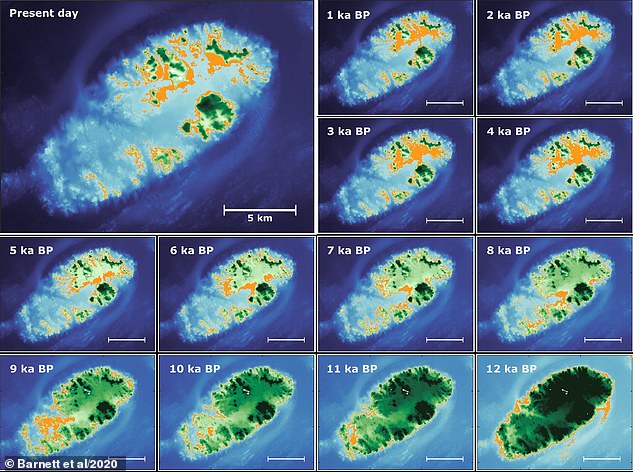 Pictured, the projected shoreline of the Isles of Scilly for every 1,000 year window dating back 12 millennia to before the end of the last Ice Age when the archipelago was one single landmass