Populations of the Weddell seal in the Antarctic are lower than expected, a worrying new study reveals.

The scientists used high resolution satellite imagery and a crowd-sourcing campaign to discover there were about 202,000 adult and sub-adult female seals – a smaller than expected count.

The study also unexpectedly found Weddell seals only inhabited 0.55 per cent of fast ice, which is named as such because it is ‘fastened’ to the coastline.

Unlike drift ice, fast ice does not move with currents and winds and is used by female Weddell seals as a place to give birth. 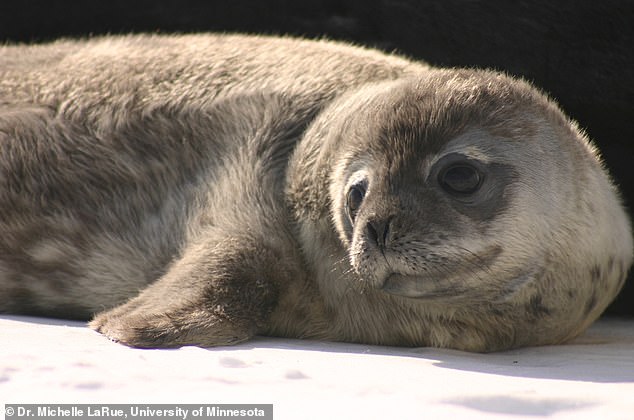 Weddell seals (pictured) are not only cute – they are a key indicator species the Southern Ocean for climate change and conservation. 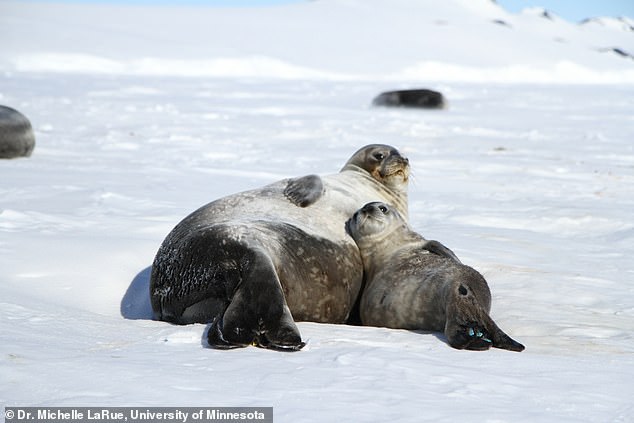 WHAT IS FAST ICE?

Face ice is ice that covers seawater but is attached to land.

It’s defined by the fact that it does not move with the winds or currents.

It acts like a belt around the Antarctic coast, regulating the flow of ice shelves and glaciers into the sea.

Fast ice is an important habitat. In spring, zooplankton feed on the nourishing algae found in the fast ice. Emperor penguins breed on fast ice, and Weddell seals give birth on it.

Male Weddell seals, which spend much of this time maintaining underwater territories, were excluded from the analysis, which has published in Science Advances.

‘This research paper looks at the first ever global population estimate for Weddell seals, which are a really important predator species in the Southern Ocean,’ said lead study author Dr Michelle LaRue at the University of Canterbury in Christchurch, New Zealand.

‘We can now move forward and use this new research to contribute to the best-available science from which to make solid policy decisions.’

Since many Weddell seals live in areas in the Southern Ocean next to Antarctica that are not accessible to humans, the only way to count the seals was to use high-resolution satellite images taken from space.

So, the researchers enlisted the help of hundreds of thousands of citizen scientists to look through thousands of 1,600-foot by 1,600-foot sections of original satellite images and count the seals on the images.

Artificial intelligence (AI) algorithms would not be accurate enough to identify seals from satellite images, Dr LaRue said, so her team used hundreds of human volunteers instead.

‘We worked together with some crowd-sourcing – so working with volunteers – to look at high resolution satellite images, just like you might see on Google Earth,’ she said.

‘We asked folks to come and help us determine whether they saw seals on these images or not,’ she said. ‘And then we went back to the places where there were seals and asked people to count them for us.’

Researchers then used all of that data to do statistical modelling to help them identify Weddell seal habitat and get population estimates.

As well as lower numbers than expected, they found a negative relationship between Weddell seal counts and the size of nearby Emperor penguin colonies, supporting the idea the two species compete for resources.

Weddell seals, found along the Antarctic coastline, are large animals – both adult males and females are about 10 feet (3 metres) long and weigh around 400–500kg

Although they’re among the best-studied marine mammals in the world, scientists have known little about larger-scale patterns in the seal’s distribution, population size or structure.

‘The reason Weddell seals are so important is because they’re a key indicator species for the Southern Ocean, for two primary reasons,’ said Dr LaRue. 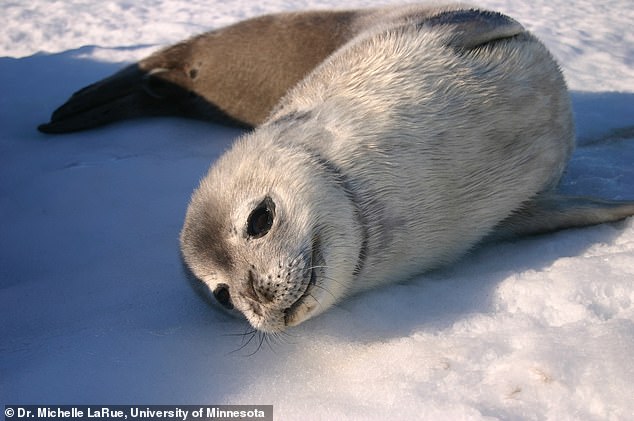 The researchers found a negative relationship between Weddell seal counts and the size of nearby emperor penguin colonies, supporting that the two species might compete for resources 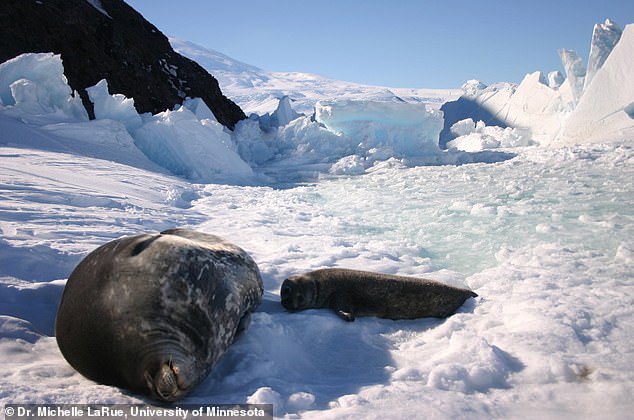 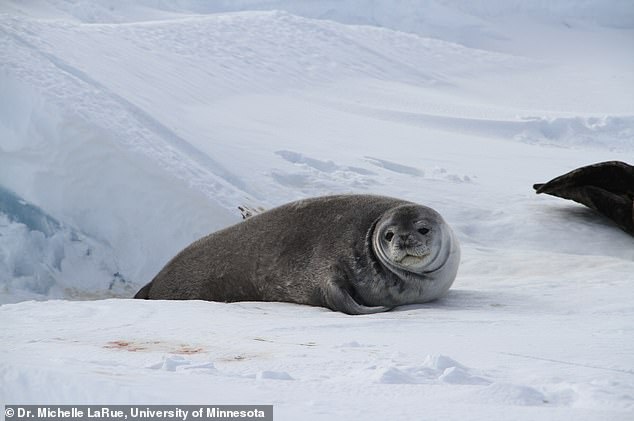 Weddell seals are the most southerly ranging mammal to permanently inhabit the continent. Sightings of the seals have been made in New Zealand and Australia, though they are very rare here

‘The first is that they live on fast ice, which is the ice that is literally fastened to the Antarctic continent – the same habitat that Emperor penguins use.

‘So as the climate continues to change, we may expect that fast ice to change as well.

‘So if we understand where the seals are and how many there are, that gives us an idea of how the ecosystem might be changing.

‘The other reason Weddell seals are so important to understand is because they prey on Antarctic toothfish, which ends up on our plates as Chilean seabass.

‘So they give us an idea about how the ecosystem might be functioning, because Antarctic toothfish are are really important part of the Antarctic ecosystem.’

The study authors say their research has taken a ‘non-invasive approach to studying a sensitive region’ and highlights the potential of remote sensing, rather than fieldwork, for animal population monitoring.

ALL YOU NEED TO KNOW ABOUT WEDDELL SEALS

Description: Weddell seals are large animals. Both adult males and females are about 3 metres long and weigh around 400–500kg. The head is small relative to body size and the colour is usually dappled grey and black on the back with a mostly white under-belly.

Weddell seals are incredibly placid sedentary animals. They can be approached without much apparent stress to the animal. When they haul-out they remain close to their access hole on top of the ice. Underwater they remain relatively close to their breeding colonies, usually within 50–100km though occasional migrations of several hundred kilometres do occur, especially by juveniles.

Weddell seals are the most southerly ranging mammal to permanently inhabit the continent. Sightings of the seals have been made in New Zealand and Australia, though they are very rare here.

Threats: The under-ice environment is relatively safe from air breathing predators such as killer whales and leopard seals.

Special adaptations: Because Weddell seals breath air and live under the fast-ice, they must breath through cracks and holes in the ice cover. There are many cracks in the ice during the warmer summer months.

During winter these openings freeze over and Weddell seals use their canine and incisor teeth to rasp open the new ice and so maintain holes through which to breathe.

Breeding: Weddell seals haul-out onto the stable fast-ice to rest and moult, and for females to pup, returning to the same area each year. Females of 6 years and over give birth in October to 1 pup per year. Pups weigh 25–30kg at birth and mothers care for them for 6 weeks by which time they have grown to 110–140kg. Pups learn to swim and haul-out of the water from 1 week old.

During the breeding season males defend underwater territories from other males for access to breathing holes and females. Both male and female seals vocalise, males may do so to maintain established territories. The only observation of mating (Cline et al, 1971) reported that it took place under water for 5 minutes or more. The male maintained rhythmic body undulations at a rate of 160 per minute.

Diet and feeding: Weddell seals are carnivores. Their food varies with time and location but mid-water (pelagic) and bottom dwelling (benthic) fish, squid, octopus and prawns are common. One seal was repeatedly observed to capture a fish weighing more than 40kg. Weddell seals are very capable divers, remaining under water for up to 45 minutes and reaching depths as great as 720m in search of prey. Lengthy shallow dives are probably exploration dives for new ice holes and food sources.