Home » Science » Apollo 11 Anniversary: Everything You Need to Read on the Moon Landing

On the morning of July 16, 1969, Neil Armstrong, Buzz Aldrin and Michael Collins lifted off for the moon. Four days later, Mr. Armstrong and Mr. Aldrin set foot on the moon’s surface, the first of 12 American astronauts to complete this feat. Apollo 11 fascinated the world, with hundreds of millions tuning in to watch it on TV. It also changed the way we understood our solar system.

Fifty years later, the amazement caused by Apollo 11 has not worn off. The New York Times has been covering the anniversary of the moon landing, looking back at the event’s meaning, and forward to humankind’s next giant leaps in space.

Here is a roundup of some of our reporting this year on Apollo 11.

The story of Apollo 11 never really gets old, nor does seeing pictures of the amazing scenes that surrounded it. From the astronauts preparing for their mission to the rocket launching to those first bootprints on the moon’s surface, we collected some of our favorite pictures here.

There are other ways of looking back at the moon landing too. Photographers for The Times captured people around New York City who couldn’t take their eyes off the mission’s progress. Experience the interactive collection of pictures here. 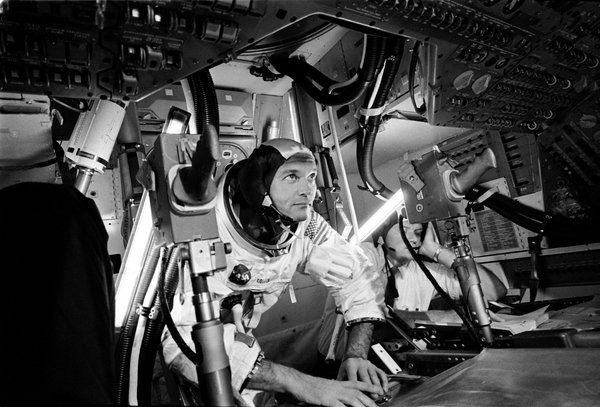 Living history from our journey to space

Michael Collins is often the forgotten astronaut of Apollo 11, who kept an orbital vigil as Mr. Armstrong and Mr. Aldrin touched down on the moon’s surface. Read more about his story here.

Other pioneers never made it to orbit. Ed Dwight was to be America’s first black astronaut, a person in whom the stories of the space race and the civil rights movement briefly met. How the effort to integrate America’s space explorers came up short is told here.

Then there is the vanishing history, such as the big hubs in Southern California and on Long Island that built key pieces of the Apollo spacecraft. The sites are gone, but the stories of people who worked in them live on.

And NASA reopened its restored mission control room in Houston, making a museum piece that is alive, as though the engineers just stepped away briefly.

Why do we go to space? It’s a question we haven’t fully answered, even amid this Apollo 11 nostalgia. Dennis Overbye, a scribe of the science department, provides his own answer here.

Ken Liu, a science fiction writer, closely examined the messages of good will from world leaders left there by the Apollo 11 astronauts. Read his essay about the difficulty that comes with trying to detach our off-world explorations from our conflicts on Earth.

Women were excluded from America’s early astronaut corps, even though it was known at the time that they might outperform men on some measures. Mary Robinette Kowal, a science fiction writer, summarizes the history of gender bias in the space program, and highlights errors to learn from as NASA plans to send a woman to the moon in the next decade.

Finally, how has the conspiracy theory that the moon landing was a hoax persisted? It’s not the internet’s fault, but Amanda Hess explores a new generation of conspiracy theorists who have dug into Apollo 11 for the amusement of their audiences. Read it here.

Going back to the moon won’t be easy

There’s something of a new moon race underway on Earth. But countries like China and India have very different reasons for landing there, as do private companies. Read about them here.

But once we go back, staying for any length of time could be difficult. From dust that cuts like glass to moonquakes and meteorite strikes, read about the hazards of life on the moon here.

Maintaining humankind’s lunar heritage — including the Apollo landing sites — will present challenges because no earthy laws can protect anything on the moon. Read here about the challenges of lunar preservation here.

Some favorites from elsewhere

Zoom in on major moons in our solar system with an engrossing National Geographic interactive atlas.

The Atlantic on how mission control monitored the Apollo 11 astronauts’ vital signs, and what made Mr. Armstrong’s heartbeat spike.

And here’s our guide to TV shows, movies and podcasts worth watching and listening to.