A tiny amphibian that swam through lakes 99 million years ago was the first creature with a slingshot-like tongue it could use to snatch prey out of the air, study finds.

Scientists from the Florida Museum of Natural History uncovered the fossil of a creature known as albanerpetontids with the frog-like projectile tongue.

Researchers say these armoured creatures were ‘sit-and-wait predators’ that had lizard-like claws, scales and tails – but were actually amphibians not reptiles.

They believe the findings redefine how the tiny animals fed, as albanerpetontids had previously been thought to have been underground burrowers.

Named Yaksha petettii, the creature was about two inches long without its tail and would have sat still waiting until a fly or insect came within range for it to grab. 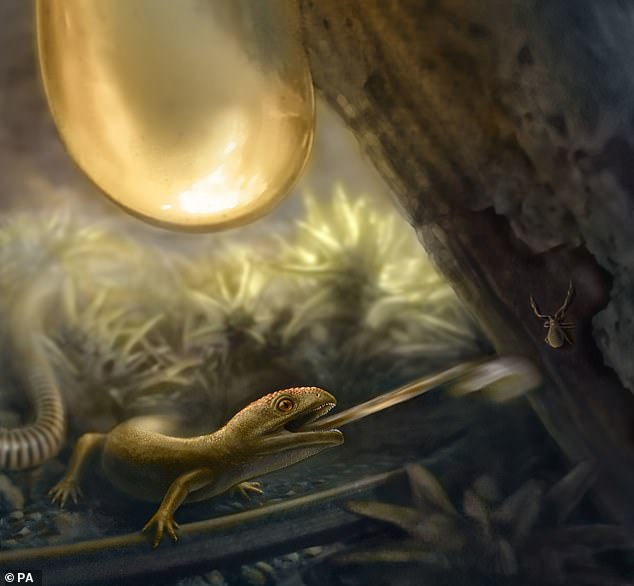 This artist’s impression captures what it may have looked like when the newly-discovered animal waited for its prey with its tongue extended before the tree resin fell on it. As the sap solidifies it turns into amber, immortalising the animal 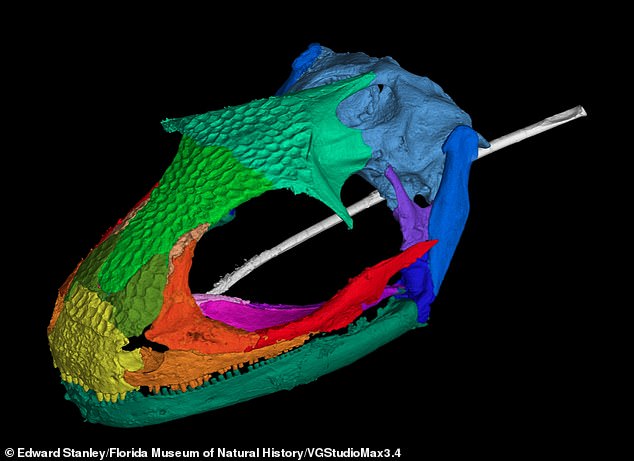 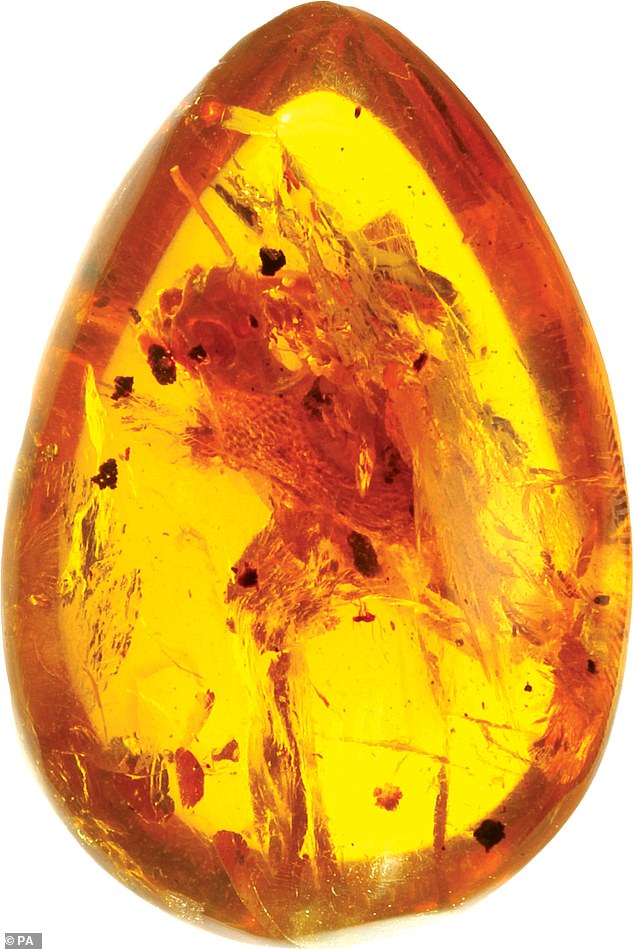 Fossils of the creatures were uncovered in Myanmar, trapped in amber, and a specimen found in ‘mint condition’ gave researchers an opportunity to examine it in detail – revealing the unexpected tongue configuration

Modern-day amphibians are represented by three distinct lineages – frogs, salamanders and limbless caecilians, according to the research team.

However, until two million years ago, there was a fourth – albanerpetontids – whose lineage dates back at least 165 million years.

Study co-author Edward Stanley, said this new discovery adds ‘a super-cool piece to the puzzle of this obscure group of weird little animals’.

‘Knowing they had this ballistic tongue gives us a whole new understanding of this entire lineage,’ he added, explaining that we now know they weren’t burrowers.

Susan Evans, professor of vertebrate morphology and palaeontology at University College London, believes their lineage may be much more ancient.

Evans, who was another co-author on this study, said they may date back to more than 250 million years ago – to the late Permian or early Triassic era.

‘If early albanerpetontids had ballistic tongues, the feature has been around longer than the earliest chameleons, which date back 120 million years ,’ explained Evans.

Fossils of the creatures were uncovered in Myanmar, trapped in amber, and a specimen found in ‘mint condition’ gave researchers an opportunity to examine it in detail – revealing the unexpected tongue configuration.

This specimen was in mint condition,’ Stanley said.

‘Everything was where it was supposed to be. There was even some soft tissue,’ including the tongue pad and parts of the jaw muscles and eyelids.

The researchers say the fossil represents a new species of albanerpetontids, named Yaksha perettii, which is about two inches long without the tail.

‘We envision this as a stocky little thing scampering in the leaf litter, well hidden, but occasionally coming out for a fly, throwing its tongue and grabbing it,’ said Evans.

Another fossil – a tiny juvenile previously misidentified as a chameleon because of its ‘bewildering characteristics’ – also had features that resembled albanerpetontids such as claws, scales, massive eye sockets and a projectile tongue. 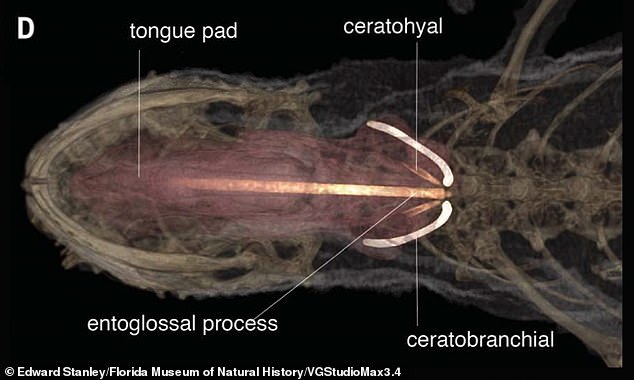 Researchers say these armoured creatures were ‘sit-and-wait predators’ that had lizard-like claws, scales and tails – but were actually amphibians not reptiles 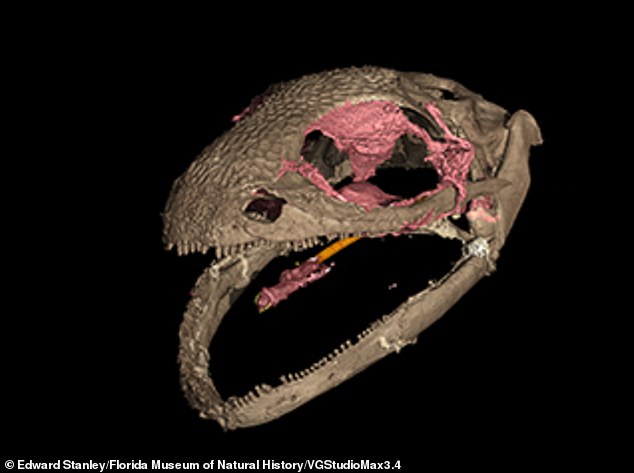 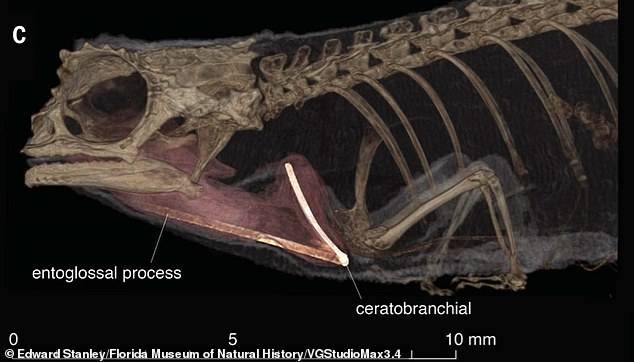 They believe the findings redefine how the tiny animals fed, as albanerpetontids had previously been thought to have been underground burrowers but now know it had a tongue that could shoot out and catch its prey while the creature sat still on a leaf 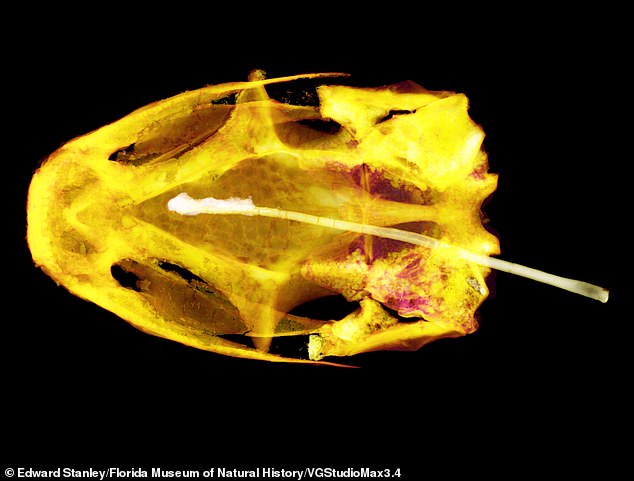 Researchers carried out a range of CT Scans on the ‘perfectly preserved fossils’ to better understand its place in history, and used this to identify it as an amphibian

Evans said the revelation that albanerpetontids had projectile tongues helps explain some of their ‘weird and wonderful’ characteristics.

These include its unusual jaw and neck joints and large, forward-looking eyes – a common characteristic of predators.

They may also have breathed entirely through their skin, as some salamanders do.

Despite the findings, researchers say how albanerpetontids fit in the amphibian family tree remains a mystery.

‘In theory, albanerpetontids could give us a clue as to what the ancestors of modern amphibians looked like,’ explained Evans.

‘Unfortunately, they’re so specialised and so weird in their own way that they’re not helping us all that much.’

The findings have been published in the journal Science.

ARE AMPHIBIANS AT RISK OF EXTINCTION?

More than 40 per cent of the world’s amphibian species, more than one-third of the marine mammals and nearly one-third of sharks and fish are threatened with extinction.

Analysis of the risks faced by the 8,000 or so known amphibian species by the UN and published in the IPBES report has found that up to 50 percent may be at risk of extinction, in a dramatic rise from earlier estimates.

The spike stems from the inclusion of roughly 2,200 species that were previously under-represented due to lack of data; now, based on the new models, researchers say at least another 1,000 species are facing the threat of extinction.

This combined data on their ecology, geography, and evolutionary attributes with the associated extinction risks of each factor to make a prediction.

Only about 44 percent of amphibians currently have up-to-date risk assessments, the team notes.

‘We found that more than 1,000 data-deficient amphibians are threatened with extinction, and nearly 500 are Endangered or Critically Endangered, mainly in South America and Southeast Asia,’ said Pamela González-del-Pliego of the University of Sheffield and Yale University.

‘Urgent conservation actions are needed to avert the loss of these species.’

According to the researchers, the species most at risk likely also include those we know the least about, further adding to the complexity of their protection.

A study published earlier this year found 90 amphibian species have been wiped out thanks to a deadly fungal disease.

It affects frogs, toads and salamanders and has caused a dramatic population collapse in more than 400 species in the past 50 years.

The disease is called chytridiomycosis which eats away at the skin of amphibians and is threatening to send more animals extinct.

Originally from Asia, it is present in more than 60 countries – with the worst affected parts of the world are tropical Australia, Central America and South America.