Fake SNOW could be used to stop the melting of the west Antarctic ice sheet which threatens to flood the world’s coastal cities including New York, Tokyo and Shanghai

Melting ice from the giant West Antarctic ice sheet could be saved from sliding into the ocean by covering it in trillions of tons of artificial snow.

Scientists say the collapse of the sheet would threaten many cities including New York, Calcutta, Shanghai, and Tokyo with catastrophic flooding.

This could be prevented by pumping ocean water onto the edges, or coastal regions, of the sheet and then converting it to snow which would prevent it from melting.

Using a 3-D Parallel Ice Sheet Model (PISM), the researchers artificially enhanced snowfall in these coastal regions on a computer. 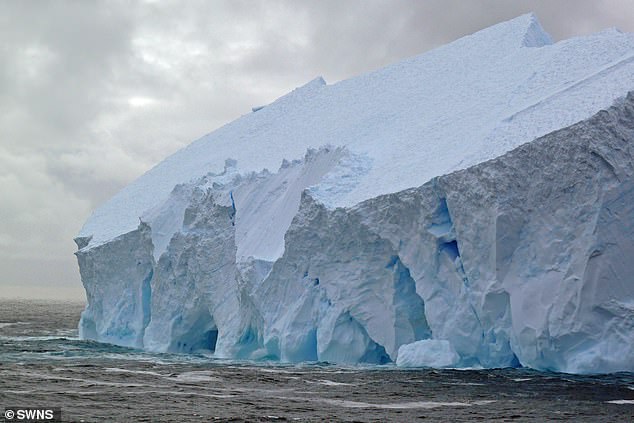 Melting ice from the giant West Antarctic ice sheet could be saved from sliding into the ocean by covering it in trillions of tons of artificial snow. Scientists say the collapse of the sheet would threaten many cities including New York, Calcutta, Shanghai, and Tokyo with flooding

HOW DID THE RESEARCHERS MAKE THE FINDINGS?

The researchers employed computer simulations to project the dynamic ice loss into the future.

They confirmed earlier studies suggesting that even strong reduction of greenhouse gas emissions may not prevent the collapse of the West Antarctic ice sheet.

They investigated what could stop a potential collapse in our simulations and increased the snowfall in the destabilised region far beyond observations.

They found that a lot of snow can indeed push the ice sheet back towards a stable regime and stop the instability.

In practice, this could be realised by an enormous redisposition of water masses – pumped out of the ocean and snowed onto the ice sheet at a rate of several hundred billion tons per year over a few decades.

They found that this huge amount of snow can push the ice sheet back towards a stable regime because the increase in ice surface elevation near the point at which the glaciers meet the ocean effectively stabilises the shelf.

In simulations, this lead to a two to five-centimetre sea level drop, assuming water for the snowfall is taken from the ocean, according to the researchers.

The project would need ‘unprecedented’ feats of engineering – including the installation of several thousand wind turbines in the region to power the ambitious project.

The study claims this would impact the ‘stress balance’ that supports different forms of glacial ice, including frozen inland ice and fast-flowing ice streams.

They say the proposal would create a ‘substantial environmental hazard’ in one of the world’s last pristine regions – to prevent sea level rise for some of the world’s most densely populated areas.

Study co-author Professor Anders Levermann, of the Potsdam Institute for Climate Impact Research (PIK) in Germany, said: ‘The fundamental trade-off is whether we as humanity want to sacrifice Antarctica to save the currently inhabited coastal regions and the cultural heritage that we have built and are building on our shores.

‘It is about global metropolises, from New York to Shanghai, which in the long term will be below sea level if nothing is done.

‘The West Antarctic Ice Sheet is one of the tipping elements in our climate system.

‘Ice loss is accelerating and might not stop until the West Antarctic ice sheet is practically gone.’

Warm ocean currents have reached the Amundsen Sea Sector of West Antarctica – a region comprising several glaciers that are prone to instability, he said.

Underwater melting of the glaciers triggered their speed-up and retreat.

This process is already now responsible for the largest ice loss from the continent and provides an ‘accelerating contribution’ to global sea level rise.

‘Uplifting, desalinating and heating the ocean water as well as powering the snow canons would require an amount of electric power in the order of several ten thousand high-end wind turbines.

‘Putting up such a wind farm and the further infrastructure in the Amundsen Sea and the massive extraction of ocean water itself would essentially mean losing a unique natural reserve. 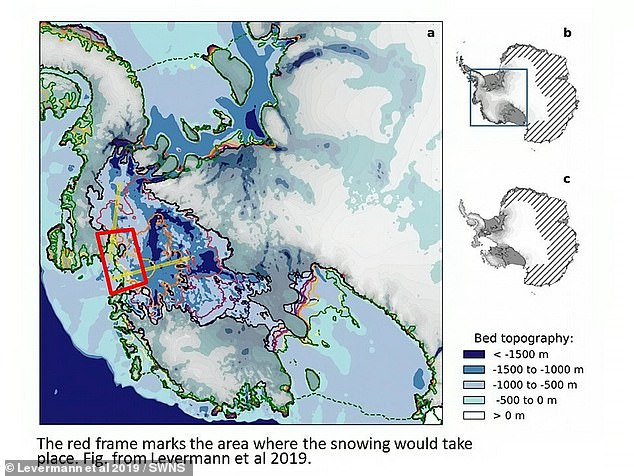 Using a 3-D Parallel Ice Sheet Model (PISM) , the researchers artificially enhanced snowfall in these coastal regions. Here, the red frame marks the area where the snowing would take place 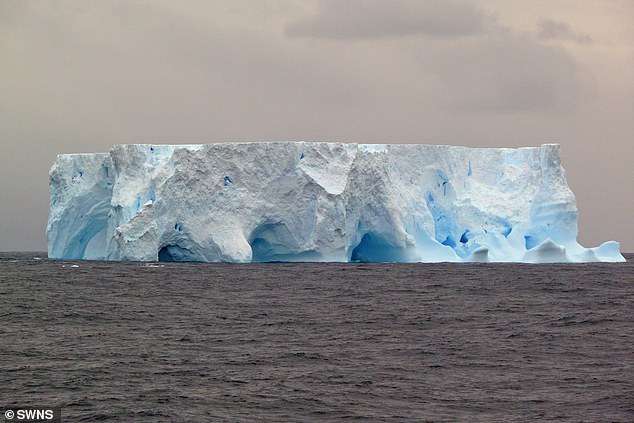 Warm ocean currents have reached the Amundsen Sea Sector of West Antarctica – a region comprising several glaciers that are prone to instability, he said. Underwater melting of the glaciers triggered their speed-up and retreat

‘Further, the harsh Antarctic climate makes the technical challenges difficult to anticipate and hard to handle while the potential hazardous impacts to the region are likely to be devastating.’

He said the risks and costs of such an unprecedented project must be weighted very carefully against its potential benefits.

The simulations show that a minimum of 7,400 gigatons of artificial snowfall applied over 10 years would be required to stabilise the ice sheet.

But the simulations do not include projected ocean and atmospheric warming due to climate change, possible snowfall increase in coming decades, or fracturing in the ice shelf caused by future atmospheric warming, all of which could influence ice sheet collapse.

Dr Robin Smith, Senior Research Scientist at the National Centre for Atmospheric Science at the University of Reading, said:  ‘Sea level rise will be a slow effect of climate change but very hard to reverse, increasing the frequency and severity of flooding of our densely populated coastal cities.

‘Could we stabilise these glaciers by pumping ocean water back onto the ice sheet and letting it freeze again?

‘Theoretically they say the answer is yes, although there are still many unknowns that reduce our ability to accurately predict how these glaciers will really flow and melt in the future.

‘Practically, however, they find that the amount of water you would need to pump is enormous – enough to cover all of Great Britain more than 30 metres deep in water – and as they say, elevating and distributing the ocean water would mean an unprecedented effort for humankind in one of the harshest environments of the planet’.

‘So although such a large-scale geo-engineering scheme is not utterly impossible, reducing greenhouse gas emissions as quickly as possible is clearly still the most reliable way to reduce the many harmful effects of climate change.’

The research is published in the journal Science Advances.

HOW COULD A WARMING ANTARCTICA IMPACT SEA LEVELS?