On the night of January 21, 2019, the Full Moon turned a spectacular red colour as it passed through the core of Earth’s darkest shadow. The so-called Blood Moon eclipse was enjoyed by millions of stargazers lucky enough to be caught in the nightside of Earth that day. But the Blood Moon was not the only spectacle to light up the sky that night, because hundreds of amateurs astronomers reported a bizarre flash of light on the Moon. A team of astronomers from Spain have now confirmed the flash of light was an asteroid striking the Moon at nearly 38,000mph (61,000kmh).

Professor Jose Maria Madiedo of the University of Huelva and Dr Jose L Ortiz from the Institute of Astrophysics of Andalusia presented their finding in the Monthly Notices of the Royal Astronomical Society.

The astronomers have estimated the speedy asteroid left behind an impact crater measuring up to 49ft (15m) across.

The unexpected asteroid struck the Blood Moon around 4.41am GMT, shortly after the eclipse entered totality.

The flash of light caused but the impact was bright enough for amateur moon-gazers to see it with the naked eye. 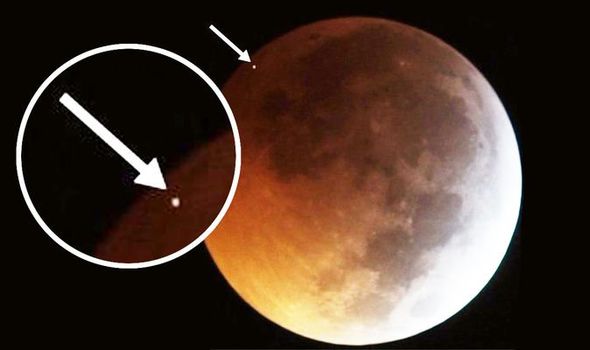 MIDAS is a series of eight powerless telescopes in the south of Spain, all focused on the surface of the Moon.

The telescope system found the asteroid’s impact flash only lasted 0.28 of a second.

The astronomers believe it is the first impact of its kind to be filmed during a lunar eclipse, even though astronomers have reported seeing impact flashes before.

Professor Madiedo said: “Something inside of me told me that this time would be the time.”

Unlike the Earth, the Moon does not have a dense atmosphere to protect itself from powerful asteroid strikes.

And astronomers believe these asteroid impacts could be a frequent occurrence.

The asteroids most likely left behind an impact crater as wide as 131ft (40m) across.

The most recent asteroid is estimated to have weighed around 45kg. 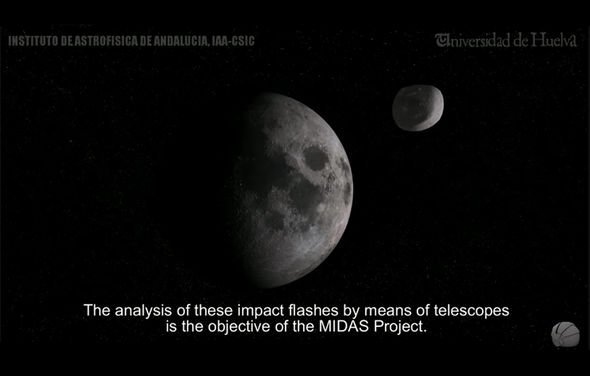 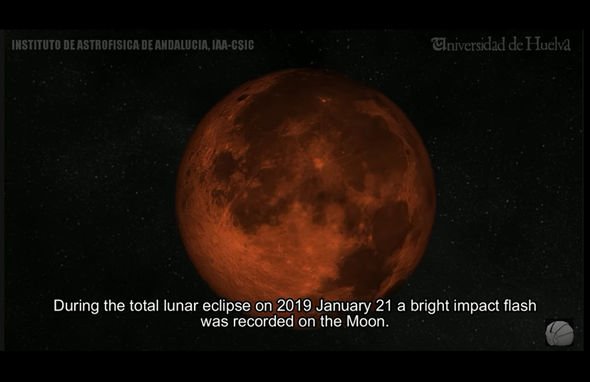 But the space rock would have been tiny ins size, only measuring between 11.8 inches to 23.6 inches (30cm to 60cm) in diameter.

The impact force, however, would have been the equivalent of 1.5 tonnes of TNT.

Professor Madiedo said: “It would be impossible to reproduce these high-speed collisions in a lab on Earth.

“Observing flashes is a great way to test our ideas on exactly what happens when a meteorite collides with the Moon.”